Props to the ROC for starting an alternative energy program.
Some of the projects are pretty small , like solar powered water pumps to irrigate the shool grounds, (to teach the kids about alternative energy), but they are growing bigger. 5 - 10 KW grid-connected systems on government buildings. There are currently seven projects going on in Taidong County alone and I just saw plans for 5 more in Hualien County. Also there is a program for homeowners that will pay 50% for a private system.

For all the bitching I (and others) do about the pinheads in government here, thought I would give a shout out for something good.

I suggest to build a few waste fueled power plants, equip them with a good exhaust treatment, and then burn the rubbish on the streets. That will energize Taiwan for years!

I guess many do include that in the group. And I guess it depends on how you define these terms. From the article:

Would not have thought of grouping this together.

I’m just happy whenever there’s a move away from fossil fuels. Many are now predicting full replacement of all fossil fuels will occur in the next few decades. In any event, I think it’s foolish to not take this seriously.

How are the subsidies for home owners in Taiwan? 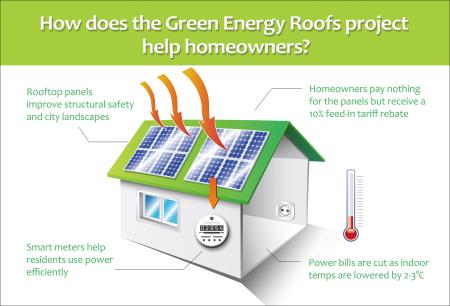 As part of Taiwan’s goal to increase renewable resources to 20 percent of total energy supply by 2025, the government has set out to install 3 gigawatts of rooftop solar power generating capacity across the nation. Toward that end, the Green Energy...

Is it up to local governments how they implement this?

The government’s support for green energy has also made important contributions to the growth of Taiwan’s domestic EV industry, notably through its subsidization of electric scooters. The amount of such subsidies, which are provided by the Ministry of Economic Affairs, the Environmental Protection Administration, and the local Environmental Protection Bureau, varies between counties, with the biggest offered by Nantou County. Customers registered in Nantou can receive up to NT$24,000 per scooter. Taiwan’s increasing use of green energy has been advantageous to its economy. As investment in renewables continues to grow, more gains are expected down

I’ve never understood the lack of solar power in Taiwan, lots of flat roofs high in the sky.
Look more attractive than those corrugated tin roofs they put up.

I noticed they have them in front big new hotel at Danshui fisherman’s port.

Cop23 is bullshit countries bigging themselves up and doing nothing.

Rules should be all new apartments/houses built worldwide should have S/SE facing part solar panel roofs by law.

Rules should be all new apartments/houses built worldwide should have S/SE facing part solar panel roofs by law.

The state parliament of Berlin passed a law that imposes an obligation on private owners of all new buildings and of those that undergo significant roof renovation to install photovoltaic systems. The rule comes into force at the beginning of 2023.

I didn’t know that.
UK Gov only suggesting people or business do it !

So many new builds in the UK going up they need to take advantage.

I wish they would do something about the energy efficiency of buildings (insulation, incentive for more efficient household appliances, etc…) first. I believe that’s where they should improve the most to begin with. But its just my personal opinion.

My only issue with solar in taiwan is the HORRENDOUS land management issues that have always plagued taiwan and contine to do so with this government money trap. Solar is good, and taiwan is more than suitable. But lack of foresight, and intelligence, will eventually probably stain the name of the game due to such mishandling of land that we are seeing now. Its a pity how dumb they are being while trying to promote something to look smart…only children could do such a piss poor job, otherwise it seems its intentional corruption.

Nuclear energy may not be renewable but it has such a high energy density that it might as well be, since even depleted uranium can be turned into plutonium. The problem with nuclear energy is politics. It’s why the 4th plant is taking so long to complete, if ever.

But i think a great deal of caution is warranted when nuclear is coupled with absolute inept corrupt fools running the show. Few argue the science of nuclear, both in the lab and on paper. But in reality its a VERY different situation. One of those situations where ignorance certainly shouldnt be considered bliss. Or perhaps one of those fool me once, shame on you, fool me twice shame on me type situations. Eg: orchid island waste disposal, nuclear plants constant redesigns, solar retardedness and so on in Taiwan. The gov has done quite little, like nearly nothing, to really create any sense of confidence on the subject, just saying.

Because politics prevents science from being actually used, not to mention Taiwan is literally at the mercy of the USA in terms of nuclear energy. Remember Taiwan had once had an atomic weapons program that was shut down by the US. Taiwan has few choices when it comes to reactor designs. We are literally limited to PWR type reactors, and can’t use newer reactor designs that are safer and can be much smaller and have very high (nearly 100%) burn through, meaning it produces no waste and extracts most of its energy in electrical generation, and so any waste is minimally radioactive.

A lot of this is political, not scientific. If we truly listened to scientists then we’d have much more nuclear energy and none of the issues of climate change that we are dealing with.

Yes, so we agree

All im saying.is politics and corruption are the same here currently (and previously), hence the lack of trust for nuclear because these fools cant be trusted with something given their literacy rate in the teal world.

Given the scientific fact that the reality of people now is quite scary, nuclear is also, by proxy, not as safe as it is on paper. Hence why people like me arent pro nuclear while still being both pro environment and pro development.

So the fact is we’re stuck with fossil fuel, because like capitalism, it is the least bad option out there.

So the fact is we’re stuck with fossil fuel, because like capitalism, it is the least bad option out there.

No. Wrong. Its not the least bad, its just currently the most convenient for those of us rich enough to pay for it and privelaged enough not to live somewhere that someone else wants to take it from us.

In fact it may just be the most bad. Put it up there with coal, but with more blood stains.

You can’t power modern civilization without fossil fuel, or at least not without grid scale storage. Nuclear is a perfect carbon neutral baseline load that can reliably power civilization all the time, rain or shine. Renewable energy is intermittent at best and requires huge amount of overcapacity AND grid scale storage to work. The technical problems with renewable is much worse compared to nuclear.

With phaseout of nuclear the only thing to replace it is fossil fuel, as countries trying to found out.