This morning I’m taking the garbage down the dark, dirty, back stairwell from my fourth-floor apt to deposit it below, where everyone in my building dumps their trash when suddenly, on the third floor landing, two average-sized rats lunge right at me, I’m totally startled, grab the railing and yank my feet off the ground, before I realize they’re gray kittens that were terrified of me and scurrying for safety. Unfortunately, there was a large open window right behind me and one of them flew right through. I immediately stuck my head out the window and watched as he tumbled over and over, three stories down to the pavement, before landing on his feet and scurrying away, apparently unharmed. I was impressed. Considering the size difference, that’s probably equivalent to a human jumping out of a 10 or 15 story window without harm. Not bad.

So it inspired me to start this thread. My family has had mostly cats, not dogs, but contrary to popular opinion, cats can easily be trained to perform tricks if one starts early, gives clear commands, and rewards them with food. At least it worked for us, as we trained our cat to sit, shake hands, and speak before she would get her dinner, and to jump up and hit the doorknob when she wanted to go out.

Having grown up with a jumping cat in the house, I therefore wasn’t surprised when I traveled to Myanmar a few years ago and saw these cats at a temple on a lake that have been trained by monks to jump through hoops. 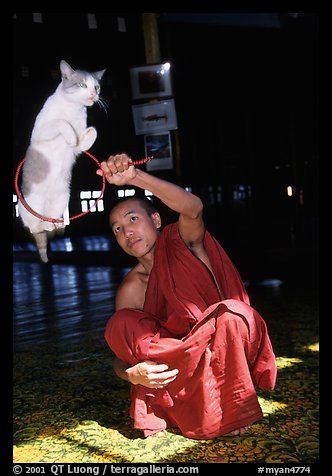 I had a hamster that did back somersaults.

When still living in Xinzhu, I’d pass through a small village called Shuangxi to go to the Science Park to work. In Shuangxi, we would normally get stuck in traffic jams what with all those people trying to get to work. There was a small convenience store, not the chain-type store that are everywhere but the no-name family stores that you sometimes still see. On the front porch, their very old and very very fat dog would usually lie and contemplate the desastrous Taiwan traffic situation. Sometimes he (assuming the sex here) would get up and then you could see that due to age and his excessive weight, he could hardly move. One day in summer, the shop’s manual sliding doors closed to keep the conditioned air inside, I happened to be sitting in my car watching him when he got up, slowly and laboriously limped over to the door which stood just a small crack open, and, with one astonishingly elegant and eerily human move of his lifted left paw, slid the door open unhurridly and went inside. I was gopsmacked. I admit it’s not a great stunt like jumping through a ring of fire or so, but it was so non-chalant, unexpected and looked like a person was doing it rather than an old, overweight dog …