An Underground World of Wonder

My title - this may be a “registration only” for some, thus I will post the entire article. 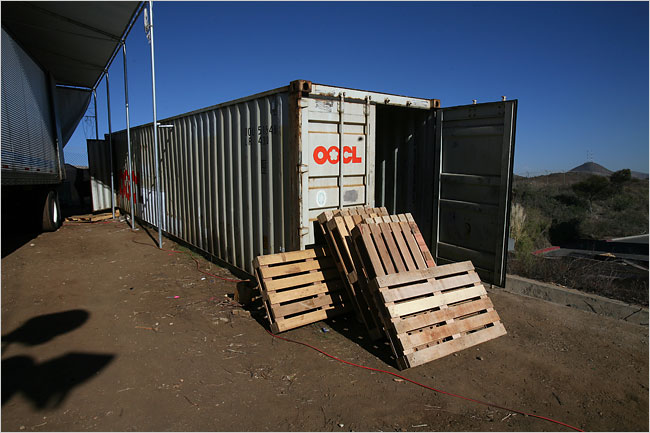 US entry point to smugglers tunnel 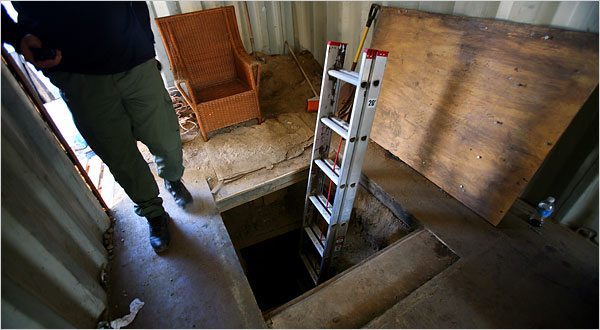 Drug smugglers are using passageways, like this one in Tecate, Calif., to avoid stepped-up border security.

TECATE, Calif., Dec. 6 — The tunnel opening cut into the floor of a shipping container here drops three levels, each accessible by ladders, first a metal one and then two others fashioned from wood pallets. The tunnel stretches 1,300 feet to the south, crossing the Mexican border some 50 feet below ground and proceeding to a sky-blue office building in sight of the steel-plated border fence.

Three or four feet wide and six feet high, the passageway is illuminated by compact fluorescent bulbs (wired to the Mexican side), supported by carefully placed wooden beams and kept dry by two pumps. The neatly squared walls, carved through solid rock, bear the signs of engineering skill and professional drilling tools.

Shrink-wrapped bundles of marijuana, nearly 14,000 pounds worth $5.6 million in street sales, were found in the shipping container and in a trailer next to it, making clear the tunnel’s purpose: to serve as another major smuggling corridor. Found Monday here in Tecate, it is the latest of 56 cross-border tunnels found in the Southwest since the onset of additional guards and fencing aboveground after Sept. 11, 2001.

“I’m never alarmed when they are found,” said a senior investigator with a task force of federal law enforcement agencies still combing the scene Tuesday. “I am alarmed we don’t find them enough.”

The authorities believe that the increased border enforcement has helped deter illegal immigrant traffic and allowed agents to make more drug seizures. But they acknowledge that it has also been driving traffickers to redouble their efforts to find alternative ways of breaching the border.

It is not just tunnels. Immigration agents in San Diego say they are concerned about a spate of rickety boats found in the last year along San Diego County beaches, some having just dropped off illegal immigrants. People smuggled through official border crossings have been discovered tucked into hollowed-out dashboards in vans and trucks and in perilous pockets in vehicle undercarriages.

“It’s like squeezing a balloon,” said Michael Unzueta, the Immigration and Customs Enforcement agent in charge of the San Diego area. “The air has got to go somewhere.”

But the tunnels are now found with alarming regularity, and often just under the noses of law enforcement officers. This latest one is a block from a Border Patrol station and next to a hill that agents often use to watch for illegal immigrant traffic. And in September, a Border Patrol vehicle became stuck in a sinkhole in San Luis, Ariz., 50 yards north of a border fence, that turned out to be a collapsed segment of a smuggling tunnel under construction.

A total of 69 such tunnels have been discovered — 68 along the Southwest border, the other at the Canadian border with Washington State — since the authorities began keeping records on them in 1990. Of that total, 80 percent have been found, mostly through informant tips, since the terrorist attacks, when border enforcement was significantly stepped up. The longest, found last year in the Otay Mesa district of San Diego, stretched nearly half a mile.

Because of concerns that terrorists could adopt the tactic to smuggle radioactive and chemical materials into the United States, a military team checks each underground passageway discovered; no residue from such materials has ever been found.

Most of the tunnels are of the “gopher” variety, dug quickly and probably by small-time smugglers who may be engaged in moving either people or limited amounts of drugs across the border. But more than a dozen have been fairly elaborate affairs like this one, with lighting, drainage, ventilation, pulleys for moving loads and other features that point to big spending by drug cartels. Engineers have clearly been consulted in the construction of these detailed corridors.

The tunnel here has drawn additional scrutiny because just hours after it was discovered, the deputy police chief of the twin city across the border, Tecate, Mexico, was killed in a fusillade at his home, in what appeared to be a cartel assassination. The deputy chief had helped find the passage’s Mexican end.

A Border Patrol agent on routine patrol discovered the tunnel when his drug-sniffing dog reacted to the smell of marijuana several hundred feet away. When the agent entered the container, the Border Patrol said, a man with a pistol in his waistband disappeared deep into the opening.

The tunnel, like the others found, will be sealed at the border and eventually filled with cement slurry.

Though few people have been prosecuted for activities related to the construction of these tunnels, a federal law enacted this year makes it a felony to design or build one, or to participate in smuggling involving it.

There was no answer at the telephone number listed for the owner of the lot where the tunnel was discovered on the American side. But The San Diego Union-Tribune identified him as Flavio Aguirre, an auto broker in Tecate, Mexico, who told the paper that he rented the site a couple of years ago to men who said they operated a furniture-moving company.

The building where the tunnel opens on the Mexican side has been closed by the police. People who work nearby say that drug trafficking is common in the area but that they never saw anything unusual at the building, at least during working hours.

“They are all over here,” one man said of drug smugglers, “but you don’t see anything.”
NY Times[/quote]

Tunnels are used as transit points for people also.

Okay, immigration issues aside … is this tunnel also the site where Saddam’s WMDs will show up. They are kind of overdue somewhat.