Saw this on frront page of “apple daily” on MRT, can’t believe it, more corruption? 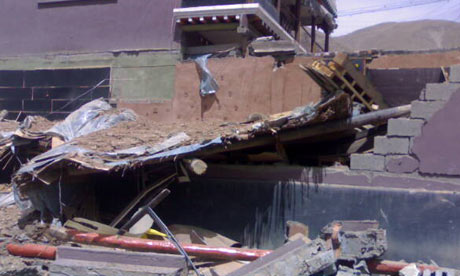 [quote]Thousands of rescue workers search for survivors of China earthquake

Chinese rescue workers were scratching through rubble with their hands in the search for survivors tonight after the country’s biggest earthquake in two years killed more than 589 people and left thousands injured in a remote part of the Tibetan plateau.

Amid warnings that the death toll was likely to rise, the government dispatched more than 3,000 paramilitary police and disaster response specialists to Yushu county, Qinghai province, where 85% of the buildings were said to have collapsed in the hardest hit community.

TV footage of soldiers scrabbling to reach children trapped or buried under collapsed schools rekindled memories of the earthquake that killed 87,000 in neighbouring Sichuan two years ago.

According to the China earthquake networks centre, the 7.1 magnitude earthquake struck at 7.49am at a relatively a depth of six miles below the surface, toppling buildings and shaking Buddhist stuppas and monasteries in the mainly Tibetan region.

“In a flash, the houses went down. It was a terrible earthquake,” Karsum Nyima, the Yushu county television station’s deputy head of news, told the state broadcaster, CCTV. “In a small park, there is a Buddhist pagoda and the top of the pagoda fell off … Everybody is out on the streets, standing in front of their houses, trying to find their family members.”

TV footage showed bloodied survivors milling through the streets of Jiegu, a town 20 miles from the epicentre where reportedly almost every home juddered to the ground either in the first earthquake or during one of 17 powerful aftershocks.

The local headquarters of the Communist party collapsed and the wall of the Yushu hotel was ruptured.

“The streets in Jiegu are thronged with panic, full of injured people, with many of them bleeding from their injuries,” Zhuohuaxia, a local spokesperson, told Xinhua news agency. “The biggest problem now is that we lack tents, medical equipment, medicine and medical workers.”

According to the provincial government about 10,000 are injured. Emergency workers say the tolls could climb.

“Our soldiers have pulled 10 people from the collapsed houses, but four of them had died,” Wu Yong, commander of the Yushu military area command of the Chinese People’s Liberation Army, told Global Times. “The death toll may rise further as lots of houses collapsed.”

As with Sichuan in 2008, a big concern was the stability of a cracked dam, which prompted many residents to flee into the mountains. Yushu is home to the headwaters of three of Asia’s greatest rivers, the Yangtze, Mekong and Yellow, all of which are used for hydropower generation. “A dam has cracked,” Xinhua News Agency said, and “workers are trying to prevent the outflow of water”. The size of the dam and extent of damage were unclear.

Emergency personnel have gone to the area to help search for survivors. Hundreds of specialist rescue workers and reinforcements from the People’s Armed Police arrived at the airport in Xining, the capital of Qinghai province.

Rescue teams said they lacked heavy lifting equipment to shift rubble. “We have to mainly rely on our hands to clear away the debris as we have no large excavating machines,” said Shi Huajie, an army police officer. “We have no medical equipment either.”

According to the Yushu Red Cross, 70% of local schools have collapsed. Many pupils would have arrived shortly before the quake happened, but it is hoped casualties might be fewer than in Sichuan because of the low population density and the lighter building materials. Yushu sits at about 4,000 metres, higher than Lhasa. Homes in this region are often made from earth and wood.

Much of the TV footage highlighted ruins of modern concrete and steel structures, including schools.

Tonight teachers and students slept outside despite sub-zero temperatures and biting winds. Even those with homes still standing preferred makeshift tents to the risk of an aftershock in a damaged building.

“This will be a tough night,” Baima Angjiang, a middle-school teacher, told Chinese Central Television.

Rescue work has been hindered by infrastructure damage. The nearest airport is damaged, roads to the provincial capital are buckled and telecom authorities say 35 of 82 transmission stations are out of action.

The exiled Tibetan spiritual leader, the Dalai Lama, who was born in Qinghai, said: “It is my hope that all possible assistance and relief work will reach these people. I am also exploring how I, too, can contribute to these efforts.” The pope also offered his prayers.

Until recently most of Yushu’s 87,000 population were nomadic Tibetan herders but many have been moved to urban centres under a resettlement policy. The change in lifestyle and tensions over land use are thought to have contributed to unrest in 2008 in Tibetan communities on the plateau.

Local chiefs have issued instructions that domestic media conform to propaganda discipline and officials prepare for an influx of reporters. But the spirit appears to be one of openness.

“We must be ready to accommodate media from outside the province, and let everyone see the spirit of the Qinghai province people, see that we are not afraid of difficulties,” said Jidi Majia, head of the provincial propaganda department.

Tibetan exile groups expressed sympathy but also concerns about the shoddy construction of buildings that many nomads now live in.

However, Stephanie Brigden, Free Tibet’s director, acknowledged that the build-up of soldiers and paramilitaries in the region since the riots of 2008 could have helped save people. “We are encouraged that in response to the tragedy the military have been mobilised to assist in search and rescue.”

The state council, China’s cabinet, set up a quake-relief headquarters which, led by the vice-premier, Hui Liangyu, will oversee epidemic prevention, seismic monitoring and public security. For only the third time in seven years, the government dispatched its emergency rescue team. But with dwellings over a wide area, it could be some time before the team finds everyone in need of assistance.

The quake is unlikely to be the last. Chinese seismologists said it was unexceptional in this seismically active region. Sun Shihong, former chief forecaster in the China seismological bureau, said Yushu was historically an area of violent geological activity. “This is not a one-off phenomenon.”
Printable version Send to a friend Share Clip Contact us larger | smaller EmailClose Recipient’s email address Your first name Your surname Add a note (optional)

Just wait till one takes out the Dam.

Some have it easy, and some don’t.

Giving credit, when credit is due. You decide.

Look at these poor little mongrels. Almost makes me want to go and teach there, except that China is a lunatic asylum.