Arnie: lover of all women

[quote]Mr Schwarzenegger and his chief of staff can be heard speculating on the ethnicity of state Republican legislator Bonnie Garcia, wondering whether she is Cuban or Puerto Rican.

The inspiration for the remarks, Ms Garcia, said she had not been offended and that they had been taken out of context.

Yeah, he just said what everyone else are thinking. Latin women are hot. Hotness. Of course Ms. Garcia is not offended - she’s been called hot!

Gotta love the guy. why the hell would he record these conversations though, and have them on a computer. mind-boggling. Unless he wants people to know he loves the dark meat.

You heard it here first - my prediction: Arnie will let people know how he thinks women of the Orient are hot, because they are so subservient, soft and pearl-skinned, and love to please.

Listening to some of the talk radio stations here in Southern California, my impression was that he was referring more to temprament than looks, as he also mention a man in that context. People working for Phil Angelides, Arnie’s Dem opponent in the upcomiong election, were the ones who leaked the story to the LA Times and may (not conformed yet as far as I know) have hacked into a non-public area of his Web site to obtain the recordings.
mercurynews.com/mld/mercuryn … 506736.htm

[quote=“Jack Burton”]
Gotta love the guy. why the hell would he record these conversations though, and have them on a computer. [/quote]

BFD…at least he hasn’t lied under oath about not having “sex with that woman” and I doubt there will be any cum-stained blue dresses being shown on primetime.

BFD…at least he hasn’t lied under oath about not having “sex with that woman” and I doubt there will be any cum-stained blue dresses being shown on primetime.

No one died when Clinton lied.
(seen on a bumper sticker in the States…)

Yes - the candidate Angelides (spelling?) admitted that his campaign hacked into a computer to get that comment. very stupid to do that (and illegal I imagine)…that will cost Angelides the election imho…Arnie is making lots of deals with all of the interest groups in California right now. he is shrewd!

:saywhat: ja wohl Herr Schwarzenegger! When I was in Vienna recently, the only picture of Arnie that I saw was in a tobacco shop!

He is no longer the favorite son of Austria…

These elections in the US will get nasty in the next 5 weeks!

Angelides, from the little I know, seems to be too cozy with one faction (developers). That doesn’t sell with me for the role of Governor. Whereas, despite his PR blunders (like riding a motorcycle without a license and then pretending that he thought he never needed one), I’ve seen Arnie stick to his guns, and piss people off in every camp, in order to get the job done. That is what California needs in a governor especially with its finance problems.

No one died when Clinton lied.
(seen on a bumper sticker in the States…)[/quote]

Get your political opinions off bumper stickers?

Somehow, I’m not surprised. Maybe you should try the backs of cereal boxes. I suggest Lucky Charms.

No one died when Clinton lied.
(seen on a bumper sticker in the States…)[/quote]

Get your political opinions off bumper stickers?

Somehow, I’m not surprised. Maybe you should try the backs of cereal boxes. I suggest Lucky Charms.
[/quote]

my goodness what a witty response…and the subtle racist remark was a gem! Lucky Charms indeed…

no hard feelings. not at all…we were discussing Arnold’s remarks and it is understandable that someone would get excited. Unsere freund Arnold is sehr exciting, oder?

The only political slogan I am interested in is “Guinness for Strength!” 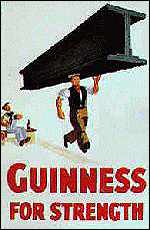 The rest just hold no appeal.

I’m a big fan of Arnie as bodybuilder and actor, but just for fun, here’s an interesting shot from his past (that can’t possibly be tobacco): 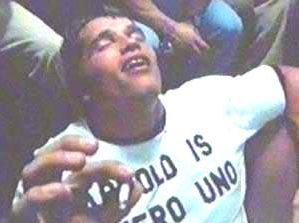 and from the present:

As for Arnie as lover of women, here’s a couple of shots:

I don’t find his comments offensive, because he is absolutely correct.

You know, the amazing thing about surfing that site full of hot latin supermodels…yes, I’ve been surfing it all day, as if there are better ways to spend my time than checking out pictures of hot chicks…anyway, the amazing thing to observe is the sheer variety of ethnic shadings on display. You get to see everything from the obviously of African descent hottie
Rosaria Dawson to the Croatian-Venezualan Aryan beauty Gabriela Spanic.

Which goes to show you, that the term “Hispanic” or “Latino” don’t mean shit. Like North America, they are immigrant societies made up of people from all over the world. The only difference is they speak Spanish (or Portuguese in Brazil) instead of English.

In other words, Arnie is fulla shit. Not all Latinas are superhot supermodels! If that were true, fuck Taiwan, I’m moving to Peru! I don’t care if I can only make $2 an hour, I can live in a hovel off of rice and beans, it’s worth it for my woman.

If you need me, I’m doing research on South American studies with Sofia Vergara. Whoah. Seriously…whoah. She’s a year older than me, but I think I can overlook that little flaw, and accept her as my future wife.