Anybody else see this? Can it possibly be real?
Link here

[quote]The neck-less baby with its head almost totally sunk into the upper part of the body and with extraordinarily large eyeballs literally popping out of the eye-sockets, was born to Nir Bahadur Karki and Suntali Karki at the Gaurishnkar Hospital in Charikot.

The Karki couple is a permanent resident of Dolakha

Can it possibly be real?[/quote]

About as real as the cyclops kitty.

According to the link, the baby weighed 2 kilos, but there ain’t no way, according to the pics, it could be that weight. But that kitty… that does look real… now if it were only a giant cyclops kitty, it’d be really cool.

If that pic’s real, that’s not really a baby. It’s an alien.

Unfortunately, there have been babies born that look like that. They are usually still born or die shortly after birth. I have seen them preserved in formaldehyde at a few different medical schools. Is this particularly baby authentic or a hoax, can’t say. But sadly, deformed and genetically mutant births such as this do occasionally happen.

Edit: do a google image search for anencephaly. It will show a picture very similar to the one posted here.

Poor child. I hope he and others like him rest in peace. And it would be nice if people treated them with some love and care in their short lives instead of parading them around like a freak in a bowl. Basta**s! :fume:

There re links at the bottom of the page, I checked one out and it had some images of other babies with the same condition. How tragic.

I don’t know if that one’s real or not, but I saw a woman in Vietnam carrying a baby with a humongous head, the size of a watermelon. It was so incredibly deformed that I’ve never seen anything like that before or since and if I saw it in a photo I might have thought it was fake.

I agree with taiwalight zone, if its a real baby it’s tragic and the bastards responsible for parading it around like that are sick fucks.

There is a man I’ve seen begging on the sidewalk. He sits propped up in a wheelchair, with the head of an adult but the body of an infant.

I don’t know if that one’s real or not, but I saw a woman in Vietnam carrying a baby with a humongous head, the size of a watermelon.

I’m not denying the fact that anencephaly exists, but surely by now CNN or BBC would have covered it. Anybody can post something on Wiki, but I’d like to see links to CNN or BBC.

At the end of the Wikipedia page:

[quote=“Mother Theresa”]I don’t know if that one’s real or not, but I saw a woman in Vietnam carrying a baby with a humongous head, the size of a watermelon.

Not exactly. I just googled and found out the one word for it is hydrocephalus: an abnormal accumulation of cerebrospinal fluid around the brain, believed to be caused by a combination of environmental and genetic factors, for which tubes are inserted into the skull to drain the fluid (but in poor countries such as Vietnam most victims probably cannot afford such treatment). Here’s what it looks like: 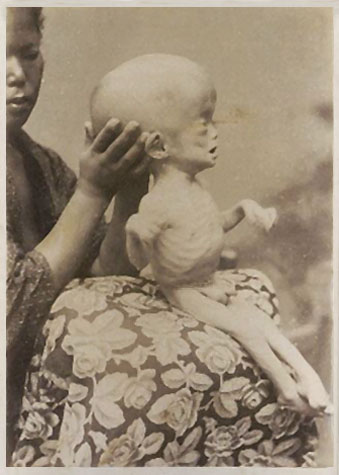 I’m not suggesting that’s what the Nepal photo depicts; just showing that people suffer from the most unimaginable maladies and deformities. Sometimes truth is stranger than fiction.

As for the Nepal photo, that does appear to be genuine. Do a google image search for anenchepaly and you’ll find credible photos such as these. I won’t post them due to their graphic nature, but they seem very similar.

So, I do believe the photo that started this thread is real. Poor mother.

I would imagine those guys were able to parade the baby around the streets because the mother fled the hospital when she saw it.

Wow.
Some of the photos from the first link you posted are mind-boggling!

I’ve seen it first hand in Vietnam in the orphanages, among other deformities in the early 90’s.
I have pictures I took for Doctors Without Borders, and was told that the children usually die within weeks of birth. They did have tubes draining the fluids when I was there.
(No the photos won’t be posted)

So what causes that then? I wouldn’t have thought Nepal would have dangerous environmental contaminants

so the Bizarre part is why did this happen in Nepal

So what causes that then? I wouldn’t have thought Nepal would have dangerous environmental contaminants

[quote]Anencephaly is a cephalic disorder that results from a neural tube defect . . . resulting in the absence of a major portion of the brain, skull, and scalp. . .

Infants born with anencephaly are usually blind, deaf, unconscious, and unable to feel pain. . . There is no cure or standard treatment for anencephaly and the prognosis for affected individuals is poor. Most anencephalic babies do not survive birth. If the infant is not stillborn, then he or she will usually die within a few hours or days after birth. . .

In the United States, approximately 1,000 to 2,000 babies are born with anencephaly each year. Female babies are more likely to be affected by the disorder. About 95% of women who learn that they will have an anencephalic baby choose to have an abortion. Of the remaining 5%, about 55% are stillborn. The rest usually live only a few hours or days. . .