Anyone else catch the action last night? What a great show that was. Hee hee hee. Blair demanding an apology and Howard not just laughing at him but demanding further inquiry. Then all the yahoos making noises and the old guy rising from his seat, “Orrrrdeerrrr, orrrderrrr, there will be no more shouuuuting. If another gentlemen shouts he shall be removed from the chamber.” I’ve hardly ever watched Parliament in session, but that was great. Like something from Masterpiece Theatre. I only wish I’d seen the whole thing. 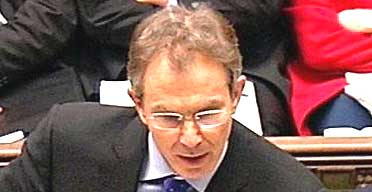 A furious Tony Blair today declared himself totally vindicated by Lord Hutton’s report and turned on his attackers, demanding apologies from both the BBC and the Conservatives. . .
politics.guardian.co.uk/kelly/st … 295,00.htm

[quote=“Andrew Sullivan”]BEEB CHAIRMAN RESIGNS: The much awaited Hutton report is an absolute vindication for Tony Blair and a catastrophe for the BBC. So the BBC Chairman has now resigned. Yay! Here is the BBC’s summary of the findings:

[quote]* Dr Kelly killed himself because of a severe loss of self-esteem as he felt he had lost people’s trust and as he was subjected to the media glare.

It doesn’t get more definitive than that.

Did you see the debate though Tigerman? None of us are qualified to make conclusions regarding the report unless we’ve actually read it. It’s several hundred pages in length and Blair and Howard both used it to support their arguments. And none of us knows for sure whether Blair’s a liar or not.

But regardless of what one believes regarding the underlying facts, that was damn good entertainment. Especially the old guy with his “orrrrderrrrr, orrrderrrr. . .” I couldn’t stop laughing. It’s just a shame they weren’t all wearing white wigs.

[quote=“Mother Theresa”]Did you see the debate though Tigerman? None of us are qualified to make conclusions regarding the report unless we’ve actually read it. It’s several hundred pages in length and Blair and Howard both used it to support their arguments. And none of us knows for sure whether Blair’s a liar or not.

But regardless of what one believes regarding the underlying facts, that was damn good entertainment. Especially the old guy with his “orrrrderrrrr, orrrderrrr. . .” I couldn’t stop laughing. It’s just a shame they weren’t all wearing white wigs.[/quote]

You’re correct, MT… I didn’t see the debate. But the resignation of the BBC’s Chairman is indicitive of something, I would think.

I didn’t see this particular debate… but I’ve seen others and you’re also correct that they are highly entertaining.

Finally, you are once again correct… we cannot know whether Blair was lying… and in the absence of proof that he was, he is right to demand an apology for unsubstantiated allegations… IMO.

The BBC got what it deserved, and I would argue a few more slaps like this for others are needed. So where now is this Leftist argument about the evil perpetrators of the invasion of Iraq? Now we discover from Kay that there may not be wmds after all, but did anyone know this BEFORE the invasion? NO. AND the debate still revolves around whether anyone felt safe with Saddam attempting or having such weapons. Hell when even France and Germany believed that he had them, heck even Saddam himself believed that he did, then the reasons are not whether he should have been removed or not but about the potential threat that he posed. I believe that he did as did many world leaders. The debate was and has always been about the best way to deal with the problem, not that no problem existed.

Second, let’s see if this slap convinces the BBC to report a bit more objectively along with other news groups as well. Where is the big Leftist concern with reporting that stated there was a massacre in Jenin? or that the Afghan conflict would result in 7 million refugees or that the US was bogged down in a quagmire in Iraq or that millions would die of cholera or a civil war would break out, etc etc etc.

To date the only thing that the Bush administration can be found fault with is that no wmds have been discovered YET though it is highly unlikely that they will. Does this mean given the knowledge at the time that he was wrong to make the decisions that he did? I do not think so nor do most sensible people.

But then given the concern over this, where is the equal concern over the very shoddy reporting? Now that we have seen that there was no deliberate attempt to mislead anyone into going to war, it does beg the question… when are so many of these shrill Lefties going to apologize for being so wrong? I am waiting.

[quote=“Lewis Carroll”]The Caterpillar and Alice looked at each other for some time in silence: at last the Caterpillar took the hookah out of its mouth, and addressed her in a languid, sleepy voice. . .

‘Come, my head’s free at last!’ said Alice in a tone of delight, which changed into alarm in another moment, when she found that her shoulders were nowhere to be found: all she could see, when she looked down, was an immense length of neck, which seemed to rise like a stalk out of a sea of green leaves that lay far below her.

‘What can all that green stuff be?’ said Alice. ‘And where have my shoulders got to? And oh, my poor hands, how is it I can’t see you?’ She was moving them about as she spoke, but no result seemed to follow, except a little shaking among the distant green leaves.

As there seemed to be no chance of getting her hands up to her head, she tried to get her head down to them, and was delighted to find that her neck would bend about easily in any direction, like a serpent. She had just succeeded in curving it down into a graceful zigzag, and was going to dive in among the leaves, which she found to be nothing but the tops of the trees under which she had been wandering, when a sharp hiss made her draw back in a hurry: a large pigeon had flown into her face, and was beating her violently with its wings.

‘I’m not a serpent!’ said Alice indignantly. ‘Let me alone!’[/quote]

. . . the only thing that the Bush administration can be found fault with is that no wmds have been discovered YET . . . when are so many of these shrill Lefties going to apologize for being so wrong? I am waiting.

From someone who quotes something about being content etc as the secret to happiness etc, I would ask if this secret works equally well when living under a regime like Saddam Hussein, you know how does one exactly remain content and peaceful when ones legs are going into a wood chopper?

Any help on this would be really great.

Actually Fred, I only started this thread because I felt the debate was terrific entertainment, with opponents making very strong and eloquent statements, tensions very high in the room, all the PMs in attendance making lots of “here heres” and other noises whenever someone spoke, and the overseer (I don’t know his official title) constantly calling for “orrderrrrrrr, orrderrrrr” before stating in a most polite tone that any shouting “will nauuut be tauulerated.” Even if one doesn’t care a hoot about the underlying subject matter, it was great fun to watch.

But as for the subject of the debate, like many, I would hardly deem the Hutton report a holy sacrament and I don’t believe Blair is exonerated.

His report, which clears Blair of blame in the death of arms expert Kelly but castigates the BBC, is said to be biased.

LONDON - Lord Hutton, who led the inquiry into the suicide of arms expert David Kelly, is under fire for not addressing the broader question of whether the government exaggerated the case for war on Iraq. The judge’s response: his remit for the inquiry did not extend to that.

. . . the Independent said, Lord Hutton failed to settle the crucial question of whether Mr Blair took Britain to war in Iraq on false pretences.

‘On the really big picture - did the government exaggerate the case for war’, there was ‘not a word’ from Lord Hutton, said Mr Jeremy Paxman, the presenter of BBC’s Newsnight programme. . .

. . . The opposition Conservatives and Liberal Democrats also renewed their demands for an independent inquiry into the build-up to war.

The Independent quoted Liberal Democrat leader Charles Kennedy as saying: 'The report leaves big questions unanswered. ‘We are still no closer to determining whether this country went to war on a false prospectus.’ . . .Many were amazed at the extent to which Mr Blair escaped censure . . .

. . .The findings surprised many lawmakers and analysts, who had expected Lord Hutton to apportion blame more evenly between the government and the BBC. Instead, The Washington Post said, the report seemed to accept the government’s version of events and directed almost all its fire at the BBC.

‘Lord Hutton has been very severe on the BBC, rightly so in many respects in my view. But he has been overly generous to the government machine and some individuals within it,’ The Guardian newspaper’s political editor Michael White told the BBC.

The National Union of Journalists branded the judge’s report ‘selective, grossly one-sided and a serious threat to the future of investigative journalism’. Labour MP Austin Mitchell added: ‘It is a whitewash, basically. The danger is that it is so one-sided a report that it is going to lose credibility. People just aren’t going to believe it.’

First the BBC now the rest of the well meaning, we know better and it is for your own good reporting brigade.

Ha! Brian Bozo and his right-wing MRC even admit outright at their website that they are “conservative” – that is to say not neutral:

Others are less kind in their criticism of his partisan group:

You’ll have to do better than that Freddy boy.

But, as I said before Fred, right now I really don’t care about the fact that Bush and Blair “sexed up” the evidence to support their war. I just thought the debate was great fun to watch. I especially don’t care about such petty squabbles when it is Friday night and I’m flying off of this island tomorrow for Belgium. Wooohooo. I’ll be sure to practice my french while I’m there.

No actually I do not have to do better than that unless you can prove that this organization would deliberately mislead. Unless of course you are now going to say that any reports out of the following are no longer admissqble becaue of liberal bias:

If you are willing to say all these sites are hopelessly biased then okay, I will agree to withdraw my site as well. But you cannot nor will you will you? hahahah so much for unbiased objectivity eh? but you could always prove that this sites findings are invalid if you can prove that they are biased but you cannot can you. Just like you cannot prove that the bush and blair administrations knew or believed that Iraq did not have wmds prior to the invasion. Any time you can prove this fine by me but until then hahahahah and have fun in Belgium. You will need some encouragement, I am leaving today and the weather is absolute shit.