Apparently this was censored from Urban Dictionary before the backlash against the hypocrisy forced a reversal. Also, it appears that Google doesn’t seem to find articles on Blue Anon unless coupled with other search terms.

The article above leaves out obvious conspiracies pushed by the media like Kavanaugh, Covington Catholic, and most police shootings against unarmed minorities.

I’m not sure that the 1.9 trillion giveaway falls under BlueAnon, but it is based on false pretenses and false information, which puts it in conspiracy theory territory. 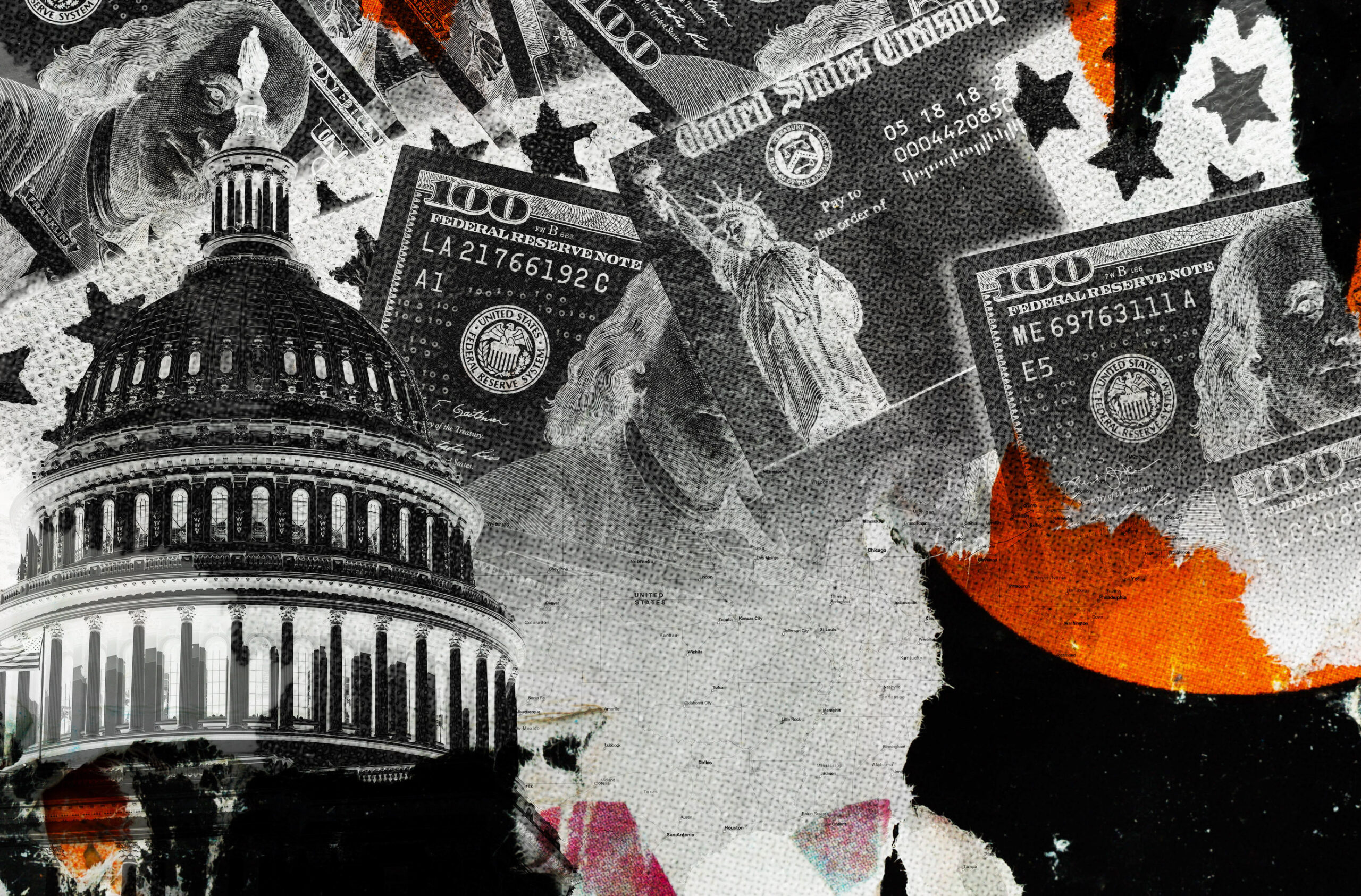 The 'COVID Relief Bill' Is Mostly an Expensive Bundle of Politically...

The Senate is preparing to pass a $1.9 trillion COVID-19 relief bill that has very little to do with the pandemic, and we all know it. Congress should admit as much.

Most countries are doing something similar. It’s a snouts-in-the-trough scenario that no politician, in their wildest wet dreams, ever thought might come true.

It’s an ill wind and all that.

Most countries are doing something similar.

The nerve of countries with resources, keeping people from going hungry and getting evicted.

LOL. Resources? Yes, I guess peons do count as resources.

You need to spend some time in the 3rd world, McNulty. The only difference between there and here is that they don’t even bother to pretend. And people still go hungry and get evicted.

Didn’t hear much complaining about the debt when ol’ what’s his name handed out subsidies left right and center to big pharma, insurance companies, the military.

You need to spend some time in the 3rd world, McNulty.

I’ve spent a lot of time there. You’d be surprised how third world the US is right now.

Well, at least we can agree on something. IMO the US and the UK in particular are slipping back into the dark ages. Civilisation is a fragile thing; it’s pretty easy to bugger it up.

Maybe where you live.

Civilisation is a fragile thing; it’s pretty easy to bugger it up.

Why do you think private jets are flying off the shelves?

Maybe where you live.

We live in the same general area. Why are you unaware? That is the ONLY question.

Ron Johnson is under attack from a press that’s abandoned honesty and fairness.

“Yellow journalism” means a sensationalized press. Perhaps it is time to introduce “blue journalism”—the new media practice of abandoning standards to work seamlessly with the progressive left against any opposition.

A case study is the attempted political assassination of Wisconsin Sen. Ron Johnson. The press has never liked most Republicans. Yet for most of Mr. Johnson’s decade in the Senate, it’s generally described him as what he is: an outsider businessman and fiscal conservative with a focus on deficits and spending. “Wisconsin’s senior senator is a numbers guy, a believer in the power of facts and figures,” wrote Milwaukee Magazine in his first term. In recent years, serving on the Homeland Security and Governmental Affairs Committee, he’s developed a reputation for oversight.

What’s this all about? From the Times story, it amounts to this: Mr. Johnson has refused to brand everyone present in Washington on Jan. 6 as “insurrectionists”; he’s continued to note that last year’s Black Lives Matter protests led to rioting, looting, arson and death; he held hearings on treatments for Covid and 2020 election integrity; and he’s declined, for now, a Covid vaccine, given he had the disease last year and decided to let others go before him.

None of this is remotely conspiratorial or even controversial. Mr. Johnson’s real offense is refusing to roll over to the progressive and public-health police and continuing to ask tough questions.

The Democrat-media complex hates those questions. The Beltway press has a special grudge against Mr. Johnson, since his fact-finding efforts exposed its bias and ineptitude last fall. Mr. Johnson and Sen. Chuck Grassley in September issued a report on Hunter Biden’s sleazy foreign business dealings. Democrats and the media tried mightily to brand it “Russian disinformation,” only to be roundly refuted when the younger Mr. Biden’s business partner and documents later backed up the report, and when news leaked that Hunter Biden was under federal investigation for the sort of transactions Mr. Johnson had brought to light.

Mr. Johnson isn’t doing anything differently now. The only thing that has changed is a press corps that is now brazenly using recent crises to fabricate story lines to the left’s advantage. The recent anti-Johnson pieces are stunning in their willingness to twist the senator’s words or take his positions out of context.

No, he hasn’t diminished “confidence” in mass vaccinations, as the Times claims; he’s repeatedly praised Operation Warp Speed. Some public-health experts have argued that those who have been infected should have lower vaccination priority while supplies are limited. No, he has not “promoted discredited Covid-19 treatments”; he held a hearing with respected physicians who worried that authorities hadn’t been proactive enough in investigating common drugs that might save lives. No, he hasn’t denied “the violence of the mob” on Jan. 6; he’s condemned the lawbreakers repeatedly while asking tough questions about what really happened that day.

How does the Times practice journalism? The piece asserted that Mr. Johnson’s “drumbeat of distortions, false theories and lies reminds some Wisconsin Republicans” of Sen. Joseph McCarthy. It even quoted former Rep. Jim Sensenbrenner, a fellow Republican, saying the infamous senator’s name. But Mr. Sensenbrenner tells me he never said Mr. Johnson was like McCarthy—and the Times knows it. He’d been making a general point about Wisconsin’s love of mavericks (he also mentioned Sen. William Proxmire), and noting that its voters appreciate that Mr. Johnson “thinks outside the box.”

The only McCarthyism going on, Mr. Sensenbrenner says, is being practiced by the left against people like Mr. Johnson “for asking inconvenient questions.” Former Wisconsin GOP Rep. Reid Ribble tells me the Times also called him but didn’t quote him, presumably because he didn’t give the paper what it was looking for: “They clearly went into this with an agenda, they were seeking specific quotes to get to a conclusion.”

Notably missing from these pieces are any real mention of the bigger reason for these unrelenting attacks: 2022. Now that five Senate Republican incumbents have announced they won’t run for re-election, Mr. Johnson may be the last GOP incumbent potentially running in a swing state. (Marco Rubio is up again, too, but Florida has been looking good for Republicans.) Wisconsin Democrats by mid-January had already launched the first TV ads of the 2022 cycle, outrageously tying Mr. Johnson to the Capitol riot.

The blue press is now doing its part to help, serving (to borrow the Times’s words) as the “foremost amplifier of conspiracy theories and disinformation” about the senator. The Democrat-media establishment figures its efforts will cause Mr. Johnson to retire and provide Democrats an easier target next year, or alternatively make him unelectable. Republicans would do well to internalize the Johnson treatment. Much of the press no longer has a commitment to truth, fairness or honesty. Its commitment is to Democratic power.

voters appreciate that Mr. Johnson “thinks outside the box.”

Even though those thousands of people that were marching to the Capitol were trying to pressure people like me to vote the way they wanted me to vote, I knew those were people that love this country, that truly respect law enforcement, would never do anything to break the law, and so I wasn’t concerned,” he said on a right-wing talk radio program. “Had the tables been turned, and President Trump won the election and those were tens of thousands of Black Lives Matter and antifa protesters, I might have been a little concerned.”

You know, the people who broke into the Capitol, beat cops with flagpoles, killed a cop by asphyxiation, and chanted “Hang Mike Pence.”

“the mood among the demonstrators on January 6 was largely ‘positive,’ but there were ‘agents provocateurs’ and ‘fake Trump protesters’ in the crowd”

You know, the guys with MAGA hats and Trump signs, sending selfies saying they invaded the Capitol at Trump’sbidding- the ones who insist it was they who deserve the glory, not leftists or antifa.

Demanded the Senate clerks read aloud the entire ARP bill into the record as a delaying tactic, then was too lazy to stay for the procedure, enabling a Democratic Senator to move to cut the debate time on the actual bill. Since Johnson hadn’t stuck around to oppose it, the amendment was adopted, and the bill was passed quicker than it would have been if Johnson hadn’t interfered.

“You know, there’s a reason Greenland was called Greenland. It was actually green at one point in time. It’s a whole lot whiter now, so we’ve experienced climate change throughout geologic time,”

Wisconsin’s Republican U.S. Senator Ron Johnson . The state’s senior senator has been pushing this unproven remedy since April, when he sent a letter to the president urging he take action on this miracle drug by removing restrictions on its use by the Food and Drug Administration and issuing an executive order overriding any orders by governors or state medical and pharmacy boards regarding usage of the drug.

Or perhaps he showed a great deal of personal bias for attacking the Obama administration for trying to take BP Oil to task after the Deepwater Horizon oil spill for the environmental damage he caused, by categorizing it as “launching an assault on BP” and after some digging, the media found out that Ron Johnson had hundreds of thousands of dollars worth of stock in BP Oil, and he made the excuse of not selling it because he was waiting for the stock market to be better so he could get more money out of it

during the outbreak of Ebola Virus in Africa, warning that ISIS might deliberately infect its own followers with the disease and send them to the United States to deliberately spread it (which is not a viable form of suicide attack, considering people afflicted with Ebola are far from mobile as their body starts getting wracked by the disease, and they have to get blood or feces on anyone they’re attacking without being noticed

And many, many more- just Google “America’s Dumbest Senator”

killed a cop by asphyxiation

More BlueAnon, unless there is an update of which I am unaware. https://www.washingtonpost.com/local/legal-issues/two-arrested-in-assault-on-police-officer-brian-d-sicknick-who-died-after-jan-6-capitol-riot/2021/03/15/80261550-84ff-11eb-bfdf-4d36dab83a6d_story.html