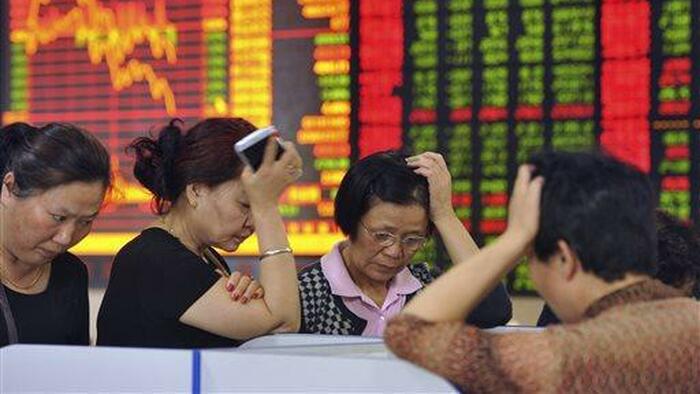 "Evergrande should be held responsible for any consequence that follows because of the chain reaction of the supply-chain crisis."

It’s interesting to see what the mounting crisis in China will mean for their foreign policy?

actually no. That paradigm of “Chinese loss of face” is entirely erroneous. The correct one is “Communist practical deception”. Communists are practical, opportunistic and alway scheming. They are never”provoked”. But they sure want you to think otherwise. The CCP is more communist than Chinese.

Think for a hypothetical pro-Beijing People’s Republic of Taiwan that is willing to be on-paper a puppet regime of the Chinese Communists. Best yet, if it comes at no cost at all to CCP- they would love that idea. Yea if opportunity arises in x-year that they can just annex this socialist republic for free, they would do that too. But that’s because they are opportunistic.

The common misconception that some sort of redline about diplomatic recognition, about the Chinese require special cultural sensitivities ( that if they loose face they will act impulsively) - just one of the many deceptive tools in the United Front toolbox.

United Front doctrine dictates that in order to lower the cost of annexing Taiwan, you befriend any organization (including local governments) in Taiwan that is NOT the central government. Hence split enemy into two, isolate the main enemy and absorb the lesser into your control. You do this infinite recursion. Now ifUS and the West recognize Taiwan’s central government, then United Front fails in Taiwan.

Let us hope so, because this could also mean: now or never, and a good way to distract from domestic problems

Probably not much. They are headed for Japan style decade of stagnation, not an a Brazil style crash. Households and private companies will be hit by the downturn, less so the party, SOE or the PLA. The party also has a lot of economic levers at its disposal.

and private companies will be hit by the downturn, less so the party, SOE or the PLA. The party also has a lot of economic levers at its disposal.

I would watch the repression levers, I think one reason for Xi to up those is the risk of unrest as the stagnation starts to bite.

The economic levers can be overwhelmed easier than the repression ones.

“Be harmonious, enrich the soldiers, scorn all others” - quotation from Septimius Severus.

I mean that’s already happening. Censorship and surveillance is on another level pre-covid. But the party have all the guns, so there isn’t any real risk of upheaval (I mean as a threat to the system, rather than what’s happening in Henan)

China is also a closed loop system as an economy so they can close themselves from shocks as long as they stop money from getting out. They were never serious about internationalising the RMB

China is also a closed loop system as an economy so they can close themselves from shocks as long as they stop money from getting out. They were never serious about internationalising the RMB

There are limits to how much they can isolate themselves, after all, they import high end semiconductors, most of their energy and some foodstuffs.

Further, the system may show itself brittle if upheavals reach a certain mass or size, so they do try to get them early. 1989 was a case in point, they almost had a revolution.

There are limits, but they are also not susceptible to total breakdowns in the system.

The party has systematically taken away any apparatus for dissent since 1989.

No one else finds it bizarre that Nancy Pelosi is (at least temporarily) a right wing hero for doing this? Everyone from Pompeo to Gingrich is egging her on or even asking to come along.

When it comes to “military” matters, the left and the right have always been united.

Yes, I agree. There’s left and right wing hawks, as well as left wing and right wing isolationists/doves. The notion that the right was always tougher on national security is outdated. Drone strikes skyrocketed when Obama took over, who also authorized interventions in Libya, bombings in Syria and the risky operation that took out Osama. Biden was one of the few dissenting voices in the room about the Osama kill operation, didn’t agree with Libya intervention and most recently, left the Afghans to the mercies of the Taliban… so I have no confidence in him intervening to save our asses if China attacks.

But Biden didn’t say no to Iraq?

I still don’t see a Chinese attack in the future. Like seriously. There’s lots of looming problems on the horizon from energy, food, climate etc, that will soon impact pretty much all nations, although unevenly. I am sure many people knew this already but the biggest problem with Taiwan is that the way it is right now it’s not a viable modern nation without trading partners. Oil, natural gas, all imported. Food security, far from 100%. Semiconductors are a kind of luxury. IMHO, real global resource limits will eventually dictate Taiwan’s destiny.

Look at those divisions along party lines! /s

No seriously, when has there ever been basically 1/3, 1/3, 1/3 on anything in the US? It’s always half and half. Taiwanese are better at forming opinions than Americans? Time for the CIA to plan to overthrow the government…

If you go back far enough

My point was that this “invasion” thing didn’t spring out of thin air in 2003.

This is tricky — the US invaded Iraq because of China/Russia.

I’d probably use the word kooky myself

Pretty much every country is less half-and-half than the idiotic political situation in America. People are too dumb and lazy to have real opinions, they just mimic one or the other, so having only one choice (two choices? one choice between two, anyways) makes it easy for them.

Why are we all supposed to hate KMT again? I forget.

The 14th Straits Forum was held in Xiamen in China’s Fujian Province on July 13. To pander to the Chinese Communist Party (CCP), former KMT chairwoman Hung Hsiu-chu (洪秀柱) said she believed the COVID-19 pandemic and the Taiwanese independence movement...

Damnit. Why do the crazies always insist on using women to gain political points?!