I have here a Canon EOS 400D. The camera viewfinder has been modified with the micro prism thing to facilitate manual focus, as the lens is manual focus only. If you stick a EF lens on it the auto focus will work fine and then the micro prism would just be icing on the cake. The Pentax lens was originally made for Pentax K mount but I’ve put an adapter on it to make it fit an EF mount. The camera and the lens is in a good condition and there is one good battery. Comes with a 2G CF card, and I’ll include a card reader as well. It also comes with a camera case.

Selling because I need money but also I don’t really use this camera at all (phones seem to be good enough for most use).

How much just for lens?

Such lens cover are super cheap. I am interested bin lens only. Let me know if u change your mind

I’ll need to look around if I can find the body cover. But if you want the lens you can have it for 1000.

hmmm even if it’s MF I find that cheap. However if’s modern, plastic made version and not an older metal made one. I have paid definitely more than that for similar lenses in the past. 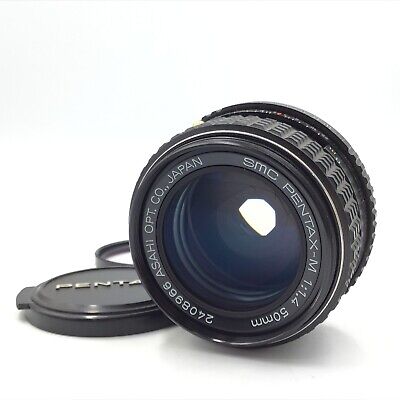 We appreciate your understanding and understanding. We will look for and suggest the best products on your behalf. ・Dusts -A little.

They are made of metal, and it’s very good quality lens. I believe the glass element contains very little radioactivity or something (it’s some special glass).

The reason they are cheap is because there are lots of them out there, so they aren’t particularly collectable. Plus 50mm lens are all over the place. There’s a Canon FD version of the same lens that also don’t cost all that much.

I believe the glass element contains very little radioactivity or something (it’s some special glass).

The problem with radioactive lenses isn’t the radioactivity itself, but that they’re slowing degrading and (I think) yellowing.

I had a 1.2 with that trait that I loved… got stolen along with many other things

Yeah, it struck me as really cheap also, but I don’t know anything about that particular lens. Not my business, but maybe TL should check typical prices before letting it go for too little.

I just posted an ebay link that shows it costs about 1200nt not including shipping.

I actually bought this lens for about that price in Taiwan from Ruten.

Believe me, if I could ask for more I would!

Fair enough - like I said, I don’t know the lens. It just seemed cheap to me. If that’s the going rate, so be it.

Was kinda hoping to just sell the entire set as a package. I really need the money more than the camera. I don’t even use them all that much. If I needed to photo something the phone is more than adequate for 99% of what I need. There’s almost nothing I need a DSLR for, at least in Taiwan.

Yeah, again not my business but I’d be the same (because I wouldn’t want to be stuck with the body with no lens and no cover/cap for the lens hole, whatever it’s called). Maybe you could try posting on Facebook to see if you can sell them as a set.

I also have a DSLR and several lenses sitting around that I haven’t used for several years because I can never be bothered carrying them around anymore. It occurs to me from time to time to try and sell them, but I always figure I might want to use them again someday…

If you need money, sell them, or donate it to a friend if he is in need (he can sell the lens for money).

Honestly unless you are a professional photojournalist, you do NOT need a DSLR. Modern phone cameras are so advanced with advanced AI that they can basically do 99% of what a DSLR can do, except they fit in a small package and you can have them with you at all times. And if you are a professional photojournalist, you would not be using a Canon 400D, you would be using a 5D Mark 4 or whatever new version of full frame cameras they come up with. I really thought about going to mirrorless cameras. They’re far more advanced than traditional SLR cameras, and the more current ones probably have the same AI that phone cameras have, enabling you to take really good pictures.

In case you don’t know, when you take a picture with your phone, the phone actually takes something like 20 pictures, then digitally combines them into something good. The amount of engineering that goes into a phone camera these days are basically insane.

Buy vintage lenses, They are special and i have a huge collection of them and use them over kit lenses. This 50mm i really was looking for because its beautiful bokeh and sharp. These old pentax, takumar, fd , vivtar lenses has unique film look vibe and if u ever get the chance, try helios 44. The best vintage lens ever made

But they cant do one thing yet. Shallower depth of field. But for general audience they are fine

Sure, but have you looked at the newer iphones? They’re giving DSLR a run for the money. They can do shallow depth of field by snapping a bunch of pictures, including out of focus pictures, then digitally combining them. Like I said the engineering is insane, and the AI is probably out of this world.