I like to go to Costco for some hot dogs. But what about…

If you prove it, you can start working off your own repost karma!

you can start working off your own repost karma

我不信！ A true jivanmukta would have no trouble proving a repost, to say nothing of not making reposts in the first place.

Remember folks, even cows can be false prophets.

Speaking of karma and getting back on topic, if you want to protect your furry gods from the karma of killing mice, you can train them to hunt only beings of lesser karmic importance.

Remember, fish are below mammals, but they outrank donuts!

Cat Got Our Tongue — Karma to Burn | Last.fm

The David Bowie space cat is a nice touch.

so that’s how you get allergic to cats, hey?

Only one of mine does this. It is hilarious.

Mad Cat Disease (MCD[2]) is a recently discovered strain of virus, an epidemic of infectious virusness that is rapidly sweeping across the country. It is spread primarily through physical contact, saliva, and spam e-mails. As its name indicates, MCD occurs most commonly in cats, and even more commonly in housecats. MCD causes massive hallucinations, generally of an anthropomorhic nature, in cats and makes them extremely delusional. In mild cases, an MCD sufferer will attempt to walk on its hind legs, pretend to read a magazine, or stare blankly at a television screen for hours on end. More severe symptoms include a realization of their lack of thumbs, attempting to drive cars, and, in rare cases, trying to consume invisible cheeseburgers.

Usually MCD will occur without any warning and infections typically last from two to seven days[3]. Most pet owners notice little difference in their feline companions during a sudden onset of MCD, as, oddly enough, strange behavior is a characteristic closely associated with cats[4]. For this reason, biologists debate the existence of MCD[5], saying that cats are virtually always in a disillusional state, thinking that they are in some way superior to humans. Another theory suggests the cats are correct.

Belief in the invisible

Cats are known for defying several laws of physics[8], and strong belief in objects that are simply not there can cause them to interact with said objects as if they were. This is usually seen in fully functioning normal cats, who chase after invisible objects and hear things that are not there — for example, an invisible rabbit can send them speeding across the front yard. An MCD cat is more severe, however, and can see and make use of objects that do not exist. An invisible swimming pool can make them paddle in midair, and an invisible pillow can suspend them inches above the ground.

One of the most notable cases of an MCD cat’s imagination gone wild was a sphinx cat named Fluffy, who nearly passed through the atmosphere believing he was in the space shuttle. Another cat believed in an invisible cabal[9] and was shot accordingly. An entire clowder of kittens fell through the ground because they had forgotten to believe it existed. One particularly psychotic cat wrecked an entire city with an invisible Hummer, while yet another miraculously saved an entire Sudanese village from starvation by supplying them with invisible sandwiches.

Scientists have yet to explain why it is that cats are powerful enough to disobey the laws of physics, but are very sure it has lots to do with quantum. Most cat enthusiasts agree it is because cats have always made their own rules from the beginning[10]. While other animals have only one life, the cat has nine. While other animals fall to the ground in a heap, the cat can land on its legs. So why not drive invisible cars and suspend disbelief for a few minutes?

The only test for MCD is a simple one. If you question your cat’s behavior at all, take it to the vet and have them run the tests. Just make sure you have a number two graphite pencil, and a scrap piece of paper to work out answers on.

Let’s zoom in on that. 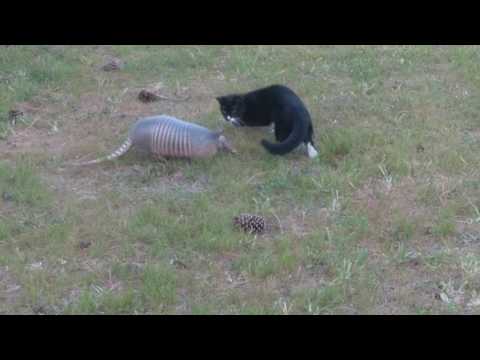 What do you call a temple where they worship cats?

The first one is a repost, but the second one makes up for it.