"According to medical records released by the military, 148 people aboard the Panshi, the supply ship on which the cluster occurred, sought medical treatment 226 times during its month-long trip.

Aside from five visits for fevers, 10 were for upper respiratory tract symptoms."

So 148 people of whatever proportion of the 700 were on that particular ship (of three ships) sought medical attention during the one month. That seems surprisingly high, no?

So 148 people of whatever proportion of the 700 were on that particular ship (of three ships) sought medical attention during the one month. That seems surprisingly high, no?

I’m no expert, but I do think that would be surprisingly high, unless you compare it with Diamond Princess

This should be compared with the past similar sails of vessels.

After Taiwan's government suggested a group of sailors may have picked up coronavirus in Palau, the island nation's government says that is very unlikely.

Quick side question for forumosans: anyone have a list of countries with postal services that are currently operating to/from Taiwan?

Quick side question for forumosans: anyone have a list of countries with postal services that are currently operating to/from Taiwan?

Maybe some partial info in this other thread.

Coronavirus: What can you ship/receive to/from overseas? General Legal Matters

My brother in New York City is in a pretty bad spot as local pharmacies have been stripped bare and he can’t even get sanitizer due to all the panic shopping. I have a surplus of hand sanitizers and want to send him a small 50ml bottle of one in the mail. But my wife said Taiwan won’t even allow one bottle shipped, and I don’t want to lie at the post-office when they ask what I’m sending. Can anyone enlighten me on the official policy? I thought the ban on export of face-masks and sanitizers was…

She’s been around a bit to say the least.

It sounds to me like he was taking the piss out of nz. He says he was in Taoyuan where there were two cases, and he’s made a big point of writing down that he’s wearing two masks and showing it to her. It’s a clear piss-take. He’s suggesting he thinks she’s neurotic about it, possibly because of the amount she discusses hygiene etc at work?

He’s being a tosser.

So his punishment is to wear a mask, not shower/ brush his teeth or wash his clothes, and frantically clomp shuffle around the office as if he’s crazy busy all the time. Oh, and now try to freak out the foreign teacher who has given him the death glare every time she’s had to look at his face because she has video evidence of him with a male student on his lap in the office and the authorities she has spoken to have warned her that reporting that will get her in way more trouble than he would be in.

MND about to be grilled at the Legislative Yuan. TVBS broadcast must be entertaining.

That should be really effective, with a nice bundle of jail and fine as punishment:

As the outbreak is seen as special, spreading rumors about the disease will be punishable under the penal code by a maximum fine of NT$3 million or a maximum prison sentence of three years.

Cabinet to discuss package of relief measures and sanctions on Feb. 20

Jesus there’s some nonsense going on in Kaohsiung. 80 person disinfection team being sent into action. Does anyone think street disinfection is useful in this situation? I think it just looks good on tv.

Korean fish still talking up lockdown as a possibility.

Does anyone think street disinfection is useful in this situation?

Seems like opinions are mixed. May help, will also probably hurt?

If that’s the case, why are so many countries spraying public outdoor spaces?

“In this case, it’s as much to do with wanting to appear to be doing something as it is actually achieving any objective,” Sly said. “It’s really gallons and gallons of disinfectant going down the drain.… The cost-effectiveness is really not there.”

He notes that in many countries that do this, people like to see large-scale action by the government. And they may already have dealt with other diseases in a similar fashion.

“Some of it is culture, tradition, what we like to see happening,” he added. “A little bit is science.” 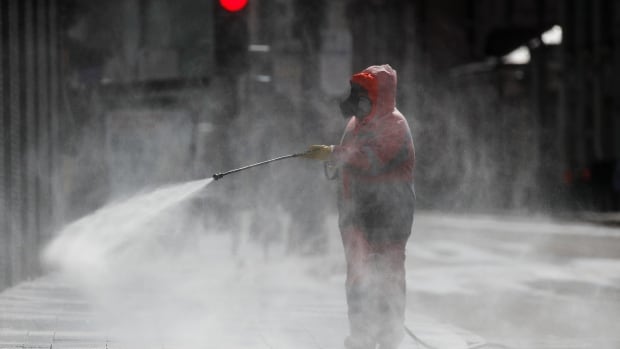 Is spraying disinfectant in public spaces a good way to fight COVID-19? | CBC...

Disinfectant sprays are being used around the world to hose down plazas, church steps, airports, vehicles and even the occasional person. It's part of the effort to stop the spread of COVID-19. But how effective is it? And is it something we should...

So, what about outdoors? According to a variety of local news reports from cities including Shanghai and Gwangju, South Korea, the disinfectant most commonly used outdoors is a diluted solution of sodium hypochlorite, or household bleach. But it’s unclear whether bleach destroys coronaviruses outside, and if it does kill them on surfaces it’s unclear whether it would kill viruses in the air. Bleach itself breaks down under ultraviolet (UV) light. Then again, Leon says, UV light seems to destroy coronaviruses as well. And coronavirus exposure from outdoor surfaces may be limited already: “Nobody goes around licking sidewalks or trees,” Leon says.

There may even be downsides to widespread overzealous disinfection with bleach, notes Julia Silva Sobolik, a graduate student in Leon’s lab. “Bleach is highly irritating to mucous membranes,” Sobolik says. That means people exposed to sprayed disinfectants—especially the workers who spray them—are at risk of respiratory troubles, among other ailments.

Does disinfecting surfaces really prevent the spread of coronavirus?

Outdoor spraying, while widespread, may be futile

Thanks for exploring the space.

Trying to establish if someone came off/on ship on 2/28 holiday in Kaohsiung -Freddy says maybe someone got on board already sick- or someone on in Palau. MND clear as chocolate.

Tsai to address nation at 11. I’ll keep you posted.

TBH they also may have dengue problems so if they can spray against mosquitoes that would be awesome.

EDIT
MND says they did not raise any flags related to the people with fever because they thought they were simply common cold, as they were treated and turned Ok, no big deal. They say they cannot stop operations every time someone gets a cold, then they cannot defend the country. MND boss now in quarantine says he suggested X ray to be sure but the kids were already Ok so the doctors deemed not necessary.

It’s pointless making those excuses because they were obviously wrong. It’s like saying you didn’t know a gun was loaded.