My brother-in-law is probably going to sell his 2001 Fiat Punto 16v ELX (1.2 liter engine, 4-door hatchback). I was thinking about getting it.

He doesn’t particularly like the car and thinks I should buy his old BMW off of him instead. But I hate driving big cars in Taiwan (to say nothing of trying to park them!). And I’m only interested in something simple, low maintenance, and not too expensive, as this would be only for occasional rather than regular use.

I have no idea what sort of price would be fair. Suggestions?

Is this a first? The words “Fiat” and “low maintenance” in the same post?
Anyway, isn’t there a “Blue Book” that lists prices for used cars? I think MJB mentioned such a thing once.

My brother-in-law is probably going to sell his 2001 Fiat Punto 16v ELX (1.2 liter engine, 4-door hatchback)… And I’m only interested in something simple, low maintenance,

[quote=“JD power Survey”]
29 Fiat Punto
Rating 74.9%
Overall ranking 106th
The Punto may be just behind the 206 in the listings, but it is well adrift of the other superminis. It’s also well behind the other Fiat in this group, the Panda, having achieved just one rating not below average – for its running costs.

The Punto scored poorly across the board, but its real Achilles heel was its quality and reliability: every part, from the switchgear to the seats and stereo, caused an above average number of complaints, and the suspension and engine were particularly weak points.[/quote]

My personal opinion of Italian cars and French cars is probably well known by now. but just in case it isn’t “stay away from them at all costs.” That’s if you don’t like having trouble with your ride all the time and easily get tired of shouting at your local mechanic.

I’m afraid your brother in law has a desire for unreliable cars from the two you have mentioned so far. If he thinks they are reliable, then I have nothing more to say really.

Are you sure there is no hidden motive for wanting to sell his cars to you?

FIAT = First In All Trouble

Well, there is a possibility to be happy with Italian cars. The procedure involves taking one’s brain out however. BMWs… from the two models I drove (back in the 80s) one had a just-so-so quality and the other a better-so-so quality (motor electronics gone at 135.000 km/7 years, very expensive to replace), so they are not on my want-to-have list. And OLD BMWs … hmmmm… probably still better than the FIAT I guess.

Nothing against Italy, pasta, wine, all great.

That tells me pretty much what I need to know. Thanks, everyone.

Every red-blooded man should have an Italian car once in his lifetime. Preferably when he’s young and foolish.
Fix it again Tony!

[quote=“redwagon”]Every red-blooded man should have an Italian car once in his lifetime. Preferably when he’s young and foolish.
Fix it again Tony![/quote]
They were thinking of Lamborghini or Ferrari. Not bloody FIAT!
Although thinking back, I DID once have an early-80s two-seater Alfa Romeo spyder convertible thing that was quite a stylin’ little roadster in its time (which was probably 10 years before I ever got my hands on it). Ran pretty well,too. And it was bright red.

My dad had one of these and it transported us all the way down to the South of England once.

Of course, we took a rental car home again.

My village used to call it a loaf tin.

Having said everything bad about Fiat, I admit to wanting a second car just to see the wife drive and that would be this: 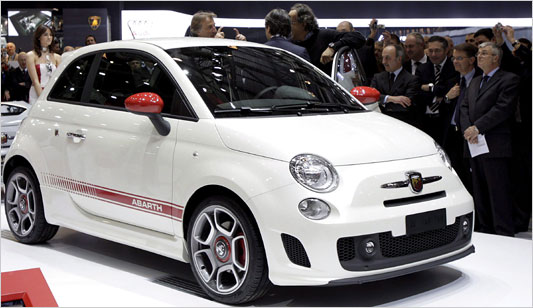 Of course I would still have something Japanese to tow it with.

Old Panda was OK. Very practical and space efficient. Rusted like, er…an Italian car, but most other cars rusted pretty badly (though not AS badly) back then.

Clarkson slagged it off though so maybe my defence is reactive.

new 500 abarth has been pretty reliable as has the new panda its based on… which brings me to something that might shock you.
The highly regarded magazine ‘EVO’ rated the fiat panda 100bhp (which the basic 500 is based on) the best car to buy out of every car they reviewed, thats lambos, ferraris, bmws, audis… every single performance car was below this one :loco:

Hard to believe its BETTER than the best of the germans and japanese can offer, but if its even close the 500 abarth must be an absolute riot to drive.
I want one, NOW!.

Bring the 500 to taiwan, sell it to the handbag girls of taipei and bring a handfull of abarths in with it so i can waste some money on it

FIAT will be invading the USA again soon – disguised as Chryslers.

In Holland we always used to say that French and Italian cars would already rust when they were still brand new in the flyer haha. Very true, at least 10 years back.

The old Panda was any good??? Amazing, most would fully disintegrate within 4 to 5 years! The worst, money could buy.

I had a brand New Fiat Ducato in 1990, total crap quality. No power at all, speedometer would sway left and right (had to guess how much I was doing), my garage found a piece of left-over metal INSIDE the engine after I complained about lots of smoke and poor engine power. On top of that a rear shock broke in two pieces. This all happened before 10.000 km on it. I sold it fast.

If the Fiat is bloody cheap you might as well, if you know its history, which would be a big plus in Taiwan. At least it should keep you dry when you are calling “road assistance” in the morning. If you wish to increase your chances of staying alive in traffic here, than off course the Beamer would the wiser choice. That is also about the only good thing I can say about those highly over rated German cars, including Mercedes. I had 2 new Mercedes’s and have never been in so many garages (always abroad off course, at night and with snow or heavy rain :fume: ) to get my truck on the road again. With rain I even had to keep my shoes on because of the water leaking doors and engine cover. In winter a better idea anyway cos the heater wasn’t sufficient.

Drive carefree and cheap? Go for a 2nd hand Japanese car. Maybe a bit more expensive when you’r buying but easy to earn that back while using plus resale value will still be good after a few years. I can only say I have had excellent experiences with Toyota ( I had about 15 new ones), the same with Suzuki (SJ410), and a little less good with my Mitsubishi Truck. That one was quit good value for money, just its silly 4 cylinder engine wasn’t strong enough and my radiator flooded my interior, exactly 1 week after the 2 year warranty past. I never bought a Mitsubishi again because I was completely left on my own for that, wasn’t even granted a partial repay after I bought a brand new radiator ( I could have gotten a 2nd hand one since I planned to trade that truck in anyway). Mitsubishi would not take my claim in consideration if I would have done that. Off course I was extremely pissed and felt cheated when they turned me down a week later anyway. They could have said so from the beginning.

I once had a strange sound in the gearbox of one of my Toyota Landcruisers, that was 6 months out of warranty at the time and had been fixed fully on expenses of Toyota. Everybody may be making fun of Toyota at this moment, I still find it the most reliable car ever made and would not hesitate to buy again, even now if I had to.

If you would ask me of which car I had the most fun and joy with?
I have had: Land Rover -3, Range Rover-1, Saab-1, Volkswagen-lost count, Suzuki-1, Datsun-several, Nissan-1, Toyota Land Cruiser Pick Up-2, Land Cruiser Custom Wagon-2, Toyota Hilux 2 wd-1, Hilux 4wd-1, Toyota Corolla’s- lost count, Toyota Yaris -1, Mercedes-3, Mitsubishi -1, Chrysler Voyager -2 and the smallest one being a Smart ForTwo with tow hook and caravan behind it.

It was my Smart. Had that silly thing for 3 years, which is quit long for me. I had it for commercial use and it was also my clubbing car. The only size I could park in Amsterdam at night in the centre. Used to sleep in it even (don’t ask how). This week I read that parking along the canals in Amsterdam has become kinda risky now. Our “beloved” 2nd generation immigrant children, originally from a certain North-West African country, find it a fun thing to do and push that type of car over the edge. Whats new… :bluemad:

I hope this will help you choose.

Our old garage embarrassingly had two old Fiat Pandas as loan cars for the rich landowners that would drop off their Subaru Legacys and Isuzu Troopers for service. They were floored everywhere they ever went and they never ever broke. Well aside from almost all of the body work that is. Oh, and the heaters almost never worked in them. We used them once or twice to go out and recover four wheel drives from snow drifts as other cars wouldn’t get there with stupid fat road tyres on. I have to admit they were the crappest, great car ever. I’d certainly have another Fiat over a BMW or a Merc. At least I could afford an endless supply of spares for a Fiat. I think of the old Panda as a car perhaps designed by Airfix.

I think the only way to find an odd sound around the gearbox area of a Landcruiser is if you actually cruised over a pushchair and managed to get it all caught up in the propshaft. We used to get a few of them in and they always ran like clockwork.

I admire anyone who has had an SJ410. They were the absolute boy scout’s 4x4. If you haven’t ever driven one off-road, then you have never really been offroading I reckon. RangeRovers are for people who prefer being isolated from the rough of reality. The same type of people that wear Gore-Tex and hollofibre to go mountaineering when all a real man needs is some hessian underwear and a tot of whisky for the top.

Gay car of the year though? If it isn’t the first one here, then it has to be awarded to the second for certain.

Fuck it and thumb?