I have to include the 1950s (You can spank me) because this decade joins the 70s as another great period in cinema. The 50s were great not only in American films, but also Italian, Japanese, French, and Swedish films as well.

My favorite movie of all time period is Rear Window. This movie is more scary (in a smart way) and suspenseful than those horror movies out there. Jimmy Stewart never leaves his wheelchair (except in the final scene where he is pushed out the window), but you get drawn into his mental world, what he sees, and identify with his ‘sinful’ curiosity. I particularly liked the sequence where he uses his camera flash bulb as a weapon against Ray Burr

And Grace Kelly was just drop dead gorgeous in her costumes. She adds substance to style by conspiring with Stewart, and breaks into Burr’s apartment herself to help Stewart search for evidence. (Kelly is a Pennsylvanian. :bravo: )

Also liked Roman Holiday. Audrey Hepburn’s scream of horror when Gregory Peck pulled out his arm from the wall’s mouth was actually real. Peck played a joke on her by pretending something was mangling his hand inside. The director chose to include that scene in the movie because Audrey’s reaction was spontaneously genuine.

Loved The Seven Samurai. It’s got humor, humanity (helping others in distress), and action sequences. The scene where Mifune is holding the baby in the river, saying “I was once a baby like this too” was quite touching.

I watched High Noon, but I think the movie is a little overrated.

There’s some good movies.
I’m glad you said soft spot and not all time favorite.
Brando and Bogie
Some Like it Hot

Orson Welles’ Touch of Evil. There are better movies on that list (Seven Samurai, Vertigo, Rear Window) but this one lets Charleton Heston act and you get to ask yourself what Marlene Dietrich is doing in Mexico.

My favourites there are Ikiru and 400 Blows - two of my all time favourite movies ever.

I’d add Tokyo Story (Ozu) too, if it was an option. Oh and A Bout de Souffle (Breathless)

Other greats not in your poll are Rashomon, Pather Panchali and Smiles of a Summer Night (one of the few Bergman’s I really like).

I’d add Tokyo Story (Ozu) too, if it was an option.

Ozu was great. All of his movies had a Zen-like similarity.

What makes this movie work so well – it’s also what makes Joss Whedon’s equally good Serenity a great B movie of the two thousand aughts – is the teamwork. The great team-centered dialogue as a reaction to implacable evil is what’s at the heart of the appeal. John Carpenter’s 1982 version was pretty good, too. By the way, in this 1951 original the director was Christian Nyby in the credits, but it’s said that Howard Hawks took over partway through filming. My ear tells me that Hawks was behind the great dialogue (and Ben Hecht, too: let’s never forget Ben Hecht). Nyby’s and Carpenter’s films benefit from the location – arctic cold and isolation – which in Nyby’s version helped immensely in making a 7’ carrot scary.

The dialogue is dated now, of course. Back in the day, before cable tv, this movie started popping up late on weekend nights. That’s when I first saw it, maybe 1970, and memorably the experience filled me with equal parts terror and hope.

I also have a soft spot for de Sica’s Umberto D, obviously. The old guy’s story just breaks my heart. 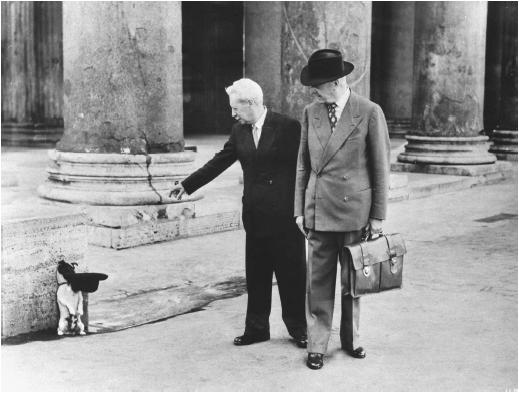 That’s a great film. Oh, so that’s how you got your screen name, huh.

Some people hate it though. Someone posted on the IMDB how it’s a bad film because the main character contributes nothing to society :loco:

“Rear Window” is one of my favorites too (although I didn’t like the “flash-bulb” gimmick). I also like “The Day the Earth Stood Still” and “Friendly Persuasion.”

Once I was channel-surfing late at night, thinking of going to bed, when suddenly I came upon this Japanese movie that was so well-filmed, I couldn’t take my eyes off of it. It was Kurusawa’s “Rashomon.” After that they showed “The Seven Samurai”–this turned out to be part of a Kurusawa marathon–so I didn’t sleep at all until the next day.

This is the era of Sanjit Ray’s “Apu” trilogy (except the last one came out in 1960), which are just as good. Somebody else mentioned “Pather Panchali” which is the first part.

In terms of musicals, I like “The Student Prince” and “Seven Brides for Seven Brothers.” Hardly in the same category as the above, but lots of fun.