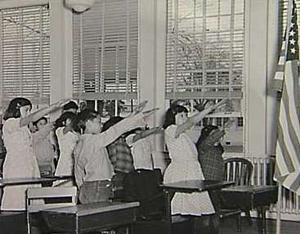 I must admit that my biggest surprise wasn’t hearing that the criminal gang in the White House had been spying on many millions of average citizens…it was that USA Today, a mainstream newspaper, had broken the story:

TruthDig calls it “The Gravest Assault on Privacy in U.S. History”:

My point is that I was surprised that USA Today published this.

You might want to use a pic that isn’t 50 years old.

Actually, I find that photo interesting. I didn’t realize the original official salute to the US flag was the same as the nazi salute.
rexcurry.net/pledge2.html

This also may be around 50 years old but I take a chance in submitting it. Speaking of salutes… Here Fidel shows Che just how much he cares…

or how about… Che saluting the Cuban flag?

or poor Cuban children being brainwashed into thinking Che is a hero?

Then there is always little Che learning perhaps to salute at an early age?

When he grew up, unfortunately, he learned to salute in different ways…

The End
By Fred

[quote=“fred smith”]This also may be around 50 years old but I take a chance in submitting it. Speaking of salutes… Here Fidel shows Che just how much he cares…[/quote]Jesus Fred, haven’t you got a new drum to beat yet? Still stuck on the OMG CHE WAS A CUNT thing? I know you’re better than that - I remember when you could get a rise without even trying. Now you really aren’t even trying.

I know you’re better than that -

If you do truly know that, then you know something that no one else does… I assure you I am NOT better than that.

I apologize and will sincerely reflect upon my shortcomings. I fully intend to do something about this.

One of my favorites…

The old “Duck & Cover” manuever. Those were the days…

They are not ‘average citizens’ nor innocent, they are ‘known Al-Qaeda affiliates’, totalling tens of millions (that’s at least 6% of the US population). Bush said so in his speech so it must be true:

"[color=red]We’re not mining or trolling through the personal lives of millions of innocent Americans. Our efforts are focused on links to al-Qaida and their known affiliates.[/color] So far we’ve been very successful in preventing another attack on our soil.

(Psst, I didn’t say he is lying if that’s what you are thinking.)

We’re not mining or trolling through the personal lives of millions of innocent Americans. Our efforts are focused on links to al-Qaida and their known affiliates.

Lynch and Healy show that Bush has failed in his most important responsibility “to preserve, protect, and defend” the Constitution and, thus, is in violation of his sworn oath of office. The two scholars document the Bush regime’s “ceaseless push for power, unchecked by either the courts or Congress” on issues ranging from war powers, habeas corpus, and federalism to free speech and unwarranted surveillance. Bush’s assault on the Constitution “should disturb people from across the political spectrum.”

Alas, it doesn’t. Many Americans believe that Bush’s dictatorial powers will only be applied to terrorists. This belief is extremely foolish, because it means that “the liberty of every American rests on nothing more than the grace of the White House.”

It has become commonplace to hear Americans dismiss the Bush regime’s illegal and unconstitutional exercise of power on the grounds that only those implicated in terrorism have anything to fear. These Americans need to ask themselves why, if only evildoers have anything to fear from government, the Founding Fathers bothered to write the Constitution?

Moreover, it is a far more dangerous and deadly assault than a terrorist assault on buildings.

It has been widely reported, apparently without causing Americans any unease, that the Bush regime has awarded Halliburton $385 million to build concentration camps in the United States. Who are to be the inmates? Certainly not terrorists. The Bush regime has proven inept at catching terrorists, and those few who are captured are kept offshore out of the reach of the courts where they can be tortured and abused. The camps are certainly not for illegal aliens who both political parties want to give amnesty and citizenship.

The Bush regime’s war on terror is the equivalent to the Nazi regime’s Reichstag fire. It serves to blind people to the real assault.

According to Bush, America is under terrorist attack because “they hate our freedoms.” But, as Lynch and Healy show, it is the Bush regime that is attacking our freedoms, removing their institutional protections, and making our liberties subject to the grace of the executive.

Links referenced within this article

Find this article at:
antiwar.com/roberts/?articleid=8994

If we’re so brainwashed then why do Americans spend so much time arguing these very topics through the papers and on websites such as this one, and why is Bush’s approval rating so low?

So the whole article rambles along but never once actually defends its basic premise which is that our constitutional rights are under attack by a dictatorial Bush. My two questions are Which ones? How? have fun trying to support your views on this.

We’re not mining or trolling through the personal lives of millions of innocent Americans.

They’re only trolling through the personal lives of the other 288 million innocent Americans! (The US population is 290 million, right? 2 million counts as “millions”, right?)

Our efforts are focused on links to al-Qaida and their known affiliates.

So the whole article rambles along but never once actually defends its basic premise which is that our constitutional rights are under attack by a dictatorial Bush. My two questions are Which ones? How? have fun trying to support your views on this.

They’re only trolling through the personal lives of the other 288 million innocent Americans! (The US population is 290 million, right? 2 million counts as “millions”, right?)

According to USA Today it’s tens of millions, so that makes at least 20 million:

The National Security Agency has been secretly collecting the phone call records of tens of millions of Americans, using data provided by AT&T, Verizon and BellSouth, people with direct knowledge of the arrangement told USA TODAY.

I can name a few:

It’s always worth a try…

Really? Are those being held in Guantanamo US citizens?

Well I have seen not much about spying without warrants. I have heard about checking phone records. This could be as simple as comparing calls received from and made to certain regions. Big deal.

A great to-do is being made of this. I predict that nothing will come of it.

There is no “right” to abortion. Check your US constitution.

Marriage is not a “constitutional” right. You can legislate to make it legal. This is how the road to legalized abortion should have been taken, through the legislatures not the Supreme Court. Feel free to pursue this but until those rights are granted, they cannot be infringed upon so … guess what you are back to square one.

Fine. I will come with a bullhorn and yell outside your window day, night, whenver I feel like it. You will naturally allow this since you do not want to take away my freedom right? There have always been such limits to “free speech” and that was not the intention of the framers of the freedom of speech clause in the Bill of rights.

where does it say that government cannot fund religious activities in the constitution. It said that there cannot be a “state” religion.

what’s your point here? I cannot determine what you are trying to argue.

Anyway, all a nice litany of the usual complaints from the mindless left but can you have someone from your “side” show how any of this is constitutionally illegal or illegal in general? This has worked itself through the courts so let us know if you find anything that everyone missed during the many decades that some of these cases have been around. I am sure that will earn you a coveted spot in the next Harvard Law School class. Congratulations!

[quote]I can name a few:

Really? Are those being held in Guantanamo US citizens?

AHA! THE GREAT FRED-BOT IS WRONG!!!

You don’t need to be a U.S. citizen to be eligible for habeas corpus.
As you say in the same thread,

Check your US constitution.