I like Tim Marshall’s books. He makes a lot of sense. Big Picture stuff. 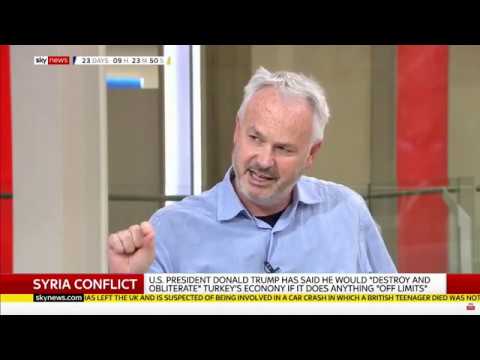 And this Friedman guy, whose books I read years ago: 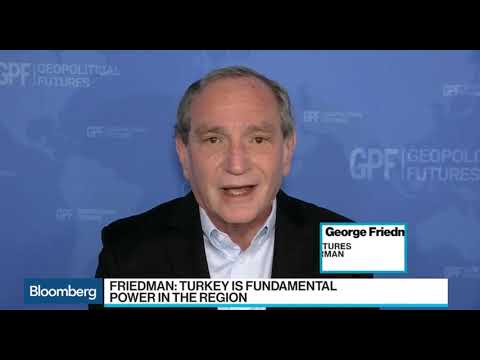 Ron Paul: Washington Is Wrong About The Kurds

It was a colossally dumb idea to train and arm the Kurds in Syria in the first place, but after spending billions backing what turned out to be al-Qaeda affiliates in Syria to overthrow the Assad government, Washington found that the Kurds were the only willing boots remaining on the ground. While their interest in fighting ISIS was limited, they were happy to use Washington’s muscle in pursuit of their long-term goal of carving out a part of Syria (and eventually Turkey) for themselves.

We can never leave because there will be a slaughter, Washington claimed (and the media faithfully repeated). But once again, the politicians, the mainstream media, and the Beltway “experts” have been proven wrong. They never understand that sending US troops into another country without the proper authority is not a stabilizing factor, but a de-stabilizing factor. I have argued that were the US to leave Syria (and the rest of the Middle East) the countries of the region would find a way to solve their own problems.

Now that the US is pulling back from northern Syria, that is just what is happening.

On Sunday the Kurds and the Syrian government signed an agreement, brokered by the Russians, to put aside their differences and join together to defend against Turkey’s incursion into Syrian territory.

Yeah, pretty much. Russia wants to keep Turkey in one piece, and having the Kurds south and north of their border join up will not do that. Welcome to the new new.

I’d agree except that even with western intervention Iran keeps getting more and more influential in the region. If the US pulls out it must also be willing to come to some sort of agreement with Iran or the US will be forced to intervene when inevitably oil supplies get disrupted.

Thing is, we don’t get much oil from Iran. China does, though.

So who would have eliminated ISIS in their strongholds in North Iraq then?
Remember that same ISIS that was slaughtering Americans as well as other Westerners . Using their base there to
hatch terrorist plots abroad. One plot that had successfully targeted a bunch of Americans you would be changing your tune quickly.

The Kurds treat their women with equality too.

And the Kurds are ending up back with the enemies of American interests, Russia, Iran, Syrian govt ! And where are these ISIS people going to end up …ISIS hasn’t gone away.
America is going to have very few friends left. Saudis…Please. Those idiots would be crushed in any way with Iran and they are well hated in the Middle East. Turkey. …Not your friend.

I’m not saying there are any easy options in that part of the world. But all I see are half assed attempts at back justifying what are essentially on the fly decisions from somebody who is badly informed.

So who would have eliminated ISIS in their strongholds in North Iraq then?
Remember that same ISIS that was slaughtering Americans as well as other Westerners . Using their base there to hatch terrorist plots abroad. One plot that had successfully targeted a bunch of Americans you would be changing your tune quickly.

You can support the Peshmerga in Northern Iraq without having to support to the Kurds in Syria (YPG/SDF). The YPG and PKK are politically aligned so it was a non-starter that Turkey was going to allow an independent Kurdish region to the south of them. The PKK would just use the region to continue to launch attacks in their 30+ year terror campaign to free the Kurds in Turkish Kurdistan

I’m not saying there are any easy options in that part of the world. But all I see are half assed attempts at back justifying what are essentially on the fly decisions from somebody who is badly informed.

A) The piece you quoted was the article, not my words. Just to be clear.

B) It depends of the time frame. Sometimes it takes a few decades to unfucktangle a place…Japan for instance. Iran IS one of the more stable governments in the region. They’re just assholes. Maybe the thought is, maybe they mellow the hell out when there is another friendly stable-ish country in the area.

Honestly, who knows. Is it a hail mary to get Russia, a superpower, involved? IDK.

They aren’t going away either. A body’s got to do something. Why not be useful?

That’s an interesting part, isn’t it. What seems to be happening is a reboot of the Turkish southern border. The old post-WWI map doesn’t work. I think the Palestinian ordeal shows that the last thing one might want to not do is create or facilitate the grouping of another well armed, well funded, very well trained Stateless People with axes to grind named The Kurds.

So they should be thrown under a bus , same as Taiwan, because ‘stateless’.
You know what , I think you are just making it up as you go along, same as Trump.
ISIS will exploit this. So will America’s enemies.
America’s allies need to know America has their back when push comes to shove. It sure doesn’t look like it. I don’t think the headline is appropriate by the way, ignore it.

Viewpoint: Syria could be beginning of end for Trump

Syria is a disaster of the president's own making and could cost him the election, says PJ Crowley.

Sadly when you study the groups , the difference is similar to the Udf and ira in your neck of the woods . This group has a very similar ideology to isil. The only differences I can see in the administration… eg caliphate / administered regions . The fault was in choosing between a dictator or a violent militia . No win . Blaming Trump is simplistic rhetoric imo

I think that Trump doesn’t have a plan beyond 'wirhdrawing troops ’ is pretty obvious. The US has a right to withdraw them but it has a lot of consequences for sure down the line. Especially if they are supposed to be suppressing ISIS activity.
Also all US allies now know that ‘wasnt an ally in WWII’ or any old justification can be used to abandon allies overnight.
I hope the Taiwan government is paying very close attention. Taiwan could be argued as ‘stateless’ and a Chinese problem if it fits into a bigger agenda for US and China. What’s most important now is to ramp up Taiwan US congressional engagement and internal defense capabilities.

Well actually , Turkey was going in anyway they said . Trump withdrew to save his troops , in part . Also , he can now hurt turkey where it counts with less risk of deaths . Assad would have defeated isis eventually , but at costs to our attempts to be civilized perhaps . Russia is in there trying to calm it down , Turkey should be under serious financial pressure soon , Iran …

but in the end I think the west should take a step back for a change and use more effective means . It’s not a bad idea …avoiding a huge conflict

I think that Trump doesn’t have a plan beyond 'wirhdrawing troops ’ is pretty obvious.

Sure, because that fits the narrative right. He’s WACKO!
Presidents sometimes ignore military chiefs and do their own thing. Maybe it takes a tougher hand to bring stability to the ME. Maybe Russia is more willing to flex muscles down south.

Whatever the West has been doing hasn’t really much worked has it? Something like 500,00 dead Syrians?

Also all US allies now know that ‘wasnt an ally in WWII’ or any old justification can be used to abandon allies overnight.

This is a worry?
Nonsense. I don’t think France is worried. Taiwan? Please. China has more to worry about in the SCsea with the PI allowing Russia to drill for oil.

It is difficult to accept that an era has passed into history. Those who were shaped by that era, cling, through a combination of alarm and nostalgia, to the things that reverberate through their minds. Some (though not Europeans) spoke of a betrayal of Europe, and others deeply regretted that the weapons they had worked so hard to perfect and the strategy and tactics that had emerged over decades would never be tried.

The same has happened in different ways in the Middle East. The almost 20-year deployment has forged patterns of behavior, expectations and obligations not only among individuals but more institutionally throughout the armed forces. But the mission has changed. For now, the Islamic State is vastly diminished, as is al-Qaida. The Sunni rising in Iraq has ended, and even the Syrian civil war is not what it once was. A war against Iran has not begun, may not happen at all, and would not resemble the wars that have been fought in the region hitherto.

This inevitably generates a strategic re-evaluation, which begins by accepting that the prior era is gone. It was wrenching to shift from World War II to the Cold War and from the Cold War to a world that many believed had transcended war, and then to discover that war was suspended and has now resumed. War and strategy pretend to be coolly disengaged, but they are passionate undertakings that don’t readily take to fundamental change. But after the 18 years of war, two things have become clear. The first is that the modest objective of disrupting terrorism has been achieved, and the second is that the ultimate goal of creating something approaching liberal democracies was never really possible.

For several years, there has been a significant shift underway in U.S. strategy toward the Middle East, where Washington has consistently sought to avoid

I think that the US doesn’t have a plan

FIFY. It fits better with the US actions in Syria. It doesn’t look like there was any long term planning involved beyond defeating ISIS and their Caliphate. We backed and supplied various groups with arms, sent troops into Syria, etc without ever asking what happens after ISIS was defeated?

Assad didn’t mind that we were taking on ISIS because it left him free to cleanse neighborhoods and drop his barrel bombs. Turkey also didn’t mind so long as the Kurds we armed didn’t think that they were actually going to get their own homeland.

Turkey was never going to accept a Kurdish region to their south when they have an estimated 20 million Kurds living primarily in southern and eastern Turkey. Unless we’re willing to kick them out of NATO they have more leverage than the Kurds do.

Just look at the below map of what a Kurdistan would look like. It takes territory from 4 separate countries to give the Kurds their own homeland.

If you want a Kurdish State (beyond the KRG), you either have a Kurdish war of independence (assuming Kurdish unity & with an enormous bodycount) or you have a Congress of Berlin style affair where *all* major players sit down & deal it into existence. There is no third option. https://t.co/QCnWWYXm8w

I found this informative.
https://youtu.be/EOcA3Jmb33k

Turkey was never going to accept a Kurdish region to their south when they have an estimated 20 million Kurds living primarily in southern and eastern Turkey.

Just because they can right . Because they were given the green light by that buffoon.
And now the Kurds and Syrian army are aligned to kick out the invaders.

All the Kurds? Or the “Syrian” Kurds?