i was wondering if people play GO in taiwan

oh i’ve never turned on my tv since coming here…

do you know where i can learn?
or buy a Go board?
or whats it called in chinese?
or if chess is played here in clubs? like informally…i’m not good enough to compete.

or whats it called in chinese?

I’m gonna use this old thread to talk abut Google’s Deepmind AlphaGo. AlphaGo is a Go playing computer that uses two deep learning neural networks, one that does policy decisions, and the other evaluate which move is more likely to yield a winning outcome.

AlphaGo has beaten the European Go champion Fan Hui 5-nil, with no handicap. It’s the first that any computer program has been able to defeat a professional human Go player without handicap.

AlphaGo won the first Match. Lee Sedol began the game rather unconventionally. Many professional go players like to use unorthodox moves to confuse computer programs. Lee might have tried to do the same. For that he got in a bit of trouble early on, as AlphaGo didn’t really fall for it. However as the game progressed Lee gained a significant lead, while AlphaGo made a couple amateurish mistakes.

As a result, AlphaGo took more time to think throughout the game, using up almost all of its 2 hours. However, the tide was turned near the end of the match, when AlphaGo went on an offensive streak, and Lee responded too conservatively. AlphaGo secured the area on the top left with the 116th move, while distracting Lee by taking a little corner on the top right. In the end Lee had more on the board, but since he chose to play first, he ended up losing after counting the 7.5 komi to AlphaGo. Lee was eventually forced to resign.

If Lee begins the game conventionally, he is still favored to win Game 2. Never the less, this win is still an incredible achievement in the field of neural-network machine learning.

It’s impressive to see how far we got on neural networks!

It’s impressive to see how far we got on neural networks!

The issue with neural network is that we are mimicking the organization of biological brain’s, when does it stop being just machines…

Not looking good for Li Sedol again… Li has used up all his regular time and is limited to 1 minute per hand. Every time Li tries to take out AlphaGo in a localized battle, AlphaGo manages to survive. The complex fight at the center, which was supposed to be Li strong suit and for a while looked that way, all just went down hill for him in late game. Even outside localized battles AlphaGo is still out-thinking Li.

It’s hard not to have mixed feelings watching one of the best human players in the most difficult human game ever constantly scratching his head and shifting in his seat like he’s constantly playing catch up.

By the way, AlphaGo seems to be trying to write the Hanji character for Death “死” on the board. Hope that’s not a message for all of us.

As I received in my inbox today: DeepMind’s co-founder explains, this breakthrough is just the beginning. The ultimate goal is to “solve intelligence.” (No word on how to solve for a lack of it.)

And here is a short list of game computers still can’t win. (Sadly, I don’t see “kill all the humans” on the list.

[quote=“Ricarte”]As I received in my inbox today: DeepMind’s co-founder explains, this breakthrough is just the beginning. The ultimate goal is to “solve intelligence.” (No word on how to solve for a lack of it.)

And here is a short list of game computers still can’t win. (Sadly, I don’t see “kill all the humans” on the list.

The issue is just copying biology isn’t “solving intelligence.” We can totally simulate the human brain today with hundreds of servers armed with the most advanced GPUs, all we need is enough money and resources (the electric bill will be enormous). We then have to spend years “teaching” that neural network, and “it” will literally be intelligent. Does that mean humans solved what it means to have intelligence?

In the future people will most likely spend time finding out what is the best way to “teach” future neural networks, so we can get the best results in the shortest amount of time. Real understanding of why mimicking synapses results in intelligence probably would remain a mystery to us for generations to come.

which is just a raspberry pi mounted on a RC car with sensors.

recreates the brain of a tiny worm called Caenorhabditis elegans in the Raspberry Pi’s memory. A C. elegans only has 302 neurons. The entire simulation is only about 5000 lines in python. Without actually writing the code to tell the bot how to react when it’s about to hit something, this GoPiGo with a simulated worm brain can avoid obstacles on its own and search for what people programmed it to think is food.

That’s great and all, but we have absolutely no idea how it works, we just know if we copy the worm’s neuron connections, it somehow instinctively knows how to move around…

But what should be the main goal? To develop a system that can replicate a human’s brain or to understand how does it work? Even though we are far from reaching the former, it is still easier than the latter…

I didn’t know about the GoPiGo project, but looks very interesting! I’ll check more on that.

Chinese top Go player Ke Jie, who famously defeated Li Sedol back in January, made a statement on March 9th saying “even if AlphaGo defeats Li Sedol, it still stands no chance taking a win from me.”

Well, Master Ke, of course AlphaGo can’t defeat you, because when the game is held in China, AlphaGo won’t be able to connect back to Google’s servers due to the Great Firewall of China.

Well, after another devastating defeat in Game 3, Lee Sedol finally defeated AlphaGo after it made a unrecoverable mistake in move 79. Lee was in trouble right off the bat, but when AlphaGo enclosed on Lee from all sides, Lee made an amazingly unexpected move on the 78th move. AlphaGo wasn’t able to respond to Lee’s move and Lee reserved the tide and forced AlphaGo to resign by move 180.

Demis Hassabis, the head of AlphaGo, tweeted that AlphaGo realized the 79th hand was a mistake by move 87, but by the it was too late to find a way to come back from it.

I get the feeling that AlphaGo was trying to write the Chinese character 笑 this time… It looked more like it before 7 of his pieces were picked away by Lee. Interestingly, one of those pieces was the 87th hand, when AlphaGo realized he made an mistake…

Quite interesting. Gonna watch these videos and try to learn how to play it.

Chinese top Go player Ke Jie, who famously defeated Li Sedol back in January, made a statement on March 9th saying “even if AlphaGo defeats Li Sedol, it still stands no chance taking a win from me.”

For got to mention, China’s top Go player Ke Jie, who dissed Li Sedol for losing, played his first game against AlphaGo today. He lost by 0.25 point.

Next game is Thursday. 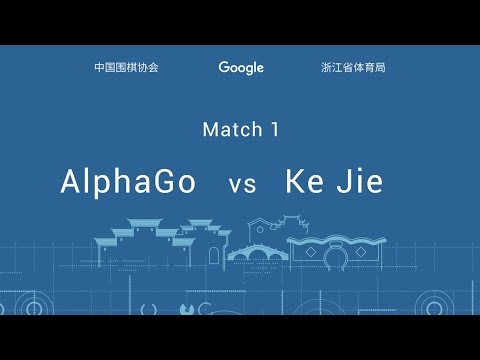 If anyone is interested, I noticed this place the other day. Maybe not the only one.

That was frigging amazing…

For the most part it Ke even seemed like he had an small advantage. Then AlphaGo drew a house on the board and Ke forfeited.

The most freaky thing is AlphaGo started the game the same way Ke did in their first match. That is just eerie. Spiting your opponent by using an opening that he just lost with, and then win anyway, is just such a human thing to do…