Gold winning swimmer tells 2nd place he is a loser

Chinese medalist confronts second swimmer who won’t stand next to him: ‘You’re...

Scott refused to be on the Podium with Sun Yang over doping allegations.

you have to read into story.
short version is the fuqqer ChiComn is about to have some verdict (guilty) handed to him very soon on a doping case, so others rightfully pisst off he’s allowed to swim.

Horton snubbed Sun, who served a 2014 doping ban, after the triple Olympic champion was allowed to compete ahead of the Cas hearing in September that may end the Chinese star’s career.

The 10-time world champion has been accused of smashing vials of his blood with a hammer during a clash last year with testers, and faces a lifetime ban if found guilty.

This is insane, he smashed his blood vials with a hammer??? And they let him compete?

Swimming Australia was confident Horton would escape sanction after refusing to shake hands with Sun and not joining his bitter rival on the podium on the titles’ opening night at Gwangju, South Korea, on Sunday.

you can google story…

That smug ass needs a good fist to the face. What a prick.

Why both? Given the circumstances, he had every right to not take a photo with him.

Part of me is like just shake his hand and be a good sport. But I also understand why he would be pissed and react this way. Especially when it’s a gold medal on the line.

Part of me is like just shake his hand and be a good sport. But I also understand why he would be pissed and react this way. Especially when it’s a gold medal on the line.

Yes, and at that level anger and aggression are prized as powerful motivators both.

I think it’s wack that he took a hammer to his blood sample - I don’t understand how that did not get him immediately booted from competition - but frankly I’ve heard way worse smack talk just playing poker. Certainly in the NFL and the NBA, even in MLB (although it seems to have waned there). Even in soccer. Not that big a deal imo.

I was thinking about it, I enjoy trash talking as part of the entertainment. But I think when representing your country, you don’t do it. It’s not in the spirit of the games in this aspect. Just my opinion.

Didn’t a similar drama play out with this doper during the 2016 Rio Olympics?

Didn’t a similar drama play out with this doper during the 2016 Rio Olympics?

It just seems to me, PEDs are extremely prevalent at this level. These are the ones who got caught too, it’s known it’s been easily to not get caught. For sports like swiming, PEDs help a lot. Being .1 second faster is a big difference with gold on the line.

I’ll be happy when PEDs aren’t the issue and it becomes one of genetically/cybernetically enhancemed VS naturally super freak.

Just give them free reign IMO.

Yes. I also look forward to the day that notorious super freak Rick James rises from the dead and becomes a world champion swimmer.

Well Sun Yang has been banned for 8 years by CAS.

That’s the end of his career. Good riddance.

Good, hope he retires to Wuhan. Hear it has lovely rivers for him to swim in.

Olympic champion Chad le Clos told CNN that he believed he “deserved” the gold medal he was denied after finishing second behind Sun in the 200m freestyle in 2016.

“It’s obviously not for me to judge but of course, I believe that I deserve that gold medal because back in 2016, it was actually a personal best and actually a South African record,” Le Clos told CNN Sport’s Amanda Davies.

"I feel like it’s not only about me. It’s about James Guy who finished fourth in that race, whoever came ninth and whoever came 17th missed out on Olympic finals and semifinals. It’s a snowball effect.

"At the end of the day, you’re killing generations of swimmers by not punishing these drug cheats because for example, if Guy had got bronze and on the podium, it could have changed his life.

“If I hadn’t had got gold in London and I had gone into Rio as my first race, and I had got a gold medal, it would have changed my life. It’s not just me but they should go and have a look at some of the stuff that’s happened.” 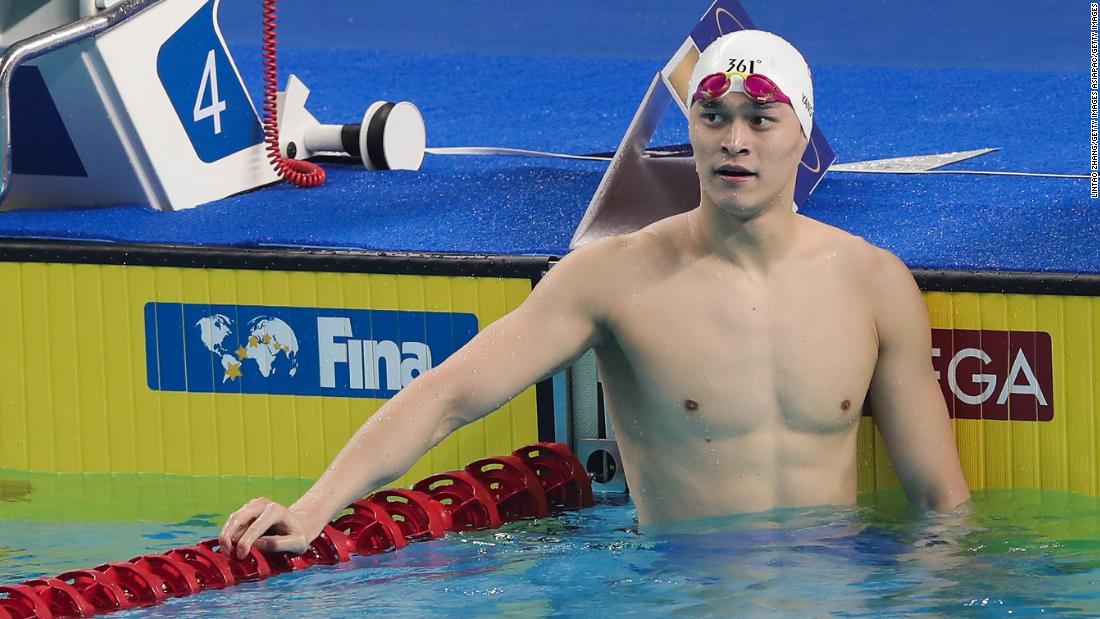 Triple Olympic swimming champion Sun Yang has been banned from the sport for eight years for missing an out-of-competition doping test, the Court of Arbitration for Sport (CAS) said on Friday.