Good news for the day

Man, if this story doesn’t make you smile, nothing will. 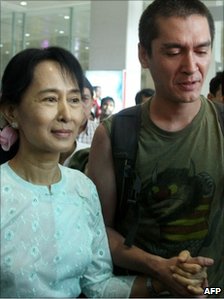 The younger son of Burma’s pro-democracy leader Aung San Suu Kyi has met his mother for the first time in a decade.

Mr Aris had travelled to Thailand before his mother was freed on 13 November and waited to be granted a visa to Burma. . .[/quote]
bbc.co.uk/news/world-asia-pacific-11817685

But we all know that. That’s how it’s been and it’s not going to change.

Still, it’s great to see The Lady in such high spirits over such a wonderful event.

Or how about this one? Here’s a pleasant and unusual twist on the tired, old, loner in black trenchcoat goes on a school shooting rampage story.

A student armed with a handgun held 23 other students and a teacher hostage for several hours on Monday at a high school in Marinette, Wis., which borders the Upper Peninsula of Michigan, the authorities said.

When’s the last time NO students were killed in such a situation? Apparently the suspect may have shot himself and his condition is unknown, which is too bad, but hats off to the negotiating team (and to the crazy guy for not shooting them all). :bravo:

I learned in the past year that a major asshole with whom I once had to do business – the General Counsel of a large Taiwan tech company – a guy who was consistently rude, arrogant, dishonest, deceitful and obnoxious in our dealings with him, was prosecuted for insider trading. Oh, so sad.

Well, today I learned he was found guilty and sentenced to 3.5 years. Ha ha ha. Let that be a lesson to him. :discodance:

Now I just need to find his address so I can send my condolences.