Using a heat pump, solar energy, air and ice to heat and cool a house 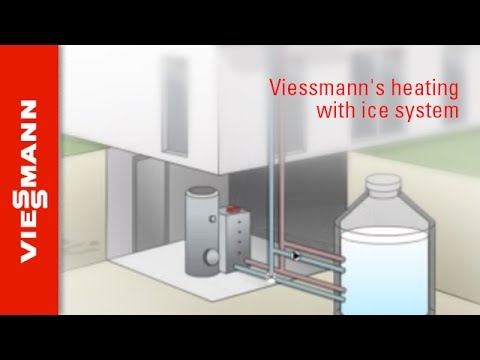 It’s not a new idea. The concept of storing “coolth” instead of heat has been floating around for a while (the trick here is that the heat of fusion of water is an extraordinary 334J/g). The Persians were doing it 1000 years ago. Pages for logged out editors learn more A yakhchāl (Persian: یخچال "ice pit"; yakh meaning "ice" and chāl meaning "pit") is an ancient type of ice house that functions as an evaporative cooler. The structure had a domed shape above ground and a subterranean storage space. It was often used to store ice, but sometimes was used to store food as well. The subterranean space coupled with the thick heat-resistant construction material insulated the storage space year round. These structures ...

Just not as advanced.

Somewhat more recently - prior to widespread electrification with high-current conductors - US air conditioning was based on the delivery of blocks of ice. It’s the origin of the term “ton” as a measure for aircon capacity. In this case, of course, the heat pump was in a big building somewhere instead of in somebody’s home.

Perhaps “refined”. old tech, that has been improved. it is amazing how long this tech has been around and we still waste as much as we do. That’s the astonishing aspect for me

US air conditioning was based on the delivery of blocks of ice.

Also refrigeration. It was a major industry. I always used to wonder why marshland in my region showed clear signs of human activity like this Clearly there was some kind of historical agricultural or fishing activity (there certainly isn’t now). Actually it was that the salt grass was harvested as a vital material for ice storage. The land was quite valuable at the time.

In the old days they would harvest ice from frozen lakes and stuff. They would store it in large buildings where it stays frozen for months at a time, where in the summer rich people can have ice delivered to them. I believe some major companies were founded on this business model.

Just not as advanced.

It says in the article that there are examples still standing after hundreds of years in Iran.

I agree. If I had the finances (and knew of anyone doing construction of it), I would build a house with a solar chimney and 1/2 meter-thick (ideally cork) insulation. Massive heat wave destroys the power grid? No worries, you can pull the heat out of the house. Insane winter storm knocks out power? No problem, even if there’s no sun to heat the chimney, the insulation will keep the temperature indoors perfectly livable. Russia drops bombs on the power grid? Again, no problem.

But really, ice in the dessert in the height of summer over a thousand years ago?! What was the human race in the West doing in the few decades before refrigeration was invented?

There’s a guy somewhere in the US - I completely forget who and where he is - who uses a similar sort of principle to grow subtropical plants. He lives in a region where it gets pretty cold in winter but very hot in summer. A couple of meters down, the soil temperature is basically the annual average. So he just dug a huge pit in the ground, put some polycarbonate over the top, and he now grows tomatoes in winter, bananas year round, and all sorts of other daft stuff. I’m sure more people will start rediscovering some basic physical principles when the pain of high oil prices starts to bite.

What was the human race in the West doing in the few decades before refrigeration was invented?

Absolutely fascinating discussion. Quite astonishing how animals have managed to adapt.

I am too far into CNY to be coherent but want to add this before I forget.
<<<… In the Netherlands they started floating greenhouses. Huge greenhouses floating on a water reservoir. Using the water for irrigation and recycle it.

Can’t remember who it was - the Chinese? - but that’s an old idea too. Floating rafts of vegetation with roots in the water. Basically prehistoric hydroponics.

The Aztecs did something similar, some survive to this day Pages for logged out editors learn more Chinampa (Nahuatl languages: chināmitl [tʃiˈnaːmitɬ]) is a technique used in Mesoamerican agriculture which relies on small, rectangular areas of fertile arable land to grow crops on the shallow lake beds in the Valley of Mexico. They are built up on wetlands of a lake or freshwater swamp for agricultural purposes, and their proportions ensure optimal moisture retention. The United Nations designated it a Globally Important Agricultural Heritage S...

That’s the bunny. My memory was doing a coinflip between the Chinese and the Aztecs.

Am I confusing things as well or didn’t the old empires in and around cambodia do something similar with aquaculture to the americas?

I suspect most cultures with seasonal flooding would have developed similar technology. As the patent office would put it, it’s one of those things that’s “obvious to those skilled in the art”.

As they did building pyramids, it’s the most stable form of construction. Nothing to do with extraterrestrials.