How do the games and claw machines at the night markets work?

I visited earlier this year. How do all the night market games work? One looked like pinball/pachinko, there was some mahjong tile game and a goldfish catching one? Don’t know if the goldfish one was a game or if it was just for kids to catch a goldfish to keep.

It was interesting seeing people of all ages playing the pinball/pachinko game.

there was some mahjong tile game

The game that uses mahjong tiles isn’t mahjong at all, but bingo. After you pay you can choose a certain number of tiles, usually around 13, then you just turn them over and match them to the board. A bingo gets a prize. You usually pay 100nt for maybe 5 tries.

I slowly turn over each tile, cheering myself on when I get a good draw, and acting sad when I don’t. Purely for dramatic fun.

If you end up with 聽 (“ting” - need only 1 more tile for a bingo) the proprietor will often give you a couple more tiles to keep trying. However, if you bingo on the extra tiles you won’t get a big prize but maybe a free chance to play again or something.

The good proprietors will turn over the unused tiles at the end of the round to show you that the game is fair.

And now you can join in the fun!

I remember my wife and I playing that game. We won a number of times and the game owner kicked us out and wouldn’t let us play anymore. I think we won about five or six times in a row.

Careful you don’t get blacklisted from all night markets.

What I don’t understand are all those claw machine game stores opening up all over the place in the most unusual places.

It is weird. And I never see any kids in there. 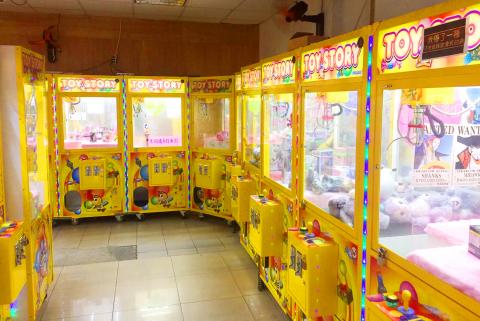 Taoyuan City Councilor Liu Mao-chun (劉茂群) on Friday claimed to speak for local parents at a municipal session, saying they were concerned about the rising number of toy claw crane machines around schools, where children were “spending their breakfast...

his wife had spent NT$6,000, half the family’s monthly allotment for food purchases, on the machines within a few days

Most of the crap in those machines can be had for a hundred NT at any cheap toy store.

I don’t get the claw machine craze either.
Over in Taichung they are pretty popular, and a lot of locals tell me that they often drop a lot of money to play. Apparently there are tricks to make it easier to get the prize

I was told that these make a minimum of 30,000ntd/month

For the claw machines, is it a craze, or more the fact that nothing else is willing to pay any rent and that the retail sector is dying? The claw machine places certainly never seem all that busy.

Copycatting Japan possibly. They seem fairly popular over there.

I saw a claw machine place in Xiao Nan Men MRT station today of all places!

But when you think about it the machines are probably cheap, they fill them with a couple of thousand of tat at most and then they wait for the addicts .Maybe they only need a few gaming addicts a day

Each machine is serviced by different individuals and they rent the space in the shops. They don’t pay tax either of course.

Still the massive Proliferation does have me somewhat confused.

We had a fantastic Italian restaurant near us (quite the find in Taiwan), but it closed due to lack of trade and high rent. The owner told us the rent was 73k a month. It’s now a claw grabbing thing place. HTF do they make profit on rent like that?

Probably the machines go in when there’s a gap in tenants too.

Probably the machines go in when there’s a gap in tenants too.

That’s probably it. Whack in some machines as a stop-gap.

I hate those machines. They are a cancer overtaking my neighbourhood one empty space at a time. Just ban the ugly things already, uber got banned but these things are ok? Uber got banned but full building window covering ugly ass advertising is ok?? Depressing.

They are popping up like mushrooms here in Hualien.

Saw one in Santa Cruz, CA where the interior was human-scale. Unfortunately no humans inside.

They are depressing. Something soulless about them. They’re never busy or full of kids having fun.

Almost as bad as seeing the middle aged and old folks standing around in the middle of the day on a random street corner playing Pokemon but not talking to each other.

I forgot about the claw machines! So many stores and I hardly saw people in them. My friend also told me about those vending machines with mystery prizes started popping up recently.

Based on the above comments and my own observations, I tend to agree with SuiGeneris about those claw machines:

Really, in every town and city.
Probably a portion are but it seems to be a real phenomenon. They are operated by local individuals in many cases.

I’ve seen quite a few claw machine places being staffed and run by individuals who appear not to be geared towards children’s entertainment, rather Taiwanese mafioso type. Just an observation. Who knows, maybe this is just an urban legend for Taiwan and its all innocent stop gap real estate strategy.

But I really am curious how money laundering would work with claw machines. Any ideas? Maybe its not money laundering, but some other illegal operation like a front of some sort.

By the way, that would make for a very interesting thread…Taiwan Urban Legends. Someone get on it!