How do the games and claw machines at the night markets work?

They are really popular in Tainan as well!

But I really am curious how money laundering would work with claw machines. Any ideas?

The owner just user it to justify dirty money as being from X number of customers, when in fact it comes from illegal activities. I can imagine a 大哥 getting money for “protection” from the night market vendors and using a store full of these machines to justify such gains…

A restaurant just closed down in luodong and now in its place is a giant room of these machines. WTF

So they just politely ask night market players to go and put some ( a lot of) coins in the machines? That’s a brilliant idea and makes sense.

According to the source below:

But I really am curious how money laundering would work with claw machines. Any ideas?

A beautiful night market stall you have there. Would be a shame if something happened to it. I know your livelihood depends on it. For only a couple of thousand NT per month, I will make sure it stays just as nice as it is now.

Since I am very industrious and have a big heart, I will take care of others as well. Now what do I do with all that cash on my hands? If I, my family and my 小三 live off it and I show no income when tax season comes, that would look suspicious, wouldn’t it?

So let’s open a cash based business. And even better, one with very few employees! Those greedy little bastards.

So let’s say I collect my protection money from you. I go to my shop and account for it as income. So many players, my place is really popular, you know! I go and put that cash into my business bank account. The bank is happy, I am happy. 幸福！

But look at all these expenses I have. Running a business is hard. My business needs a car, because I travel so much. And we have a fleet of scooters as well. They all need to be filled up with gas and maintained. And I employ my family too, to check on things and whatnot. But I pay them very little, otherwise income tax and NHI is too high. And I eat out a lot with my business partners. You know, connecting with your peers is really important in this industry.
So many expenses, I am telling you!

Doing this kind of business is really hard. But my business will proudly show a small profit of 10000 NTD at the end of the year. And of course it will pay profit tax! Because I am a smart, law abiding citizen.

Edit: Actually the first 120000 ntd of profit are tax exempt. The more you know…

When playing these things, is one supposed to keep the button pressed until it returns to the chute? I recently tried my hand at this and the claw picked up the tiny stuffed animal no problem but as soon as it went back up it opened the claw and released the prize back onto the pile.
I thought either the machine was rigged to cheat or I was supposed to keep the button pressed.

The machines are rigged, they’ll happily tell you that, it’s gambling not skill.

When playing these things, is one supposed to keep the button pressed until it returns to the chute? I recently tried my hand at this and the claw picked up the tiny stuffed animal no problem but as soon as it went back up it opened the claw and released the prize back onto the pile.
I thought either the machine was rigged to cheat or I was supposed to keep the button pressed.

They are programmed to release when they go up. However, notice the stickers on the outside, they tell you what the payout will cost after so many tries. ie: $150 guarantees a win. So on a $10 machine, after 15 fails, you will get a claw that won’t release when it goes up.

These claw machine shops are shit, it is like a magnet for trashy/gangster people to hang out in your neighborhood.

I thought the value on the sticker meant that if you spend that amount, ($150 in your example) they would just give you the prize…

I thought the value on the sticker meant that if you spend that amount, ($150 in your example) they would just give you the prize…

Depends on the place I guess.
But the ones I have played keep the claw closed after you have payed the posted amount.

I’ve seen a lot of people using different tricks to take advantage of the auto-release, like swinging the claw around before picking up the stuffed animal, hoping it’ll fling the toy into the chute. Lots of analysis as to which animal to grab as well as the strength of the claw, if it leans to one side, etc. Not worth it to me though.

Machines that guarantee a prize after a customer pays a set price — provided that the price matches the value of the prize — are considered merchandisers, while those that do not are arcade machines, Wang said, citing the interpretation."

Claw machine proprietors who offer prizes that are not properly labeled are to be held accountable, the Ministry of Economic Affairs said on Tuesday. The number of stores equipped with claw machines has increased dramatically this year to 3,353, from...

Swinging the claw works on some machines. I learned this technique from a guy I watched at one of those highway stops. He had 5 stuffed toys. I asked him why he was swinging the claw around and he explained the technique to me. So the next time I tried it and I got 2 stuffed toys. The timing has to be right and if there is too much lag after pressing the button, it won’t work. At least that has been my experience.

I know I know, it’s a FB link. But I was just happened to see this posted on my feed. I was trying to get a visual of the shaking technique you guys were talking about and this popped up.

Based on the above comments and my own observations, I tend to agree with SuiGeneris about those claw machines:

No, that’s the laundry machines

Tunghua night market has 12 claw machine shops on the one short street. They are taking over. Changing the feeling of the night market. Not as many interesting shops as before but a lot of claw machines.

It’s a gambling ring, you grab a toy and go to another place to exchange for money! 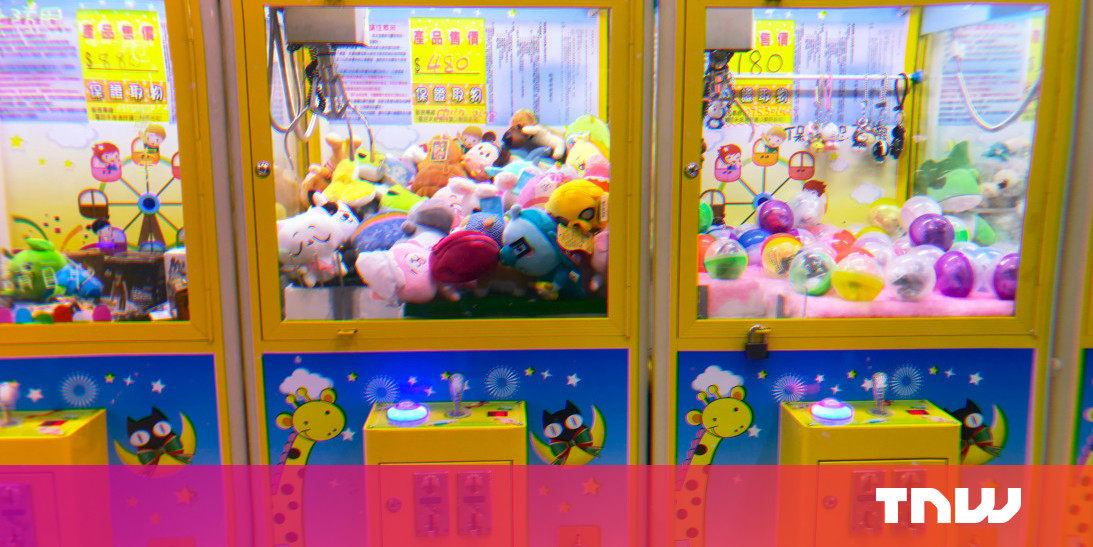 Taiwan is obsessed with claw machines (and so am I)

Taipei is game-crazy. From pinball machines to toy dispensers, the gray city blocks are sprinkled with the neon glow of mini arcades, with enticing names such as “Happy Moments” and “Sweet Box” (😬). But no game is more common than the claw

Claw machine stores are gaining popularity across the nation, with many saying that it is an easy way to earn extra money on the side. According to a man identified only as Stanley, the business model is simple, and claw machine store owners can...