So far, so good- Sunni insurgents apparently getting the word to Zarqawi’s boys to keep their head down or get it handed to them, which is good news.

Best hope for results- United Iraqi Alliance (Shi’ite religious parties) lose enough to become a minority- guesses that I saw were about 40%- forcing them to compromise and rein in al-Hakim and the Badr Brigades.Taking away the Interior Ministry would be a good start.

40% looks low considering that they represent 60% of the muslims (95% of the population). But I’m not aware of the election mechanism… so it can be a realistic estimate.
On a longer term, I wonder how to avoid the rise of islamist parties in the future elections.

PAST the broken minarets and US Humvees squatting like armadillos in the dust, the people of Fallujah walked to the polling stations yesterday for what [b]their Mayor described as a

Absolutely… how stupid of Bush to believe that the Iraqis would be interested in democracy!

Current word is that, so far, 67% of those registered have voted. Poll hours have been extended.

[quote=“Tigerman”]
Absolutely… how stupid of Bush to believe that the Iraqis would be interested in democracy![/quote]

The high turnout doesn’t come as a surprise to me, considering that the insurgency has been losing ground. Iraqi people are offered turnkey democracy by the US taxpayers. They would be stupid not to try, even if it’s just in order to see US troops leave earlier.
It’s the sustainability I wonder about. The instability in the country and in the region, the local religion, culture, corruption and history are all factors putting it at risk, it seems.
They won one game, but there’s a long road to the superbowl. Well, congratulations anyway.

[quote=“twocs”][url=http://tw.forumosa.com/t/why-did-bush-invade-iraq/13003/34 I picked out this one because in my mind it is the weakest of your plan to change the world. It does not seem not solidly based in reality.

As these are Muslims we are talking about, they hold three books to be holy from Allah. One of the three books is the doctrine of religious law. They have lived as Muslims because of religious orders from God. 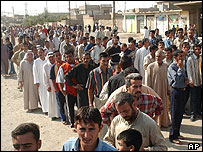 [quote=“Richardm”][url=http://tw.forumosa.com/t/why-did-bush-invade-iraq/13003/41 Making the world safe for democracy. Where have I heard that before? Hell no! We won’t go! Anybody up for an Alice’s Restaurant Anti-Massacree movement ?[/url][/quote]

[quote=“Rascal”][url=http://tw.forumosa.com/t/whither-iraq/5340/87 But let me ask you something: How does “encouraging” democracy around the globe equate to actually establish democracy? By invading other countries and forcing your view on them? - A rather risky and never proven attempt I think. [/url][/quote]

A fair bit of “gotcha” there, but why not?

*edit: I should add, that reading those quotations in context, there’s less “gotcha” then there is when reading them in your post, but a wonderful rhetorical piece nonetheless.

I still maintain that democracy can’t be imposed by warfare. Well, in the short-term, I suppose it’s possible. Warfare can, however, clear impediments to democracy. Whether or not it works, is an entirely different story. Having so many people turn out to vote is a wonderful sign.

I sincerely hope that they get what they’re voting for–(the Algerians and Iranians didn’t, and look how badly things went there. Now Egyptians and Palastinians aren’t.)–it is, afterall, their country. What they want may not be what the West would prefer. That’ll be the second test of this newly democratic state, and the administration’s commitment to the newest version of a “national self-determination” policy for others.

Today, however, it looks like they’re passing the first test with flying colours. Tough enough to get people out to vote in Canada, and there’s no threat of being gunned down or blown apart back home. Today, these folks put we more settled folk to shame. Good for them.

it is, afterall, their country

So now they can break it or better it.

[quote]it is, afterall, their country

So now they can break it or better it.
[/quote]

Well, it’s not quite there’s yet. I mean, with an 800 lbs, fully-armed foreign gorilla sitting in the big chair in the living room, it’s hard to do whatever you’d like… even if the gorilla is keeping the jackels at bay. Whether it really is their country, or not, is the second test, I figure.

A fair bit of “gotcha” there, but why not?

*edit: I should add, that reading those quotations in context, there’s less “gotcha” then there is when reading them in your post, but a wonderful rhetorical piece nonetheless.
[/quote]

Wasn’t posted with the intention of makng “gotcha” points. Had I simply wanted to make “gotcha” rhetorical points, I would not have linked the statements to their original contexts.

The reason I posted those statements and those photographs was to show how much has in fact been achieved… sometimes it is necessary to look back at general overall sentiments from the past to understand how far we (or, the Iraqis, in this case) have come.

[quote]BAGHDAD, Iraq -
Iraq’s electoral commission ruled Monday that more than 99 percent of the ballots from the Dec. 15 parliamentary elections are valid, opening the way for a new government to start coming together.
ADVERTISEMENT

Final election results have been delayed by fraud complaints mainly lodged by the Sunni Arab minority, and groups looking for a political edge in dealing with the Shiite Muslim majority could still make further protests and hold up the naming of new leaders for two or three months[/quote]

Like this wasn’t predictable. Just wait till you knuckleheads invade Iran:

. . . The election outcome signals a dramatic failure in the administration’s strategy for Middle East peace, according to analysts and some U.S. officials. . . . Elections in Iran, Iraq, Egypt and now the Palestinian territories have resulted in the defeat of secular and moderate parties and the rise of Islamic parties hostile to U.S. interests."
– Washington Post