Is "begpacking" legal? (not general discussion)

They are not doing anything interesting for the money they ask for. I want to see theatrics, art, poetry, ballads worthy of medieval troubadours, mimes, etc. Where is the next Marcel Marceau? Serge Gainsbourg? Armand Vaillancourt?

No show = no change. Their grammar is even wrong! What post-colonial studies undergrad program did these half-wits drop out from?

Must be illegal but police don’t want to create an incident. Surely someone has complained? All it takes is a phone call.

One time OK, but for a month?! Call the police!

I guess the question is “Is it illegal as a tourist to beg in Taiwan”?

I wonder why more people don’t complain about missionary visas.

It’s definitely legal to petition as a tourist, but as for begging on the street, I don’t know.

Still don’t know if this is working performance art or begging. Both are illegal without a permit aren’t they?

If somebody enforces it, yes.

so far taiwanese didn’t agree with me on my feelings on this subject. they thought i was being far too harsh on these poor little westerners. would they feel the same way if it was Filipino beggars?

I wonder if they’ve been organized

and i see no reason why taiwanese should be more sympathetic to option B). they literally think its cute or something. and yea if the same applys, a fillipino doing option B) would still be a different story.

A post was merged into an existing topic: Debate of the Millennium

What do the signs say under the woman with the blindfold?

More pics above with words.

Is her sign in traditional or simplified characters.? The “ma”? Isnt that weird here? Genuinely curious

Simplified. Maybe weird, but everyone will understand it.

It’s obvious she didn’t do her cultural research before coming here. Just like companies not caring about spelling in Canada.

This guy isn’t even offering hugs: the selfish prick just focuses on his phone while people give him money. 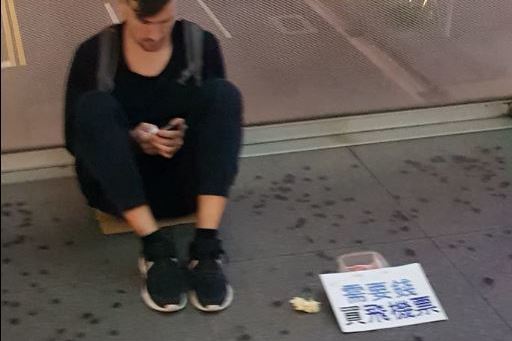