Ok, so some, if not most of you have heard of the pop star Jolin.

Apparently she was an English major, and decided to write a book in English, to help improve the English of her fans.

Her statement was so gut-bustingly funny that I was sure that it was some kind of joke. But it wasn’t. These are her exact words, straight from her website.

hello my love ones !! the weather is so sucks these days…are you guys taking great care of yourselves? hope you guys are…princess is doing the newsest album everyday now as you know… well, princess gonna rock you guys definately… hope you do look forward to it as i do. and of course, my English book J1 is coming out after days… if you would love to learn something special, just go shop it!! princess will be very very happy, especially when you guys’ english do improve after reading it!!by the way, your princess does want to thank you all for the warming messages, and all the encourgement on the board… your love will keep me going on stronger and stronger… tat’s no doubt!!you guys are so brilliant, just keep it for me…ha : )princess J

Wow. She must have studied hard in school.

Hopefully neither the book nor the website was really written by Jolin.

It seems to be her official site. The other entries are also in english and are all equally horrendous.

Her English was the subject of a “news” story today too. She got her ass kicked on national TV, even if she wasn’t actually there. They showed some clips from a TV thing I’ve seen before, her trying to teach some English, and man were the English translations of the stuff she was teaching horrible. The funny thing is, I’ve heard her speaking English before, conversationally, on the radio, and she was nowhere near that bad. She was actually pretty bloody good.

And that doesn’t look like her official site either. Had a look around - it’s some kind of “Fans club” site. So it’s possible it’s not her writing that, but it wouldn’t surprise me if it was.

Her official site is http://www.sonymusic.com.tw/pop/jolin/index_01.php.

That fan site with the bad English is listed as one of the official fan sites. I have heard that most pop stars do not write their own online journals, although some like Dave Navarro do.

If Jolin is graduating with a BA in English, her English from that degree alone will not be so hot. It takes a lot of reading outside of class to get English to a high level. The average English test score from people leaving university in Taiwan is quite low, so there’s statistical proof to back up what I am saying. Until the person takes the test, they don’t realize where they stand. Jolin is apparently translating a kids’ book for Madonna, but unless she learned her English from somewhere other than Fu Jen University’s BA program, she must be having some other people help her with the translation, and she just puts her name on it.

Since I’ve noticed nothing about time spent in an English speaking country on Jolin’s Wikipedia entry I’d rather buy books by HK pop star Coco Lee if I want to learn English. Taiwanese pop star eVonne was born in America, and I saw both Taiwanese soft-core rapper Pang Wei Buo and eVonne on MTV for a few months awhile back teaching English.

Jolin has an incredibly powerful name, and any project she can lend her name to will benefit. She’s the official spokesperson for Pepsi, McDonalds, Always Black Cosmetics, JoyBee Scooters, BenQ phones, IBS Jeans, KANGBAO CUP-A-SOUP!!! and many other products. With a star of that stature, her life is not her own - her agent gets her all the work and she does it.

A far as written English by a non-native speaker goes, I think that’s actually pretty good. Not bad for a BA grad anyway.

Referring to herself int he third person as ‘princess’ is a bit worrying though.

As I recall she spent a couple of years in the US studying a few years back. And like I said, I’ve heard her speaking English on the radio before, and she was pretty good at it. Minimal accent, very few grammatical errors, etc. Not like that thing above. Although then again, writing and speaking are two very different things.

her ad. on tv recently did sound quite good but i wouldnt comment on it, i’m not a native englsih speaker myself…

A far as written English by a non-native speaker goes, I think that’s actually pretty good. Not bad for a BA grad anyway.

Not bad? The 10 year old kids in my bushiban could write better than that. Really.

My student, who as a huge Jay Chou fan is jealous of Jolin (they had a romance apparently), told me that at the book launch Jolin was asked to translate something into English and the translation was gobbledegook.

Before she was a B 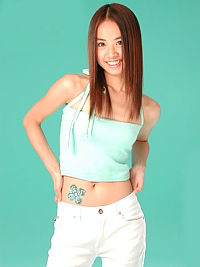 Now she apparently fills a J Cup bra. I can’t even say for certain if that pic is the most recent size.

If anyone has any pics of Jolin that are on topic regarding Jolin and her English proficiency, feel free to post them in this thread.

I volunteer to have language exchange with Jolin. I think she’s cute and I hope I can help her.
I heard tha A-Mei, whose English name is Sherry, has gone to Boston for six months of English study. Lucky Boston.

twocs: I feel I would understand her English problem much better if that second picture worked.

[quote=“Richardm”]I volunteer to have language exchange with Jolin. I think she’s cute and I hope I can help her.
I heard tha A-Mei, whose English name is Sherry, has gone to Boston for six months of English study. Lucky Boston.[/quote]

Wait a dog gone minute here. You said that you are a crappy teacher, and now you want to teach Jolin. What do you really want?

Heck, I’d take a “language exchange” with Jolin, but my wife would kill me.

There are not a lot of recent pics available to an English search. I put a better link to the pic above. Surely someone can search using her chinese name. I typed Tsai Jolin and found a lot of pics, but they are mostly her first pics from before the boob jobs. I know Next Magazine (convenience store counter magazine) had a nice before and after on the cover a few months back.

Jolin is apparently translating a kids’ book for Madonna…

Oh dear bloody God…not “The English Roses”. The steamiest pile of b.s. ever to pass as a children’s book. I think if it were written in bad English it could only improve the writing seeing as it lacks substance and treats children as if they were mindless idiots who cannot see through such a transparent plot (or lack thereof). I’m sorry, but even under the barest requirements, Madonna’s book does not qualify as a children’s book. It serves a better purpose being a well-decorated stack of toilet paper.

Ok, I got a pic from TVBS. It’s not so easy to see her new J cup size with the white jacket on a white background. But it’s actually a picture that’s getting back on topic - Jolin and her English.

As you can see, Jolin aka J-one is teaching some English Popular.

She is getting weak in her knees. She is pointing out that she must have me! Her last lover, Jay Chou, was lousy and annoying. Jolin thought she was just being a picky person. But it’s not a bluff, it’s love she’s in with me.

Here’s a picture of Jolin when she was in high school.

And if you’re interested in any of her music videos, they are available on MTV or at Jolin MV