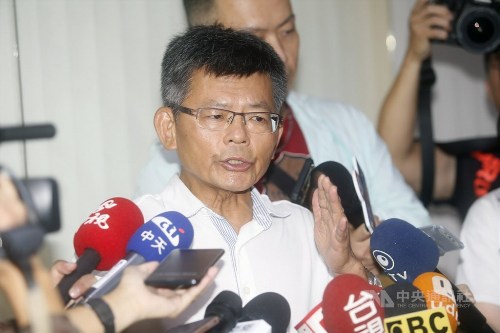 Remember this guy? This is former Democratic Progressive Party Kaohsiung County Magistrate Yang Chiu Hsing. This guy threw a fit when he lost the nomination to be a candidate for the new amalmagated ‘city’ of Kaohsiung. In 2010, after losing the nomination to Chen Chu, then Old Kaohsiung City incumbent mayor resigned and ran against her as an independent, lost, then joined the KMT, ran against her in 2014 as the KMT candidate, lost again and was kicked out yesterday for not supporting Han Kuo Yu.

I don’t know how people on the street view this guy. In my opinion, he certainly can’t have very many strong political positions. I wonder, were all his years with the DPP because he believes in the ideology or because that was the only chance of holding the title as mayor/magistrate? The DPP believes in independence, did he toss all that when he joined the KMT knowing full well that they support unification? Is this just all spite? I can’t imagine the DPP would be very welcoming of him crawling back. What does he actually believe? Does he have any guns to stick to?

Who knows. I really wanna know what this guy actually believes…if he believes in anything at all.

I’ve never been a fan of Yang (to say the least), but his parting words quoted in the article linked above are pretty hilarious:

Yang said he would also like to apologize to the people of Kaohsiung, adding that he did not know Han would be such a “slacker.”

Well just look at Lee Deng-hui. Went from being president and head of the KMT to standing up and denouncing the KMT as a foreign occupation force. Taiwanese politics is nothing if not pragmatic.