Looks like our kind, sweethearted, wouldn’t hurt a fly, Gentle George has dropped the MMA training for some good old fashioned boxing.

Also, looks like he is inviting people to take him on…

I don’t get it though, thought he was a poor helpless, defenless sap who just wanted to make his neighbourhood a better place? The guns, the multiple combat sports, seems a bit out of character no?

As for George’s cut from the fight, we’re told he’s donating the money to charity.

Yeah, what a jerk.

What a terrible human being. 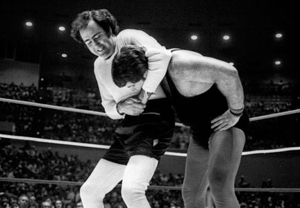