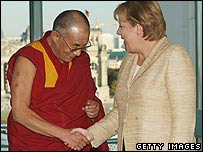 Mrs Merkel had been advised against the meeting, reports say

China had criticised the meeting and, shortly beforehand, cancelled talks with the German justice minister.

Germany said the meeting with the Dalai Lama, who fled Tibet in 1959 after a failed uprising, was a private event.

But China, which governs Tibet, says the meeting was part of the Dalai Lama’s agenda for Tibetan independence.(more at link)
news.bbc.co.uk/2/hi/europe/7008931.stm[/quote]

Will she receive total consciousness on her deathbed?

Luckily Merkel didn’t whimp out. A lot of nations around the world have met with the Dalai Lama, so it was not too much of a risk for the German Chancellor. I wonder if German nationalists felt proud that she didn’t back down from Chinese pressure? Heads of state aroudn the world have met with the Dalia Lama, but none of them will meet with the Taiwan president or standup for Taiwan in the UN. China doesn’t really care about the Dalai Lama or Tibet because it is firmly in their grasp and is only a matter of Face similar to human rights and Falung Gong embarassments. What really concerns them is Taiwan, Tibet ain’t goin’ nowhere!

I can see the news headlines now. Ledenhosen factory to be moved to Africa…

China needs to get a life.

China needs to get a life.

Eloquent in its brevity Chris. :bravo: