This is from Maureen Dowd’s Column in the New York Times:

Now that he’s finally fired up on the soup-line economy, Barack Obama knows he can’t fade out again. He was eager to talk privately to a Democratic ex-president who could offer more fatherly wisdom — not to mention a surreptitious smoke — and less fraternal rivalry. I called the “West Wing” creator Aaron Sorkin (yes, truly) to get a read-out of the meeting. This is what he wrote:

BARACK OBAMA knocks on the front door of a 300-year-old New Hampshire farmhouse while his Secret Service detail waits in the driveway. The door opens and OBAMA is standing face to face with former President JED BARTLET.

OBAMA I didn’t expect you to answer the door yourself.

BARTLET I didn’t expect you to be getting beat by John McCain and a Lancôme rep who thinks “The Flintstones” was based on a true story, so let’s call it even.

BARTLET Come on in.

BARTLET leads OBAMA into his study.

BARTLET That was a hell of a convention.

OBAMA Thank you, I was proud of it.

BARTLET I meant the Republicans. The Us versus Them-a-thon. As a Democrat I was surprised to learn that I don’t like small towns, God, people with jobs or America. I’ve been a little out of touch but is there a mandate that the vice president be skilled at field dressing a moose —

OBAMA Joke all you want, Mr. President, but it worked.

BARTLET Imagine my surprise. What can I do for you, kid?

BARTLET I can’t give it to you.

BARTLET He’s promised to eradicate evil and that was always on my “to do” list.

BARTLET And he’s surrounded himself, I think, with the best possible team to get us out of an economic crisis. Why, Sarah Palin just said Fannie Mae and Freddie Mac had “gotten too big and too expensive to the taxpayers.” Can you spot the error in that statement?

OBAMA I appreciate your sense of humor, sir, but I really could use your advice.

BARTLET Well, it seems to me your problem is a lot like the problem I had twice.

BARTLET A huge number of Americans thought I thought I was superior to them.

OBAMA I mean, how did you overcome that?

BARTLET I won’t lie to you, being fictional was a big advantage.

OBAMA What do you mean?

BARTLET Yes, and you’re losing a ton of white women.

BARTLET I didn’t even think there were that many white women.

OBAMA I see the numbers, sir. What do they want from me?

BARTLET I’ve been married to a white woman for 40 years and I still don’t know what she wants from me.

OBAMA How did you do it?

OBAMA I don’t mean your marriage, sir. I mean how did you get America on your side?

OBAMA That would make it easier.

OBAMA What the hell does that mean?

OBAMA I’m not. They pivoted off the argument that I was inexperienced to the criticism that I’m — wait for it — the Messiah, who, by the way, was a community organizer. When I speak I try to lead with inspiration and aptitude. How is that a liability?

BARTLET Because the idea of American exceptionalism doesn’t extend to Americans being exceptional. If you excelled academically and are able to casually use 690 SAT words then you might as well have the press shoot video of you giving the finger to the Statue of Liberty while the Dixie Chicks sing the University of the Taliban fight song. The people who want English to be the official language of the United States are uncomfortable with their leaders being fluent in it.

OBAMA You’re saying race doesn’t have anything to do with it?

BARTLET I wouldn’t go that far. Brains made me look arrogant but they make you look uppity. Plus, if you had a black daughter —

OBAMA I have two.

BARTLET — who was 17 and pregnant and unmarried and the father was a teenager hoping to launch a rap career with “Thug Life” inked across his chest, you’d come in fifth behind Bob Barr, Ralph Nader and a ficus.

OBAMA You’re not cheering me up.

BARTLET Is that what you came here for?

OBAMA No, but it wouldn’t kill you.

BARTLET Have you tried doing a two-hour special or a really good Christmas show?

BARTLET Hang on. Home run. Right here. Is there any chance you could get Michelle pregnant before the fall sweeps?

OBAMA The problem is we can’t appear angry. Bush called us the angry left. Did you see anyone in Denver who was angry?

BARTLET Well … let me think. …We went to war against the wrong country, Osama bin Laden just celebrated his seventh anniversary of not being caught either dead or alive, my family’s less safe than it was eight years ago, we’ve lost trillions of dollars, millions of jobs, thousands of lives and we lost an entire city due to bad weather. So, you know … I’m a little angry.

OBAMA What would you do?

BARTLET GET ANGRIER! Call them liars, because that’s what they are. Sarah Palin didn’t say “thanks but no thanks” to the Bridge to Nowhere. She just said “Thanks.” You were raised by a single mother on food stamps — where does a guy with eight houses who was legacied into Annapolis get off calling you an elitist? And by the way, if you do nothing else, take that word back. Elite is a good word, it means well above average. I’d ask them what their problem is with excellence. While you’re at it, I want the word “patriot” back. McCain can say that the transcendent issue of our time is the spread of Islamic fanaticism or he can choose a running mate who doesn’t know the Bush doctrine from the Monroe Doctrine, but he can’t do both at the same time and call it patriotic. They have to lie — the truth isn’t their friend right now. Get angry. Mock them mercilessly; they’ve earned it. McCain decried agents of intolerance, then chose a running mate who had to ask if she was allowed to ban books from a public library. It’s not bad enough she thinks the planet Earth was created in six days 6,000 years ago complete with a man, a woman and a talking snake, she wants schools to teach the rest of our kids to deny geology, anthropology, archaeology and common sense too? It’s not bad enough she’s forcing her own daughter into a loveless marriage to a teenage hood, she wants the rest of us to guide our daughters in that direction too? It’s not enough that a woman shouldn’t have the right to choose, it should be the law of the land that she has to carry and deliver her rapist’s baby too? I don’t know whether or not Governor Palin has the tenacity of a pit bull, but I know for sure she’s got the qualifications of one. And you’re worried about seeming angry? You could eat their lunch, make them cry and tell their mamas about it and God himself would call it restrained. There are times when you are simply required to be impolite. There are times when condescension is called for!

OBAMA Good to get that off your chest?

BARTLET Am I keeping you from something?

OBAMA Well, it’s not as if I didn’t know all of that and it took you like 20 minutes to say.

BARTLET I know, I have a problem, but admitting it is the first step.

OBAMA So what about hope? Chuck it for outrage and put-downs?

BARTLET No. You’re elite, you can do both. Four weeks ago you had the best week of your campaign, followed — granted, inexplicably — by the worst week of your campaign. And you’re still in a statistical dead heat. You’re a 47-year-old black man with a foreign-sounding name who went to Harvard and thinks devotion to your country and lapel pins aren’t the same thing and you’re in a statistical tie with a war hero and a Cinemax heroine. To these aged eyes, Senator, that’s what progress looks like. You guys got four debates. Get out of my house and go back to work.

OBAMA Wait, what is it you always used to say? When you hit a bump on the show and your people were down and frustrated? You’d give them a pep talk and then you’d always end it with something. What was it …? 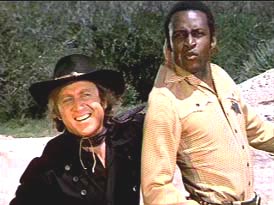 Where’s all the white women at?

and i thought george carlin was dead!

I don’t know whether or not Governor Palin has the tenacity of a pit bull, but I know for sure she’s got the qualifications of one. And you’re worried about seeming angry? You could eat their lunch, make them cry and tell their mamas about it and God himself would call it restrained.

I miss that show.

Charlie Wilson’s War was nice but just a taster, really. I wasn’t at all surprised to see his name (as executive producer) on one of the Life on Mars episodes, either.

Now if they would do that on SNL soon, SNL would be funny again…