I never used to use the handbrake for parking in the UK for exactly that reason, but then I had a pool car for a while and my Big Jessie co-workers used to complain when I left it in first gear facing a stone wall.

Need to get back into the habit. Parked up three weeks and it was pretty solid, though it free’d up eventually.

What are you driving?
You know in Taiwan they have never heard of copper grease. other than your parking brake cable possibly being stuck, it may be a simple case of lubing your brake shoe mechanism and between your shoes and backing plate.

My understanding was that the commonest reason for this behaviour was damp brake shoes stuck to the brake drums by corrosion.

I’ve had the front brakes freeze-on on a Renault Dodge truck that had stood a while. That was wheel-cylinder piston corrosion. Hope its not that, cos I’m told Daihatsu parts are expensive

I’d be (slightly) surprised if its the cable, because I wouldn’t expect that could be freed by driving it. Probably applies to the wheel cylinder too.

Havn’t had the drums off yet, because I STILL havn’t located any axle stands for sale down here that are small enough. The (relatively) good tool store in Kaoshiung has the bottom of some stands but they’ve lost the tops and they apparently can’t be arsed ordering some in.

I remember you gave me a location in Taipei. Guess I’ll have to go up there on a shopping trip sometime soon.

A possible alternative stand-top might be the screw-adjusting feet for scaffolding, but the builders merchant where I saw them doesn’t seem to have them any more, and they didnt seem to recognise my sketch.

knock up some stands from old chopsticks. This is Taiwan, you big dummy. You just don’t understand Taiwanese culture.

knock up some stands from old chopsticks. This is Taiwan, you big dummy. You just don’t understand Taiwanese culture.

No DIY here mate. I think its YOU who JDUTC on this occaision.

Actually, I was thinking of maybe making up some ramps from bamboo, but ramps wouldn’t be any good for this job, since of course the wheel has to come off

My understanding was that the commonest reason for this behaviour was damp brake shoes stuck to the brake drums by corrosion. [/quote]

The brake shoe linings are not prone to corrosion as they contain no ferrous material. It could well be the brake shoe frames which the linings are bonded to which are stuck to the backing plate however, and if it is, then you will require some copper grease and either a flat screwdriver to scrape the old rust from the backing plate or a flat file is something. You also better prepare a can of WD40 and a can of aerosol grease to spray down the handbrake cable if it is sticking. If the handbrake cable is sticking then its best to remove it before lubricating it however. It might also commonly be the parkbrake lever assembly on the trailing shoes. There’s a pivot on the top edge of one shoe in each assembly which can eventually corrode and stick after some time. Remember the WD40 and copper grease, they are both your friends.

Typical tools and sundries which you may need for the job are:

For bleeding(in case you pop out the wheel cylinder’s pistons whilst removing brake assembly) :
likely either an 8mm or 10mm spanner, rubber grease, tube, clean empty bottle and brake fluid.
Do remember to leave the WD40 on the bleed nipple for some time and then be extremely careful when opening it. These nipples can snap off terribly easily if a little corroded.

Parts and sundries:
Possible replacement locknut for hub (not sure if the Skywing has one or not)
Possible replacement split pin for drum locknut
Copper grease
WD40
brake fluid
rubber grease (for lubricating inside of wheel cylinder should the pistons come out whilst working)

Wow! Thanks Mr S, lots of detail there.

The shoes aren’t ferrous, but the brake drums they (in my model) stick to are, No?

I was thinking of it as similar to the clutch sticking that happens when a car is unused for a long time, which I thought was a corrosion bond between the clutch plate and the flywheel. Still, if its your experience that that’s not what happens, then it isn’t.

As I said it freed off eventually, using the awesome power of my 998cc engine to break whatever was sticking it. Should probably be looked at though.

At the moment I’d have to take it apart supported by only the jack, since I dont have stands. I guess that might be acceptable (though not ideal) since I shouldn’t have to get under it, (unless the handbrake cable needs attention) but I’d rather wait until I have stands unless it becomes an emergency.

The shoes aren’t ferrous, but the brake drums they (in my model) stick to are, No?

Yes, they are, but even though the drums’ braking surfaces may corrode, the surfaces will not bond to the non ferrous brake shoe linings.
The most common causes of your described sticking from experience in order are:

When removing shoes and other spring components, do only one side of the vehicle’s brakes first. If you are not familiar with the spring positions, then at least if you forget how to reassemble them, you will still have one side to refer to.

Scrape clean and then grease these locations 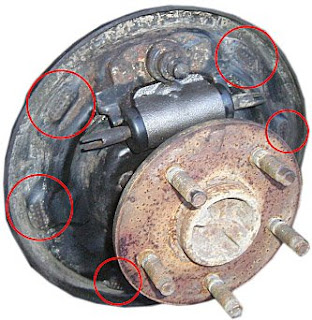 This picture shows some copper grease lubrication added to the common component which also sticks, the parkbrake lever:

This picture is from a basic description of how to replace shoes found on this page.

Of course your rear drum attachment will be different as your vehicle is not rear wheel drive as the one in the link is.

Come to think on’t, why the copper in copaslip?

The stuff needs to stay put when hot and not contaminate the brake linings, rendering them slippy, so I guess molybdenum or graphite are out, but why copper?

Its relatively inert, but its pretty high in the electrochemical series so I’d expect it to potentially cause some galvanic corrosion of the surrounding metals. Wouldn’t aluminium (as in Eds Punk Primer

It might operate as a sacrificial anode, but maybe it’d get used up in the process and stop being an anti-seize layer?

Goldslip might be better, since gold is very inert, soft, and shouldn’t cause corrosion. I reckon you could sell that in buckets to the bling boys.

Advertise it with a busty blonde wearing a gold slip. Midpoint in the Silverslip - Platinumslip range?