Can anyone who speaks better Chinese tell me what is happening here:

All I can make out is that a fight started before a temple procession, but the procession went smoothly. I’m curious what started it. I haven’t seen Taiwanese brawl with police like that for many years.

What I got from it is that diferent groups (of possibly gangsters ) seem to fight over who gets to carry the god Chariot at different points. Why it kicked off?
They just said there were a lot of young people there fighting for it. Even though there were 300 police surrounding the parade making a barrier (perhaps to separate the youngsters) they were still attacked.

They quote the white wolf who says it’s normal behaviour when passions are high.

They quote the white wolf who says it’s normal behaviour when passions are high.

I’ve never managed to wrap my head around Taiwanese religious beliefs. “Temples” seem to be frequented by, and/or run by, TaiKe types who don’t convey a general air of spirituality and piousness. Temples seem to be the approximate equivalent of biker bars. Processions have the same flavour as the Orange Walk.

Relax, the K-man’s got this. 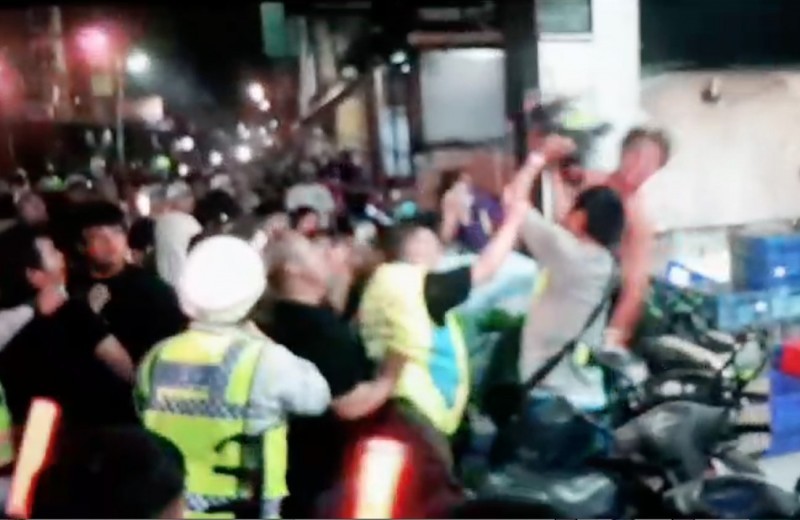 5 injured in melee after pro-China gangster 'White Wolf' shows up at Taiwan's...

Uncanny command of the Engrish language.

There’s a very nice little pub in Oxford called the Turf. I wouldn’t mind getting taken down there.

Yeah, like there’s any actual turf along that route. It’s all binlang-stained pavement.

I’ve never managed to wrap my head around Taiwanese religious beliefs. “Temples” seem to be frequented by, and/or run by, TaiKe types who don’t convey a general air of spirituality and piousness.

It’s one of the last old-world institutions with little government or police oversight where common people still have a place of power and influence. It’s an easy place for gangs to gain influence. The 8 Generals acting groups are the worst. This doesn’t go on in most temples. Most of the small ones are operated by local neighborhood groups, usually old folks. It’s the big temples where multiple devotee groups are involved that things can get nasty, but usually they have a system worked out. This one just went badly because the pro-China guy got involved when there’s a lot of tension.

Not directly related, not sure of the context, but it feels similar. His butt-plate gives me a clue to the story. “Temples” seem to be frequented by, and/or run by, TaiKe types

It’s basically a big mafia. Pay and you get relief in the afterlife! Or you’ll get better when terminally ill. Your wish will always come through depending on what you pay for it.

The leader of the Dajia Zhenlan Temple is a gang leader turned entrepreneur, turned religious leader, turned politician. He was leading the procession and just turned over the pocession to Zhang An-le, an other gangster who is extremely pro-China.

For some unclear reason, the moment Zhang’s hand touched the holy sedan chair, a fight broke through. Zhang’s gang members rushed to protect Zhang. During the skirmish, pepper spray were used, but the news so far cannot identify which party started the fight or used pepper spray.

A CTI news reporter, which is a pro-China news organization, decided to film them in their agony, some still in pain from pepper spray, and that triggered an outrage, and the pro-China gang members decided to beat the living hell out of the pro-China reporter, and the police accompanying him.

Yeah, I couldn’t figure that part out. I guess they didn’t know they were on the same side. He couldn’t exactly start shouting pro-China slogans in public to prove their comradely.
Are there any anti-unification gangs? I know the gang system is a leftover the days of the KMT dictatorship, but did any anti-unification groups go that way or are they just sticking to silly protests?

It always mystifies me how come there aren’t independence /local green gangsters fighting back against the original Chinese ones. Also Matsu worshipping is very much a local religion amongst Minnan people .

I guess that that the gangs wee just posturing between them to get the prestige of carrying Matsu and it got out of control (since this DajIa temple gangster is also KMT linked ).
Or was Zhang not welcome and that’s why they started throwing missiles at the group ? What was the source of the tension? Are Taiwanese people finally getting some balls ?

Amazing the utter devotion by so many people to support temples run by gangsters…all in the hope of fortune. And not only temples but all sorts of fortune tellers, psychics, spiritualists, etc. My wife’s friend spends NT$1,000,000 annually on various “treatments” to keep her away from trouble. Then there is the money spent at temples and travels around the island to pray at the special locations.
Luckily, she has 3 boyfriends who help financially support all of her habits.

It always mystifies me how come there aren’t independence /local green gangsters fighting back against the original Chinese ones.

A Taiwan Antifa?
Maybe it was some pro-independence temple group. I am curious about what spurred it.

Michael Turton has some interesting analysis about the connection between Matsu and unification gangsters.

The Late Immigrant gangs, such as Bamboo and Sihai, were fostered by the KMT. They were much more centralized and organized.

The local gangs were fractured and regionally focused before the KMT gangs. All they wanted to do was business as usual.

The KMT would use the Late Immigrant gangs as hit man, especially for international jobs to avoid responsibility. Zhang Anle, a founding member of the Bamboo fang, was tasked to murder Jiangnan, who lived in the US and wrote a biography of CJK. The KMT let Zhang and his boss out to dry after the job was done, and feeling betrayed Zhang ratted the KMT out. Since then he has been working for the CCP instead.

To put up a show for the Americans outraged by the killing of Jiangnan on US soils, KMT our up a show of wiping out gangs. They largely left Bamboo gang alone, and went after the local gangs instead.

That’s when some local gang leaders banded together in jail and formed Tiandao league to counter Late Immigrant gangs.

For most of the 90s Tiandao league was quite successful. Recently, as most of the original founders past away, it’s not as unified as it once was.

Yan Chingbiao, the leader of Dajia Zhennan temple is a more local gang leader. His gang pretty much has control of most of central Taiwan.

What, in this context, is a Late Immigrant? KMT refugees, or the later groups that trickled in?
What exactly are gangs controlling in central Taiwan, besides prostitution and gambling? And I’ve heard grey market night market areas.

People who arrived right after the Japanese era.

People who arrived right after the Japanese era.