Pollution in the winter in Kaohsiung?

If I had a penny for every time I’ve worn a mask on a bad air day and someone asked me if I had a cold, well I’d have a lot of pennies.

Looks nice but there’s still some moderate air pollution in that photo.

So because many places are dirty shitholes so ehow that justifies this complacent lazy-assed attitude towards poisonous shit in our air? My lord, we really are screwed.

Ive been in kaohsiung and pindong a long time. I dont live there now but am still always there for work and family. Its terrible most of the time unless there are rains. Koahsiung city is coastal so has benefit of winds which hides a lot of its own created pollution. Go into Qishan, meining, sandimen, dawudhan etc etc where that crap blows in and gets stuck. And it rains more there. Its still shit.

And the picture from way up high in kaohsiung. Yes. Way up high, amd it still shows TERRIBLE pollution. Jesus, look at the lower portion of the sky in those pics and the color…thunderstorms at 10f height only?

It looks blue up straight because you are looking through a thinner cross section of the air where pollution hangs out. Its essentially gravity. Pollution is particle bits suspended in the air. They have weight and will eventually settle (like muddy water). So if you look forward, horizontal, you look through a greater distance of shit suspended in the air as compared to straight up. Secondly when you look up you have basically no meaningful referrence points as far as distance vs visibility. Stars, moon and sun are pretty far away. Blue maybe but there is no easily determined distance. And as brianjones mentioned, it is not often really blue…its dusty blue there. Whereas if you look on a more horizontal plane you can use buildings and mountains with a known distance and judge visibility with a standard.

This should be grade school common sense. The fact we think it is ok sometimes and that is ok kind of shows that we are right on track with the success of great empires like the egyptians and romans.

This should be grade school common sense. The fact we think it is ok

I agree and often tell my wife who prob thinks I’m nuts.

I think it’s nuts kids are taught Sin and Cos and Tan and Quadratic Equations but not how to eat healthy or what pollution levels are harmful , how to analyse the numbers and how the various chemicals and particles damage our health.

Australia is the new India. 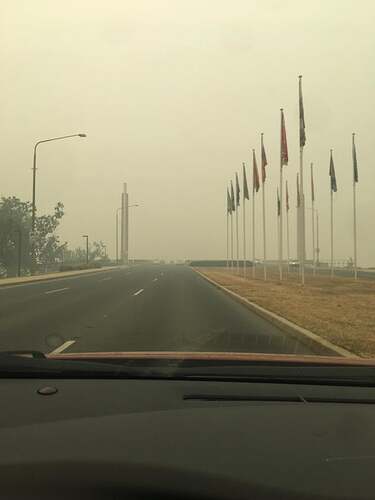 Australia is the new India. Canada gets like that in summer as well. 800 plus last year. But without those fites its normal 0 to 30.

Particle quantity based on fires vs factories should be easily understood why they are different.

Thats a bit of a problem when using simple ppm of partcle sizes. Doesnt distinguish between what types of pollutants (qualative).

Hope they get the smoke under control. Plays hell on your lungs, and everything you own.

Have you not been following the news? The entire Eastern part of the country is on fire.

Well thats a shame! Hope for the best.

No i have not been following international news at all for a couple months. Could be in ww3 and i probably wouldnt know. I inly come here, email and line otherwise im at work.

Any new nearby nuclear accidents i should know about?

Consistent 100+ even 150+ aqi readings lately. Not even a day break. What a toxic s*hole this city becomes with the change of seasons…

I don’t think I’ve ever been to Kaohsiung on a clear day.

Consistent 100+ even 150+ aqi readings lately. Not even a day break. What a toxic s*hole this city becomes with the change of seasons…

Just cause it rains and puts that pollution into the soil and water (thus food) doesnt mean it’s gone in the rainy season, still ne created at astounding rates

I lived in Kaohsiung for 4 years, and moved up to Hsinchu last year.

Went back down to Kaohsiung this past weekend for the first time since leaving and was just shocked at how terrible it was. Thick white haze covering everything. I guess I had forgotten how bad it was or just grew used to it when I was living there.

Can’t believe it took me 4 years to leave. Couldn’t get back up north quickly enough.

I have been down South this week. It’s been really really bad. From Taichung down it sucks but down Chiayi and Tainan it was bad as I have ever seen it. It’s a bit sad to be honest. It’s one giant environmental and health fail. Never mind covid and folks wearing the masks forever.

Yes, it’s the milky look to the sky which is caused by the pm2.5 small particles scattering the light. When you look straight across at hills and the hills are hazy and the mountains behind disappear…again that’s a giveaway.

My kid asks me everyday is this fog or pollution or clouds. It’s not that easy if you grow up here to differentiate. If you can’t see any blue sky but see the cloud up high and the milky look…that’s smog/haze. You should be able to see the blue sky in the gaps between high clouds even if there are clouds.

Southern and Central Taiwan residents suck in all the shit to benefit the rest of the country. Since they don’t protest or do anything about it what are we supposed to think of them?

Yeah the drive from Tainan to Kaohsiung was certainly the worst. It seems like we saw a lot of just … open fires.

Not sure from what but seems like we saw at least 5 or 6 fires coming from open areas off the highway on just that stretch alone. Tons of smoke everywhere. Really gave the impression of being a wasteland. Which is a shame since I really like Tainan and Kaohsiung as cities.

They are burning the rice straw left over after harvesting. I know cos the inlaws just harvested their rice.