Post two of your favorite music album covers and give reasons why you like the artwork. For Example:

I like the fact that this above album looks like a Hot Rod Bubblegum Sticker. I don’t like the music on it as much as the band’s earlier albums. This is a weird one. I like the fact that the album cover looks like Australia might have after a nuclear war and really fitted the times for me.(1984) The album’s called Red Sails in Sunset.
“Danger lurks behind the spreader and Charlton Heston casts the first stone”

Please don’t post the sandpaper album cover that The Feederz(Vocalist Frank Discussion is now married to Jello Biafra’s wife) have. It’ll damage the other covers. Please limit the covers to two. This could be a pretty and interesting musical orientated thread. You don’t have to like the music of the covers you post, just the artwork. Searching Google Images is useful.

All my favourite album covers are here.

Wow. You googled “worst covers ever”.

They really are my favourite because they make me laugh.
I found the link via BoingBoing a few months back.

They really are my favourite because they make me laugh.

Well I guess that is a valid reason. The Beatles Butcher Cover A great story behind it. One of the rarest records in the world. I found one at a garage sale and paid a buck for it. Mine is a 3rd state.

Oh, My avatar is an old rare album too.

Not because it’s anything particularly artistically special or anything, but I like the clever idea - the mashing together a number of (if not all of - I can’t quite pick them all) the album/EP/single covers the songs on the CD come from. It’s like a puzzle. (BTW, for the Kiwi fans of Supergroove out there - anyone able to name all the CD covers included? I’ve got Traction, Tractor, Here Comes the Supergroove, Great Mixes, and possibly Can’t Get Enough.) A three albumn set, so there were two inner sleaves with artwork by Roger Dean. Yes is one of my all time favorite bands and the album cover fit with the music perfectly. Real spacey stuff. The only thing was that this albumn was live and I would prefer to hear the studio stuff. They were very good live. I have a DVD of them live in Philadelphia 1976 and have seen them once. Unfortunately, Rick Wakeman wasn’t with them when I saw them.

My favorite Yes albumn is this one. If you listen to Close to the Edge and close your eyes, it is quite easy to imagine islands floating in the sky.

Here are a couple I remember from high school.

The first bare ladies I ever had in my bedroom.

The first bare ladies I ever had in my bedroom.

Not quite as titillating, sandman, but I’ll bet you had this album too. I remember getting excited about the cover, and the music, as a young child.

But my favorite nudity/food products album cover was the below one, which I bought used when I was in high school, just so I could post it on my wall:

I remember that cover from when I was little. My mother had that album. Certainly not the first time I had seen a naked woman, but first I had seen one covered with honey. I’m just using ones that I have that I liked… 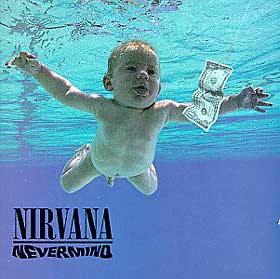 Goes to show that the rat race begins at birth. Incidentally, my best friend in high school was forced by the principal to put a band-aid over the baby’s penis when she wore this cover on a t-shirt.

Turns out the dyslexics were right…

This one is soooo Taiwan… well, this is certainly one of the most infamous…

check here for an enlargement of the…uhh…pertinent bits.

[quote=“hsiadogah”]This one is soooo Taiwan…

[/quote]
That won’t be topped! You should put that in Jaboney’s thread about “typical Taiwan” or whatever its called.

Not such an outstanding album but I like droodles. This cover is from Frank Zappa’s “Ship arriving too late to save a drowning witch”.

I thought this cover (and the music) was pretty cool at the time. Emerson Lake & Palmer’s “Brain Salad Surgery”: When you opened it up it looked like this: Doesn’t seem like such a big deal any more, but at the time. . .

I never thought I’d say this, But I really do miss album art. Whenever I see this cover, it takes me back to a great time. Talking Heads rocked my world.