OK…my wife mentioned that as she was flipping through the TV channels a day or so ago, she always “remembers” stuff like this a few days later, she saw some Chimei Hospital medical personnel talking that they were finally going public with the information that the “wounds” on A Bians lower abdomen really did not appear to be consistent with a bullet wound.

Did anyone else see or hear about this?

That’s cause A-bian was shot with a grassy knoll.

That’s cause A-bian was shot with a grassy knoll.

[quote]A number of doubts hanging over the incident have yet to be cleared up, according to Vickers.

On the morning of March 19, Taiwan National Police Administration Deputy Director General Liu Si Lin was informed that triad members had planned to fire shots during Chen and Lu’s parade “to cause chaos”. But security was not tightened for the duo’s motorcade.

Three “presidential” doctors, rather than the two usually appointed for election activities, accompanied Chen on March 19. The decision has yet to be explained.

During the high point of a very closely contested election, Chen took an unannounced 90-minute lunch and break from 11:50 am to 1:20 pm.

There was also the yet unexplained switch of Chen and Lu from the “presidential” car to a totally unprotected vehicle, a red jeep. The driver was personal secretary to Municipal Counsellor for Tainan Mid-west District Kuo Shing-liang, who was not security trained.

The decision to use a non-security trained driver was “unusual”, especially after Liu of the National Police Administration was informed of the possibility of a possible shooting incident.

Also Vickers said he could not believe the lack of any appropriate reaction from “presidential” aide-de-camp Chen Tsai Fu and other security personnel when a projectile damaged the windscreen of the red jeep. The lack of reaction could have left Chen and Lu in a “killing zone”.

There were “serious discrepancies” in the initial statement of Chen, including the alleged application of ointment by a security guard, and an unconfirmed statement by Dr Tan Guang Huan, deputy head of Song Shan Hospital, that two presidential doctors got on the jeep and “wrapped Chen and Lu’s wounds with a bandage”.

Vickers said the apparent lack of a complete body check of Chen for other injuries or an X-ray of Chen prior to cleaning and suturing the wound was hard to believe.

What’s more, the reported recovery of a bullet head inside Chen’s clothing was not impossible but certainly extraordinary. It was apparently found only when Chen was X-rayed.

There was also the reported recovery of another bullet at an undisclosed time while the vehicle was at Chi Mei Hospital.

Speaking of the first bullet, Vickers said the evidence of the location of this bullet was not fully determined.

After the incident, two cartridge cases were discovered close together. This suggests two shots were fired from at or near the same spot on Chen’s motorcade route.

“If, as has been alleged, two shots were fired from one location from one firearm, it is extraordinary that one bullet is copper and the other is lead,” he said.

When Chen was taken to the emergency ward at Chi Mei Hospital, “presidential office” photographer Liu Si Ming admitted he had taken many photographs, yet many were apparently suppressed. Presidential Office spokesman James Huang explained later the images were “too bloody”.

This contradicted the lack of blood on Chen’s clothing resulting from a wound of this type.

Dr Henry Lee who flew to Taiwan to conduct forensic examination three weeks after the incident also emphasized the lack of blood on Chen’s clothing.

“This is highly surprising as, in the experience of International Risk, such a wound would have caused a lot of blood,” Vickers said.

He pointed to the lack of transparency regarding the forensic examination.

“We do not doubt the integrity of Dr Lee who is an eminent scientist, but the provenance of the materials he was given to work with so long after the event,” Vickers said. “Lee highlighted his finding of blue and white fibres on the bullet head. But these were not consistent with Chen’s clothing on March 19.”

The release of an X-ray image with a bullet apparently near Chen’s spine subsequent to the determination by the doctors that there was no bullet inside Chen’s body was intriguing.

This could have led some TV viewers to believe Chen’s injuries were more serious than they actually were, Vickers said.

At the end of the interview, Vickers showed a Japanese novel published in 2001, “The Secret Emissary of David”, which depicts an assassination attempt on Chen during an election campaign and his re-election on a mass of sympathy votes by a margin of 300,000 votes.

Well, if it was all a ruse, it succeeded. Four more years! Yeah! I bet the country greaseball’s REALLY laughing now.

Links to blogs are blocked at work, but does this help?

Well, if it was all a ruse, it succeeded. Four more years! Yeah! I bet the country greaseball’s REALLY laughing now.

No way, man. That chair must have really hurt. Amazing no one saw it coming or going.

I wonder why Chen wasn’t able to push through a change to a Republic of Taiwan in time for him to be able to run for a third term? (Which would be technically only be his first term as president of the new republic.)

No way, man. That chair must have really hurt. Amazing no one saw it coming or going. 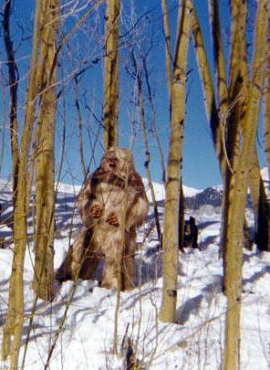 [quote=“Muzha Man”]No way, man. That chair must have really hurt. Amazing no one saw it coming or going.

Is that yeti? Are you saying yeti saw it? Damn, I could have asked him when I was in Tibet and solved this whole mystery.

Wait a minute…When was the last time it snowed in Tainan…Holy snowflakes, Batman, we’re following a cold trail.

[quote=“Jack Burton”]no, no, no. that’s a if a bear shits in the woods photo.

You can’t always believe what you read. Anyways, my statement was more metaphorical.

Read the link. It’s yeti.[/quote]
You can’t always believe what you read. Anyways, my statement was more metaphorical.

why do they come up with this story now? I though it was a blow up for next Feb or something…

I recall the United States sent a team out here as soon as the shooting took place. That was a medical team whose single goal was to view the wound and see if it was a bullet wound.

“Dr. Wecht, however, said after looking at the wound and taking some photos and measurements he saw nothing there inconsistent with it being a gunshot wound.”
cyrilwecht.com/journal/archi … amines.php