So how do we say 單點捱還是外帶?

I think in America, they just say “Would you like a ‘combo’?”

But is that only in America???

As for the “single” option, I don’t think they offer that, because it’s a bad sales tactic.

Which I’d translate “would you like that by itself or as part of a set meal/special meal”. The “combo” does sound sort of American. or at least McDonaldsy to me.

Oh, shit… I’m so embarrassed. I think the brain-fairy came last night and took part of my Broca’s area…
Oh… I have lost face. I must commit cybercide…
Sinister Tiddlywinks is no more.
I will now be reborn as…

First of all, that guy “Sinister Tiddlywinks”'s Chinese is awful and Bu Lai En is absolutely right.

In South Africa we say “a full house”, or what?

I guess 單點 is:
“Would you like that by itself?”
That rings a bell.

That still sounds American and McDonaldsy to me.

That still sounds American and McDonaldsy to me.

Brian[/quote]
Yeah, but in NZ pretty much the only places that offer set meals of any sort are American and McDonaldsy.

Come to think of it, isn’t the most common way - at least back home - the wordier way: “Would you like insert other items of set meal here with that?”

I agree. That was what I originally thought.
“Would you like fries and a drink with that?”

This is a good sales technique since people are inclined to say “yes”.

I’d never heard “set meal” before coming to Taiwan. I always thought it was one of those weird Chinglish things like “NEW OPEN” :s .

Isn’t the McDonalds thing
“Would you like fries with that?”

Or maybe that was just in Australia.

They’ve gotten rid of that in the last year as they wanted to change their image to be more health orientated. Just before I left in March, they started offering fruits, low fat smoothies, low fat yogurt, salad wraps, sandwiches and cooked the fries in canola oil rather than fat.

And, they were also refurbishing all the stores from the kiddie looking florescent coloured plastic table and chairs to a modern, funky cafe look.

The USSR used to seen as inferior for making people queue up for a set meal/ration. Now that MacDonalds are doing it, it’s OK. Compare the two scenes below. Both are waiting for a set meal in a queue. 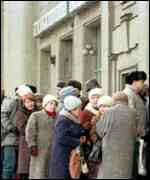 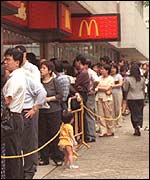 In the States, this is a classic “avoidance” item – I mean that people don’t say it as a noun. They will ask, “Just the hamburger? Or the meal?” to mean 單點還是套餐. It’s not elegant, in that you have to know what the item to be ordered is, or use a supraordinal (“Just the cheeseburger?” or “Just the entree?” “Just the sandwich?” etc.) but it’s what people do here.

Not everything has a one-to-one correspondence, especially keeping the parts of speech, which is why translators still have jobs. Otherwise gigantic computer dictionaries would take over our industry.

“Would you like X with that?” isn’t the same thing, because quite often even after you’ve ordered a set meal/combo/whatever, you’ll be asked to add that week’s promotional item: “Would you like a chou doufu sundae with that?” The “would you like X with that” pattern is for upselling (getting the customer to order more than he had intended) rather than specifically pushing “value meals” or “combos” which are really ways to sell inexpensive items in large quantities (fries, soda) thus raising the price of the package while giving the appearance of economic “value”.

I don’t think you can use the term “a la carte” unless there are actual cloth napkins in evidence in the restaurant.