I know some of you hail from Southern California. Just hope your nearest and dearest are all OK. Pretty bad-looking situation.

I have family in the area. They haven’t had to evacuate yet, but they’re preparing to do so if need be.

That’s what happens when you build urban sprawls without paving everything over with concrete first. This whole “One with Nature” architectural design certainly has its drawbacks.

Quite right, and I wish you nothing better than a concrete box and soon.

IS this Aussie revenge mark x? You know, they replanted forrests in Cali with Aussie gum trees. Problem is they compete by attracting conditions to burn out rivals. Dems some tough trees.

[quote]California
In the 1850s many Australians traveled to California to take part in the California Gold Rush. Much of California has a similar climate to parts of Australia and some people got the idea of introducing eucalypts. By the early 1900s thousands of acres of eucalypts were planted with the encouragement of the state government. It was hoped that they would provide a renewable source of timber for construction and furniture making. However, this did not happen, partly because the trees were cut when they were too young and partly because the Americans did not know how to process the cut trees to prevent the wood from twisting and splitting.[7]

One way in which the eucalyptus, mainly the blue gum E. globulus, proved valuable in California was in providing windbreaks for highways, orange groves, and other farms in the mostly treeless central part of the state. They are also admired as shade and ornamental trees in many cities and gardens.

Eucalyptus forests in California have been criticized because they compete with native plants and do not support native animals. Fire is also a problem. The 1991 Oakland Hills firestorm which destroyed almost 3,000 homes and killed 25 people was partly fueled by large numbers of eucalypts in the area close to the houses.[8]

In some parts of California eucalypt forests are being removed and native trees and plants restored. Individuals have also illegally destroyed some trees and are suspected of introducing insect pests from Australia which attack the trees.[9][/quote]

I believe the term is concrete shoes. My mausoleum will be far away from trees and other burny things, to ensure Mother Nature is not tempted to vandalize my property.

The same cannot be said of Mel Gibson and Olivia Newton John, their Malibu mansion are buring to the ground. I hope their insurance covers their lost.

That’s what happens when you build urban sprawls without paving everything over with concrete first. This whole “One with Nature” architectural design certainly has its drawbacks.

Sure would take alot of pavement. These fires jump 10 lane freeways.

Does one need to buy carbon credits for wildfires?

That’s why next to the highways, you cut down the trees and build a huge mall with a paved parking lot. Next to that you build a huge apartment complex made of non-flammable steel, concrete, and glass. Then a huge school with a paved playground…you get the picture. If you don’t need to repaint it at least once every 5 years, you cut it down and replace it with something that uses electricity.

You don’t see people in Taipei worry about wildfires do you?

Teach those tree huggers a lesson. Tree are dangerous things to home owners. They’re either drop dead on top of houses and cars, or they decide to participate in fire. People think they aren’t dangerous because they provide shade, and look pretty. But those of us that had to file an insurance claim against those things, know they are evil, with malicious intent, all of them. I wouldn’t be surprise to discover they throw children off of themselves breaking their arms on the way down.

Their roots clog up pipes to the sewer, their boughs drop on top of cars dinging the body…

Replace them with plastic, steel, or concrete I say.

“I see your hair is burning…” -The Doors

Just saw on CNN that I-5 is closed…Wow.

Just above Oceanside, (Pendleton for you Jarheads) which means that the fire has burned right to the Pacific Ocean in Northern San Diego County.

For all you fellow Southern Californians…Hope your families/friends and their homes are safe.

Looks like LA is fine. With the lack of trees and forest there is no need to worry about wildfires. 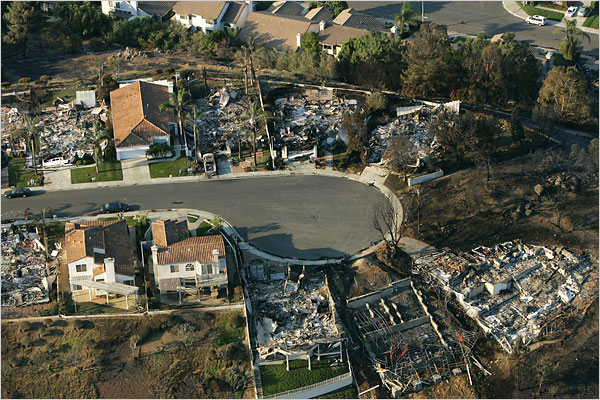 Here’s a good interactive map, if you want see (relatively) precisely where the fires are/were.

Looks like LA is fine. With the lack of trees and forest there is no need to worry about wildfires.

Right, as anyone would know…Camp Pendleton is one of the major forests in southern California.

I have cousins and close friends in San Diego. Just got the news that one of my friends and his kids had to evacuate yesterday. He isn’t sure if his home burned or survived. Obviously, he and his kids are badly shaken up. He said either there was no evacuation order or he didn’t hear the order. He woke up to find his entire street on fire, got his kids dressed and out the door in five minutes, drove straight into the fire, turned around and went the other way until he found a safe pathway. He’s in a hotel now, checking the lists of burned and saved homes.

The others are okay for now, but prepared for evacuation.

“So far, this week’s fires have destroyed about 1,500 homes and burned more than 700 square miles across five counties, from Ventura in the north all the way into Mexico. The state Office of Emergency Services said 28,000 homes were still threatened.”
http://news.yahoo.com/s/ap/california_wildfires

Anyone know the square mileage of Taiwan?

I-5 is open…I just talked to my cousin, who is driving north through Pendleton as I type this. She says she can see both charring and flames in the nearby hills. She also informs the winds have died down a bit, and that they are starting to get a better grip on the SD North County fire. The biggest one, the Witch fire, took my other cousin out of their Rancho Penasquitos home two days ago. I still have one friend I can’t find who lives in Poway. I also have relatives close to the Santiago Canyon Irvine fire but they’ve so far not had to evacuate, despite being able to see the flames from their house.

Friends up toward Valencia say that this fire may turn out to be the biggest of all by the time it’s done. This is the same area where the 1970 fire that took out our place (in Simi Valley) originated, and the Santa Ana always blow especially strong here.

For those of you with relatives in the area, cell coverage seems better today. I was able to get through without too much hassle whereas yesterday was impossible.

[quote=“MJB”]The biggest one, the Witch fire, took my other cousin out of their Rancho Penasquitos home two days ago. I still have one friend I can’t find who lives in Poway. I also have relatives close to the Santiago Canyon Irvine fire but they’ve so far not had to evacuate, despite being able to see the flames from their house.
[/quote]

My friend who was evacuated with his kids (evacuated themselves, rather) lives in Rancho Bernardo, south of East Pomorado Rd. North of East Pomorado, everything is burned. Only patches of his area were burned, but he drove out amid flames and wild winds all around him.

My cousins and several friends also live in RP, and all were evacuated, although their houses are okay.

An elderly friend lives in Hillcrest, and they’re okay so far.