This guy, this driver, amazing avoiding gun attack. Mostly instinct and skills. Knocks a few vehicles off the road, a u-turn, great.

Then he jumps out with the gun.

Both guys have security experience. 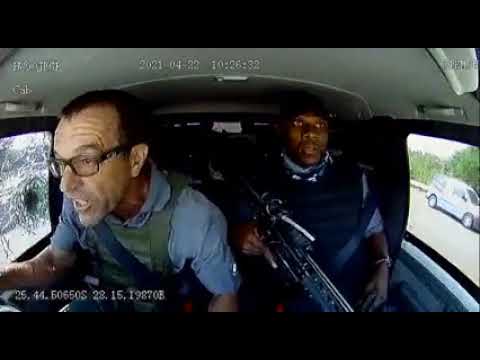 I want to see or know what happened next?

Just calling Josh for a beer after the shootout.

I think they fled according to this.

“The driver of the CIT vehicle managed to evade the robbers for a while but later stopped in wait for the robbers. The robbers fled without taking any money.”

GIVE THE DRIVER A RAISE.

(Shooting starts HERE and he turns into the grey car HERE) Driver: “Fok jou, jou poes.” | “Fuck you, you pussy/cunt”

(The Afrikaans “poes” is either “pussy” as in you are a sissy or coward, or “cunt” as in you are an asshole. Sometimes it sits in between, like here “Try again asshole” would be a less verbatim but accurate translation for the his words.)

(He drives away from the initial shooting)

Driver: “OK.” (or “Good” I am a bit unclear on what he said, it sounded English, but “OK” is an Afrikaans word as well.)

Driver: “Cock the gun” (Guard cocks his pistol, and driver fiddles next to him) “This one” (Hands over the preferred boomstick.)

Guard: (Cocks gun while remaining surprisinly nonperturbed by all that’s going on. Must be almost Friday, amirite?) “OK” while holding the gun ready for the driver to take.

(Some high stakes bumpercars action ensues HERE, the opponents perform a less than ideal overtake, the guard cocks the rifle again, or maybe chambers a round? I am unsure. Help me understand what happens there as I don’t know firearms well.) << Before cocking the rifle he cocks his pistol, I missed that on the first watch.

(Spirited motivation of the direction-finding-wheel and a hasty U-turn is performed HERE.)

(Driving with less oomph now, but still at high speed - From what I see on Google maps according to the latitudes on their camera, and having driven that road daily at one stage, he is driving against traffic now.)

Driver: “They coming after us” << This could be what he said earlier as well.

(Another u-turn is performed HERE, and they pull away with a little tyer squeel. Could also be the hijackers doing a hard braking turn and it’s their tyres we hear.)

Guard: “They can shoot.” (His face says “They made him angry now…”)

(Popping sounds as some bullets find their mark HERE. Guard purses his lips, as if he is dreading having to write a report if they hit his window, aaand then they hit his window. Damnit…) - Last bullet in this volly hits their vehicle HERE

Driver: “Phone Robbie, phone Josh and ask them where they are…”

Guard: (Looking through the contacts on the cellphone) “Ok-Josh” (He finds Josh on the phone HERE)

(They impact what I think must be the median or a concrete barrier. South Africa has various types of these separating some highways and busier main roads) - This happens HERE Either he tried to turn into the parking lot, or the coords are a bit off and he tried to turn up End str and got curbed there.

Driver: “Fucking shoot him” (Uttered HERE I am thinking the coords are a bit off to the West of where the real events happened.)

Hope this helps, they have a thankless job, and I struggled a bit because some of it could have been said in languages other than Afrikaans or English and I wan’t listening for those so could have missed it where I indicated guesses or that I couldn’t make out what was said.

Did the driver say “Come on you cunts”???

The driver is ex special forces I read somewhere else. Not his first rodeo…

The robbers fled without taking any money.

As it turned out, there was no money to take, rather Mobile Phones were the booty on board the vehicle that this one was protecting - yes, this was the escort, the CIT van (with phones aboard) was the real target, seems the idea was to take out the escort first - but they met one tough dude and failed.

Gotta wonder who “Josh” is though - an even tougher dude.

Also according to Reddit thread three attackers were arrested.

Such violence for a bunch of mobile phones. They must need a mini army to empty an ATM, or transport some cash.

Whoever modified that Toyota with Bulletproof Glass and no doubt lots of other stuff would be seeing his sales rise.

Apparently they both got shot and survived, there was an article linked in one of the first YouTube channels to post it.

Checks out with your icon.