I went to Taipei 101 today to do some shopping and I was surprised to see a few guys with PRC flags singing communist songs. There were a few people taking pictures of them, as well. There also seemed to be religious protestors talking about how people are killed in China for their beliefs. Finally I saw someone protesting Germany for not sufficiently paying for WW2 crimes. I’ve been to 101 several times but never noticed any of this before. Is this common?

What kind of traitorous scum sings Maoist hymns and waves that red banner with some shitty yellow stars flag in the heart of Taipei? Should’ve spat on them.

And if they’re PRC tourists they need to GTFO. Permaban them!

The way I understand it it’s not an uncommon sight in that area. Best just to ignore them.

One day, I would love to walk up with the biggest PRC Flag. Start waving it… then light it on fire.

Yeah, I was in a hurry and decided to walk quickly by. But I was tempted to take a picture as people on this forum seem to disbelieve first hand observations without dispositive proof that they happened.

The crazy chinese as some of my friends describe them. I Haven’t seen or heard them in a while. I guess it’s cheap propaganda for the CCP to keep them on the payroll. You’d think they would come up with a slightly more sophisticated method by now.

That would be hilarious, though with my job, my wife’s job, and the fact that we both have to travel frequently to PRC, I cannot take any position at all on the Taiwan/PRC situation publicly.

I don’t understand how they’re allowed to stay here and not deported if they’re indeed PRC citizens. I can’t imagine the South Korean government tolerating pro-North Korean protestors in the heart of Seoul.

It depends on their beliefs. I believe in freedom of speech, but if they are calling for the overthrow of the ROC government and non-consensual reunification with PRC, I agree with you…privately.

It’s been going on daily since as long as I can remember.

The people waving Chinese flags are possibly Taiwanese and members of a group that wants reunification.

Falon gong is out there meditating.

I’ve never seen anything related to Germany though.

Hong Kong supporters have been rallying there also at different times.

I’ve never seen anything related to Germany though.

This one took me by surprise. I don’t read well enough to get the full view in a glance, but the overall message seemed clear as it was written in English and large characters.

the guy in a red car and the chinese flag is a classic.
The yellow falon gong are normally fighting with people or people figthing with then.
Taiwanese protesting about Germany WW2? never see

Some people here have reported having to retreat in short order after provoking these people, and the cops are likely to take the view that you, well, provoked them. So while certain actions may be emotionally satisfying to talk about, I’d note that they do not seem recommendable

Yeah, I was joking earlier when I told OP to spit on them.

In reality it’s good to give obviously crazy people a wide berth. Because you can’t predict how “crazy” will react, and it might be in a dangerous or violent manner. Plus, like you said, the police will have to (reluctantly) take their side if you’re the provocateur.

Still not sure why it’s tolerated though. Free speech usually stops at the water’s edge of treason.

I think the German thing is something about war bonds. I don’t remember the details. 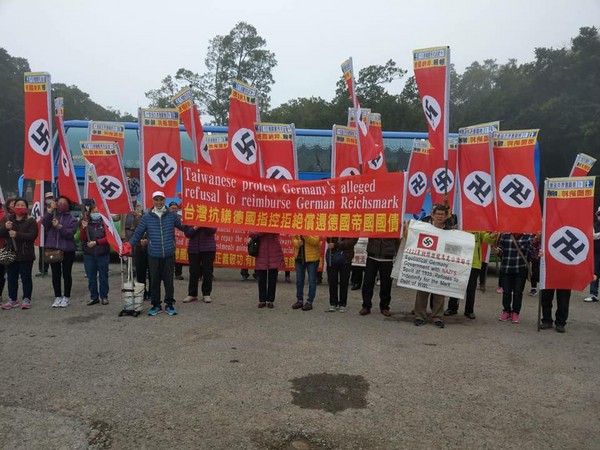 We have definitely been over this before.

I went to the Taipei 101 the other day, and lo and behold, the group that usually waves PRC flags and sings patriotic songs over their megaphones out front, wasn’t there. I don’t think the Falungong was either. Did they all get kicked out (perhaps because of complaints over the Communist group’s tendency to beat people up), or do they just not come out when it’s cold and rainy? Anybody run into them recently?

I think the more recent thread on the topic was started in Temp, ~2 years ago.

I’ll take the liberty of renaming this one.

We have definitely been over this before.

So apparently there are people who are protesting that Germany hasn’t repaid old war bonds and have been fly Nazi flags around and have Nazi decals on the taxis. You would think they were nazis if you couldn’t read Chinese. http://www.epa.eu/human-interest-photos/war-curiosities-photos/taiwanese-protest-germany-s-alleged-refusal-to-reimburse-german-reichsmark-bonds-photos-53681887 https://www.facebook.com/groups/449613792086343/

That is interesting, but the link seems dead.

One day, I would love to walk up with the biggest PRC Flag. Start waving it…then light it on fire.

If you’re a foreigner here, best not to start shit if you are not willing to commit to it.

By that I mean, if you do such an action that somehow provokes China into attacking Taiwan, and then run off to your home country like a chicken once the shit hits the fan, then that would make you not only a coward but total dumbass.

Please don’t even think about doing something that stupid unless you are willing to stay and defend Taiwan.

If you watch you will see some of the protesters filming, these are used in propaganda videos.
Depending on how they spin it, Showing how the Taiwanese support the CCP with their demonstrations agents the government, or single out the negative reactions to show how the people of Taiwan look down on the people of China.