Today I finally got told by a PX Mart cashier that I had won on one of the receipts stored on my PX Mart points card. I’ve been choosing no receipt whenever I’ve been asked, and had queried what would happen in the event of a win the first time I was asked. I need a

Taiwanese ID card to claim the money, but I’m used to that being the case in convenience stores. I’ll definitely start asking for no receipt every time from now on if it’s that easy.

Today I finally got told by a PX Mart cashier that I had won on one of the receipts stored on my PX Mart points card. I’ve been choosing no receipt whenever I’ve been asked, and had queried what would happen in the event of a win the first time I was asked.

I’ve always wondered this as well. Good to know that they actually do notify you if you win.

Update: I had been informing cashiers in advance each time for about ten shopping trips that I was already aware I had won, but that I’m not Taiwanese, so I would have to wait until my girlfriend could accompany me to claim the prize. (She has dislocated her ankle and torn tendons in her foot, and with us living on the sixth floor of a walk up, she has rarely left the apartment since January)

Then last time I went, I forgot, so I was asked again if I had a 身分證. I showed them my girlfriend’s Taiwan ID because I’d been collecting her packages, but they said she had to be present to collect the prize. Then they mentioned that I should hurry up, or the prize would expire. Finally the lady said, as a seemingly throw away remark, 居留證也可以.

Well why in the blazes didn’t someone tell me earlier?!? thank you very much, yes I would like that put on my store card as a sign of appreciation for you providing this service.

Tl;dr: You can use an ARC card to collect the prize!

In my case I have download the following App

Following through on these different apps: has anyone successfully used an “old” APRC number (i.e. not the new updated and non-improved ones) and managed to get receipt winnings deposited in a bank account? My wife’s been messing with this much of the afternoon and she thinks my APRC is the reason she can’t get it to work.

EDIT: Never mind, it eventually worked (there was some field to switch between local ID and non-local ID.) 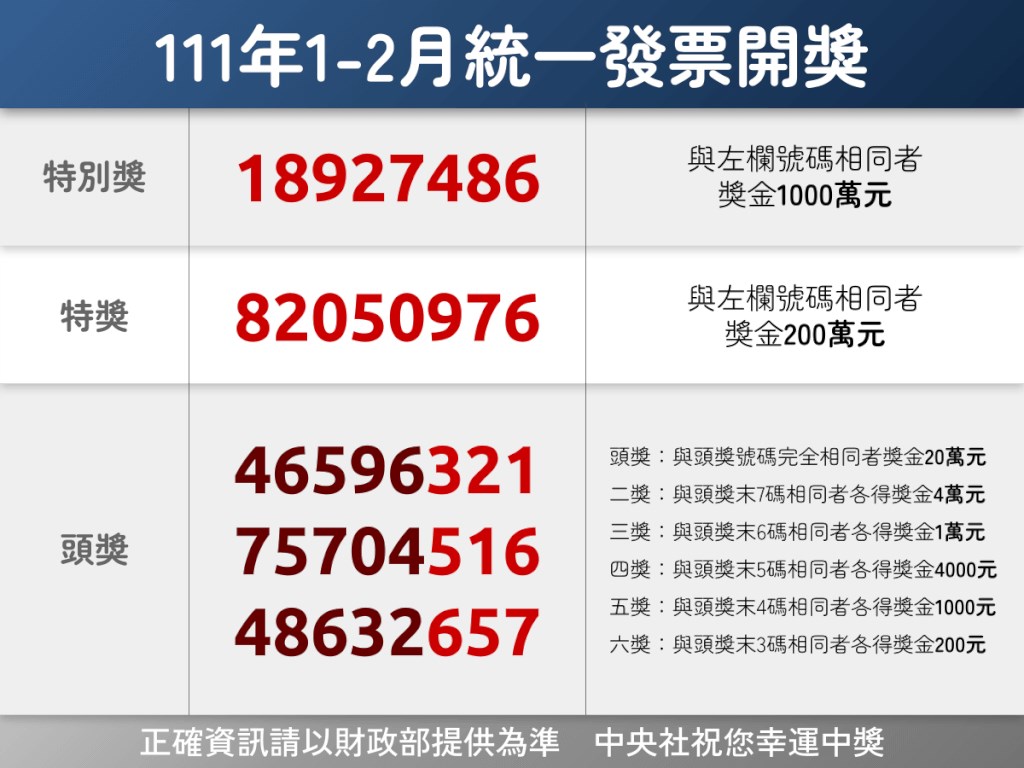 Taipei, March 31 (CNA) Eleven receipts issued by businesses around Taiwan for the January-February Uniform Invoice Lottery had the winning number 18927486, and will each receive the NT$10 million (US$363,320) special prize, including one issued for...

For what it’s worth, this seems to be the new site listing the recent invoice receipt winners, since the Taiwan thing happened of my old links and bookmarks breaking (@slawa’s useful links above are for specific months): 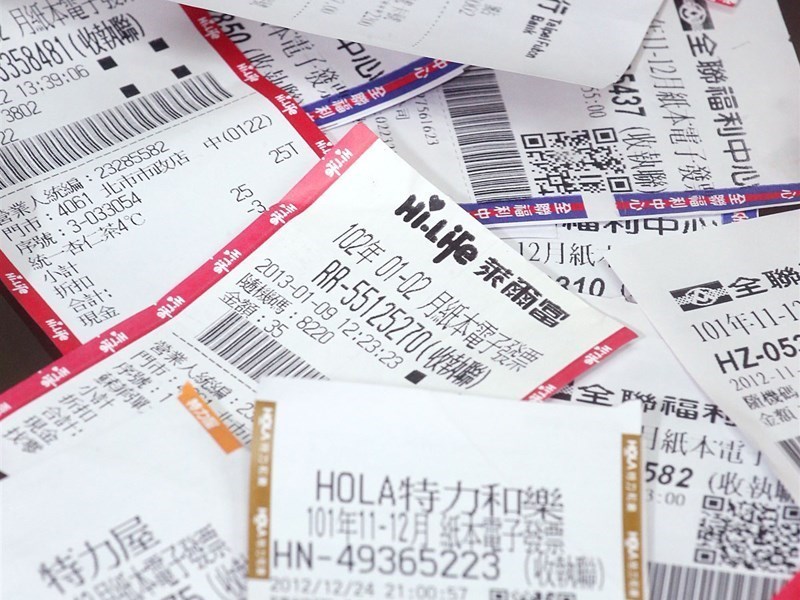 I just did the bimonthly check of my receipts: didn’t win anything, and shredded them because that’s what I’ve always done even if I’m not entirely sure why.

Oops. I now realize I actually checked and shredded the receipts for November, not for September-October.

At least I’ll never know if I would have won anything on the shredded receipts.

I won $700 from my digital receipts. Haven’t checked my paper ones yet but I’m hoping for $10 million 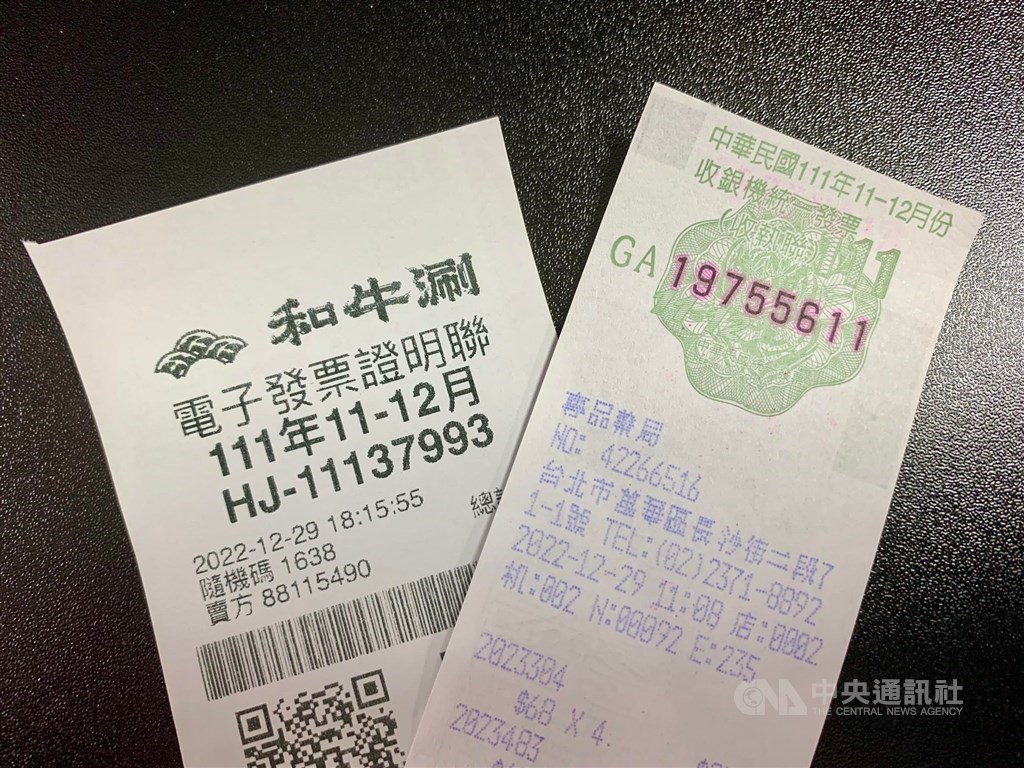 Taipei, Jan. 25 (CNA) The winning number for the NT$10 million (US$330,362) special prize in the November-December uniform invoice lottery is 28089459, the Ministry of Finance announced Wednesday.

I have 4000 once and had to pay tax on the winnings so got 3 something.

I think the taxman will take a little nibble from that! I remember being somewhat confused when handed a bunch of notes and some change instead of a nice crisp NT$1000 note at the post office.

Anyone ever win more than 1000 on these?

I used to almost always win between NT$200 and NT$1000 actually, back in 2016–2018 when I first arrived in Taiwan. Now I probably haven’t won anything at all in a couple of years (maybe once) and it feels like a waste of time checking them tbh.

I think they’ve reduced the probability of winning quite a lot, e.g., by having few or no additional sixth prize winning numbers and diverting some of the prize fund to the electronic receipt/app-based prizes (which I don’t really use).

I think I won NT$200 in the electronic receipt app. How do I check that again? I checked, got a little congratulations, and now I can’t find it - I’m guessing an email will show up next week when offices reopen.

Nothing on the paper receipts, but I only had those for December since I accidentally checked and shredded the November ones on the last cycle.

I’ve won $1000 a few times, although not in a couple of years now. Never more than that.

Yeah, I also have the same feeling, taking off that last combination numbers makes some difference. And I’ve started doing the electronic receipts, but not 100% certain how to check them. I wonder if it’s worth the hassle, guess just holding out hope that I’ll finally strike it rich in the next one, hard to give up on that especially when it’s free