Came across this article and found some of the responses interesting. [quote=“Prospect Magazine”]We asked 100 writers and thinkers to answer the following question: Left and right defined the 20th century. What’s next? The pessimism of their responses is striking: almost nobody expects the world to get better in the coming decades, and many think it will get worse[/quote]

Anyone care to care a flier on what the big issues of the century ahead will be?

For what it’s worth I found the opinions of the following most interesting:

I’m usually too stupid to be in here, hope I don’t let myself down…

Issues for the next 100 years will be…

Those are just my hunches…

Tom, your stupid-funny-silly humor is pretty much hit or miss with me, but this…

[quote=“TomHill”]I’m usually too stupid to be in here[/quote]…is the first really ridiculous thing I’ve seen from you.

The forum’s far too nasty, but it’s certainly not beyond anyone’s reach.
Well, anyone other than…

I’d put your #2 and #3 on my list as well. The others I’d only leave off because their frames of reference are two small for a century-long period of time.

[quote=“Jaboney”]Tom, your stupid-funny-silly humor is pretty much hit or miss with me, but this…

[quote=“TomHill”]I’m usually too stupid to be in here[/quote]…is the first really ridiculous thing I’ve seen from you.

The forum’s far too nasty, but it’s certainly not beyond anyone’s reach.
Well, anyone other than…

I’d put your #2 and #3 on my list as well. The others I’d only leave off because their frames of reference are two small for a century-long period of time.[/quote]

I reckon that dementia will be the next big thing. Science has been working on the body for a long time, and the brain has been neglected. In the UK projections for dementia are astronomical.

Also polar reversal is one of my ‘hot tips’ for the next century! I’m not saying it will happen, but it will become bigger news than it is now.

If my comedy style is ‘hit or miss’ I can accept that. Most comedians work on a ‘clunker to classic’ ratio.

In no particular order, and recognizing that not all of them are consistent with one another:

*The end of the Oil Age; no new technology to save us

*Rise of China and India as the major world civilizations

*Integration of Europe with Middle East and North Africa

*Readily-available genetic manipulation (for offspring). But cloning loses its attractiveness.

[quote]*The end of the Oil Age; no new technology to save us

*Rise of China and India as the major world civilizations [/quote]

How are the world’s fastest developing countries -China and India- going to survive the end of oil and economic collapse, much less become major world civilizations?

I agree with you on the integration of Europe with North Africa and the Middle East though.

My friend Jake, aged 30, is worried about his testicles. He tells me that the right one hangs lower than the left; that the left should hang lower than the right. On bad days, he eats Marmite on stale bread and concludes that he has situs inversus, a rare condition in which all the body organs are reversed in position from right to left. He sees a careworn future in which lovers pity him and tailors snigger; where routine surgery turns him into a game of lucky dip; where Drawing on the Right Side of the Brain leaves him confused, talentless and forlorn.[/quote]

The economic recolonization of Africa.
The ultimate smackdown of radical Islam. (Islam becomes the new Buddhism)
The death of liberalism as an elite pipedream.
Experts will run everything from the market to politics (They already do actually).
The dawn of the tactical nuclear strike.
The privatization of education.
The assimilation of cultures into the melting pots they live in.
The effective treatment of cancer.
Huge money being spent on prolonging life (so the baby boomers never have to die)
Massive adoptions from Asia and Africa as western peoples stop having children, when it so much easier to just buy the one you want.
The return of the (Neo)Luddites, to sit against the Haves as the Don’t Wants.
The growth of black hiphop “mediaculture” over the third world.
Pot STILL won’t be legal.
Cigarettes will.
The rise of the “Don’t give a shit as the world is too complex” apathy support groups.
Cars that run on methane with tubes attached to the asses of passengers.
Onions and beef a favorite dish worldwide.
Great writing on TV and in novels continues, as the quest to distract/entertain takes on vital importance to the mental well being of the mindless drones we will become.

The division of humans into two sub-species.

The human race would peak in the year 3000, he said - before a decline due to dependence on technology.

People would become choosier about their sexual partners, causing humanity to divide into sub-species, he added.

The descendants of the genetic upper class would be tall, slim, healthy, attractive, intelligent, and creative and a far cry from the "underclass" humans who would have evolved into dim-witted, ugly, squat goblin-like creatures. 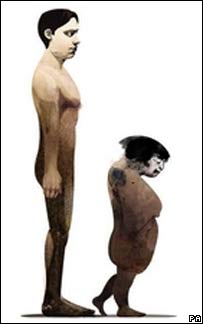 There are definitely signs of this happening in my office.

I refuse to comment on that artists vision, except to say that the dim-witted, ugly, squat goblin-like burger flipper looks rather tellingly Cantonese.

Evolutionary theorist Oliver Curry of the London School of Economics expects a genetic upper class and a dim-witted underclass to emerge.

expects? I thought that had already happened. The dim-witted underclass is variously known as liberals or Democrats…

Jaboney, thank you for posing this topic. The article does open some eyes.

Many serious and topical debates will never end, even after atrocities are halted, justice is served and humanity is heralded. One such horrible reality is that some Americans still desire African-Americans and Hispanics to not have equal rights to own land, vote, or legislate policy, etc.

But this should not stop us from aligning ourselves with what we believe to be important for generations to come.

Prior to elections last November, I asked my House and Senate candidates some straight-forward questions. One of the answers from one of them is very insightful (FYI the candidate is a former forensics investigator in D.C.)

Q: How may America change if US government officials are charged in connection to the attacks of 9/11?

[quote]From an email of a candidate for the House of Representatives, October 27, 2006
A: First, the very pillar of trust in our government would disappear immediately. Society will feel a prolonged denial followed by great anger. The handling of the aftermath of such an announcement would greatly determine the long term impact of such a complete betrayal of public trust. It could run the gamut from anarchy to a power struggles among those who vie for solutions to prevent such an event from ever occurring again. The public could violently rebel against all things government or they could cower in bewilderment. The scenarios are endless. Strong, sane leadership would be absolutely necessary to keep us from reaching a societal meltdown. I would like to think that long term change would be limited after a few months or years of adjustment. I think that conservatism would be dead, at least the current Republican form of conservatism. The public would demand more transparency in government. They would demand human rights. I think that over time society would evolve to a more civilized level in much the same way a country torn by war regroups and rebuilds a more stable society.[/quote]
While this candidate did not win a seat, the answer is extremely thought-provoking. If leaders within the greatest superpower history has known, are guilty of being involved with the attacks of 9/11, will they be classified as one of the greatest terrorist organizations in the world? While I don’t presuppose to know all the facts, the absence of a truthful investigation is leaking (NBC’s 12 News: What if everything we thought we knew about 9-11 was wrong? - Feb. 23, 2007).

So I submit the Truth of 9/11 as a one of The Biggest Questions of our times.

To assist arguments that The 9/11 Commission Report should be taken as truth…
The 9/11 Commission Report: A 571-Page Lie
– listing over 100 points why the report is a lie
http://patriotsquestion911.com
– Senior US Military, Intelligence, Law Enforcement, and Government Officials Question the 9/11 Commission Report
http://911lies.org
– NOT speculating on EXACTLY what happened, first confirming that the official story COULD NOT HAVE happened. Who are the people who are so vehement about not wanting further investigation, and what would their motive be?

[quote]Evolutionary theorist Oliver Curry of the London School of Economics expects a genetic upper class and a dim-witted underclass to emerge.

expects? I thought that had already happened. The dim-witted underclass is variously known as liberals or Democrats…[/quote]

Umm, but I’ve seen you Fred, and I have to say you look not so strangely more like the right hand depiction than the left, and well . . .

Still, loyalty is a definite plus in the dim-witted servile class. I mean, you want your minions slavishly defending their master class right or wrong, right? And yet, in its own way, it sounds so commie.

[quote]Evolutionary theorist Oliver Curry of the London School of Economics expects a genetic upper class and a dim-witted underclass to emerge.

expects? I thought that had already happened. The dim-witted underclass is variously known as liberals or Democrats…[/quote]

Yeah, I remember that happening in “The Time Machine”-the underclass became Morlocks and the upper class became…lunch.