I’ve seen those plastic strap bras in Germany, too but I never though it necessary to buy one…looks like that’ll change

I say be pretty and proud. If you aren’t in a work/formal setting then why not. Do whatever you feel comfortable with. Assume anything inappropriate in Germany would likely be inappropriate here. In any casual setting I’d say it is fine to just trust your best judgment.

That’s what I did in the past. Most people I met I wouldn’t ever see in my life again and my relatives and friends know me, so who cares!
But since this time I plan on staying longer than just a few weeks my relatives gave me the advice because they fear people might get a wrong impression of me which could lead to predjudices and predjucides are not good…mostly. Want they ment was mostly exactly what sukinodeynatsu wrote in her post

[quote=“tsukinodeynatsu”]
Some older men seem to think you’ve obviously up for sex if you’re showing cleavage and will try to pick you up (by riding past you and saying ‘LET’S BE FRIENDS! COME TO MY HOUSE!’ or other such crap. This could only happen to white and black girls though).[/quote]

I look (almost) completely European. Nobody ever suspects I’m half Asian

I’m mostly talking about freetime now. I think at work it’s really reasonable not to try and stick out in such a way

I really don’t see what is the big deal about showing cleavage anyway.

Camel toe, however, is a different story

[quote=“Hamletintaiwan”]
In my previous job even the principle passed out a dress-code. She constantly complained about one of my co-workers because his T-shirts were kind like your examples. [/quote]

So the guy has man boobs or what

Damn, most of the women here have asses like a 6 year old boy. Aint no decent shaped bootie around

But half of Taiwanese TV now consists of starlets flaunting cleavage. There are whole shows devoted to the art and artfulness of displaying all you’ve got and then a bit more.

So how could it be viewed askance by the telly-watching masses if you take your cue from that and expose but a modest amount of your frontal groove?

When I was in Taipei I wore what I considered to be normal, non-revealing clothes, but people often commented on my breasts and cleavage - even when in my opinion I was covered up. The people commenting often seemed to think I was showing off; I wasn’t though, it’s just that what is a normal size in Western countries would be considered large in Taiwan.
So it depends on the size of your bosom, really. The shirts you linked to earlier would be fine, IMO, if you are modestly endowed and the shirts are not tight. If you have bigger-than-average (Taiwanese average) breasts, though, people may feel you are displaying them.
So really we need photos to judge.

Wear whatever the hell you want unless you’re in a professional setting. I never noticed any dirty looks at my ex-gf and she typically wore 2 tanktops in the summer and she had a giant chest (for Taiwan) even though she was half Asian. Perhaps I was oblivious to the dirty looks though.

Move to Japan instead.

Ambulance for Tommy.[/quote]
Add that ambulance for me to. Just reading this thread is making me excited. There is a cleavage problem? Lack of cleavage is a problem!!!

I think we’ve just been had: en.wikipedia.org/wiki/National_Cleavage_Day

This to me is another example of cultural differences.

Let us assume that cleavage showing, or low-necked tops, are considered to be inappropriate for teaching/work/public wear in Taiwan.

Then the OP has two choices.
First, say “I have the right to wear whatever I want. I am a woman of the 21st century” etc. etc. Sure, she has the right. The question is, does she want to deal with the reactions that she WILL get from people in Taiwan, many of whom are known to think this way.

Lots of time, dealing with other cultures while retaining your own way of thinking requires compromise. You can do it all your way, and expect the fallout that will follow; you can do it all their way, and feel more or less uncomfortable or upset, depending on your own temperament and how serious the matter on which you are giving in is to you; or you can find some middle ground, and be only somewhat uncomfortable as you are censured by only some of the people.

Personally, I would assume that Germany’s standards are a LOT more relaxed than those in Taiwan with regard to cleavage, and I would put on some more clothes. But that’s because I figure I’ll have enough trouble dealing with various things in Taiwan (especially in organizations or places I want people to have a good impression of me, so I can get my way on something I really want) and it’s worth it to me to give in on the dress thing in order to get something else I want.

Cross-cultural interactions, in the end, are all about tradeoffs to get what you really want. Give in on the small stuff, and keep your eye on the bigger goals you want to accomplish. If something doesn’t really matter that much to you, and it will benefit you in getting something you want (approval/grades/performance ratings/harmonious interpersonal relationships, whatever) it makes sense to let that particular thing go for the Greater Gain.

I don’t know what you’re all talking about anyway.

Here are some pictures of typical Taiwanese working girls. And they’re an accepted part of local culture. 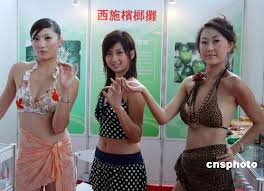 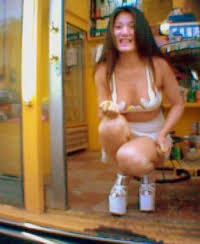 Jesus jumping time-waster batman, slap some duct tape over your collarbones and wear whatever, whenever.

PS I think this decision so empowers our German decision maker, who after all has the luxury of actually WORRYING about mitigating the visual impact of her buxom, that empathy battles lust in a most unserious way if you’re a third party male ala mois. Anyway, OP dear, best of bust, er luck.

[quote=“Omniloquacious”]But half of Taiwanese TV now consists of starlets flaunting cleavage. There are whole shows devoted to the art and artfulness of displaying all you’ve got and then a bit more.

So how could it be viewed askance by the telly-watching masses if you take your cue from that and expose but a modest amount of your frontal groove?[/quote]

My thoughts as well! And I must be living in a different Taiwan. No offense, especially to the women who have commented here, but, I see a completely different reality here (yeah, I’m a man… that could be part of it)… My office is loaded with young women, and many of them are smoking hot and don’t really understand western ideas of appropriate office attire for professionals. I’m treated daily to eye-fulls of loveliness! My female colleagues are constantly bending over and leaning in and squatting and getting into all sorts of actions that seem to me designed to show off some skin. And the ones who have 'em seem not shy at all about wearing low cut blouses and showing a bit of cleavage.

Anyway, I don’t think I’ve ever thought of cleavage as a problem…

Here in Taiwan, there’s a massive cleavage between men’s and women’s attitudes on this issue.

Men’s eyes are ineluctably drawn to the display of cleavage. It generally earns their gulping approval.

Women’s eyes are ineluctably drawn to the display of cleavage. It generally earns their frowning disapproval.

Cleavage represents separation, the point of partition between a woman’s breasts. At the same time, it represents a coming together, accentuated by garments that squeeze those lovely swellings up against each other to deepen and sharpen the cleft between them.

Forgive me if I dwell on this issue. I can hardly help it, since I’m a man.

And always wear clean underwear in case you’re in an accident and have to go to the hospital.

No, Finley, we are the ones being stared at. And we do not like the looks…

Icon, it was just a joke … not a very good one, I guess

I think most women draw a distinction between an appreciative glance from a Ruben Cortada lookalike and an aggressive stare from a taike blue-truck driver, no? Most men like boobs. The world would be greyer (and less populated) if they didn’t.

OP, out of all the cultural differences you have to worry about in Taiwan, this particular worry is somewhere down the bottom of the list. It basically comes down to this:

The transparent-bra-strap thing seems to have been a passing fad.

One thing you should know about: I’m not entirely sure how to put this without upsetting anyone, but I am reliably informed that any, um, protuberances are a big no-no. Most women wear thick, padded bras to eliminate this possibility.

Taiwanese girls , very generally speaking, tend to have nice legs but tend to have smaller boobage then some other nationalities. Hence they flaunt what they got (legs) and shy away from approving show of boobage (out of jealousy mostly no doubt).

But i guess its a mathematical formula you are after. I would venture to say if you show less then one third of total boobage you are probably borderline fine (at the one third mark). One quarter mark you should be fine.

Not that many guys would mind of course.

LiAnne on NMA tv gives you a few hints:

My office is loaded with young women, and many of them are smoking hot and don’t really understand western ideas of appropriate office attire for professionals.

Now that I think of it, this is true. The few offices I worked in in Taipei, honestly one would have thought the younger women were binlang girls, or hookers. One memorable outfit: skin-tight see-through tank top decorated with skulls, a chain for a belt, and a skin-tight mini skirt. Complete with knee-high fake leather boots. And makeup packed on.
And yet people would comment on my cleavage.