Given the escalation of trench warfare in the main COVID threads, I figured we may be able to keep the peace by starting up yet another thread. Here, those of us who think COVID is somewhere towards the bottom of the list of humanity’s problems can discuss the situation separately from those of us who think it’s in the top three.

I know it’s a bit weird to have people over in this corner glaring at the people over in that corner, but I suggest this is a far better situation than having people with wildly different views being corralled into the same corner. It’s not supposed to be an echo-chamber - even those of us who disagree with the whole COVID pantomime have differing views on why it’s gone wrong - but let’s try to keep it fact-based in here.

If it all turns to ratshit then maybe the mods can just lock the thread and we’ll accept that there is no discussion to be had. But let’s hope for the best.

To set the tone, a couple of observations on the situation in Sweden. Here’s an opinion letter in The Lancet in which the Swedish government is excoriated for letting people die en masse:

Over the last six months or so, the government has flirted with messaging similar to that deployed in Europe: 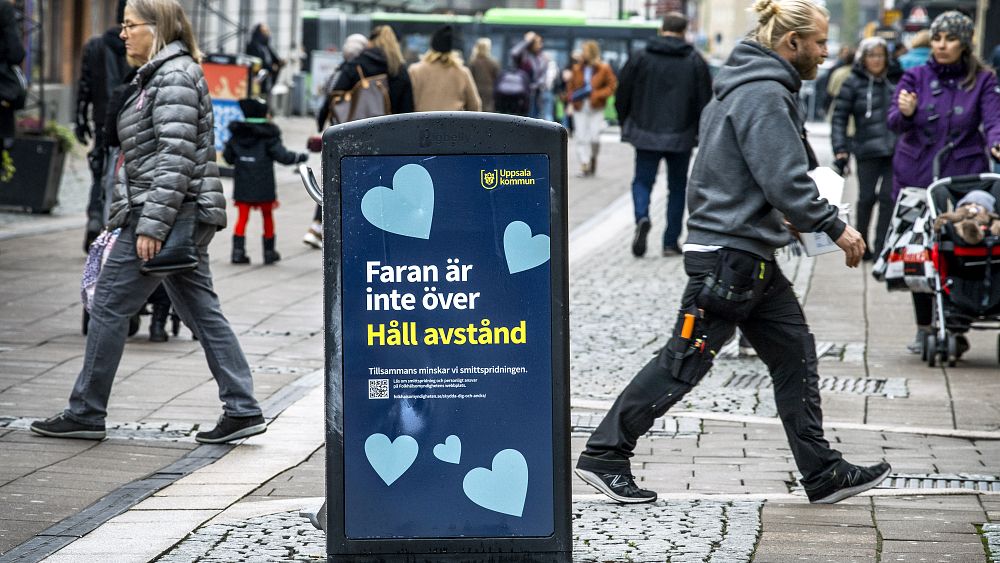 Officials have largely blamed the spike in instances of the virus on the spread of the UK variant.

But mostly Anders Tegnell has stuck to the spirit of the Law in that country and issued only “guidelines”. Notice that this article, in common with the global shift-of-focus, talks only of cases. The fact is that Swedish COVID deaths are at an all-time low, with 14,600 recorded in total.

The case against Sweden is that Norway and Finland - which took a harder line, and are still imposing various forms of lockdown - recorded only 800 and 960 deaths respectively, equivalent to ~1800 deaths scaled to Sweden’s population, or a death rate of ~160 per million compared to Sweden’s 1370. This result, supposedly, is entirely due to their ‘strictness’, despite the fact that Denmark acted similarly to Finland and Norway, yet had a COVID death rate noticeably higher (~440 per million).

There are several ways of looking at this:

And which narrative do you think is being pushed by the media?

As recorded elsewhere, the vast majority of Sweden’s deaths were in the elderly cohort, suggesting very few life-years lost:

Mortality in Norway and Sweden before and after the Covid-19 outbreak: a...

Objectives Norway and Sweden are similar countries regarding ethnicity, socioeconomics and health care. To combat Covid-19, Norway implemented extensive measures such as school closures and lock-downs, while Sweden has been criticised for relaxed...

So are the fearmongers right? Should Sweden have done what others did, closing businesses, limiting travel, and enforcing restrictions? They could have saved 10,000 lives - or perhaps 20-40,000 life-years (being generous; the statistics suggest less).

Swedes are famously public-spirited, so let’s say each life-year has a value of 50,000 euros (a typical actuarial figure). The Swedish public could reasonably have been expected to give up 1.5 billion euros of income to save those lives. If a lockdown cost less than that, and saved 10,000 lives, it would be worth it.

Unfortunately, that’s only 150 euros per Swede - about two days’ average salary. Perhaps a week-long lockdown would have been a fair trade for 10,000 elderly lives. But it probably wouldn’t have done any good.

Of course the whole argument hinges upon the possibility that saving those lives was even possible via the magic of lockdowns. To me, the fact that Sweden stands alone in maintaining a sensible State policy is a shocking indictment of the Western obsession with prolonging life for no apparent purpose.

Thank you. I may actually give these ideas a chance now. In the other threads, I was mostly scrolling past them as I am after news about developments in those places more than anything else.

I think you should be banned from this thread.

This thread won’t have any replies because everyone knows that Covid is super duper dangerous to everyone and everything and the only way out of this situation is to lock down.

My view is that lockdowns don’t work. I support masks on public transportation, in public buildings and at work because you NEED to go there. Outside of that, make your own decisions, but don’t control others because you are scared of covid, but you still want to eat at a restaurant.

Everyone should be offered the vaccine and everyone over 50 should be strongly encouraged to take a vaccine. If they don’t, that is their choice. They can live with the consequences, but they shouldn’t be banned from places because they chose not to have it. Surely they are only a danger to other people who chose not to take it?

Everyone should be offered the vaccine

Yes. Free. I’m still annoyed I had to pay for mine.

But they aren’t available are they . So it leaves you with the tricky problem of dealing with a lot of dead and sick people (dying and getting sick in big numbers all at the sane time ) if you don’t do anything in the meantime.

41 vendors tested positive in the market in Taipei today. That’s how infectious the virus is. A lot of them will be old, some could die. Just because they got infected at work. It’s not normal to die or get sick because you went to work. I feel bad for them.

Now imagine that replicated across the city if there weren’t controls in place…And those vendors infecting their elderly relatives. Chaos.

Without lockdown you will still have a lockdown…Nobody will go to the market…Insurance companies won’t issue policies…Disease spreads …Neighbours complain …and eventually it becomes…A restricted zone. A lockdown… or whatever is nom de jour.

Because that’s the way it goes.

I’ve lived in both places they couldn’t be more different.

This thread won’t have any replies because everyone knows that Covid is super duper dangerous to everyone and everything and the only way out of this situation is to lock down.

Well, I’m still hopeful. If (for example) anyone is able to demonstrate, with a carefully-reasoned argument and reference to research, that lockdowns saved lives, caused little harm, offered good value for money, and that they were a better choice than the alternatives, then that’s fine. What I don’t want to see here is yet another round of:

That stuff can stay in the main COVID threads, as far as I’m concerned.

I’m more interested in big-picture stuff here. Freedoms and values. The meaning of life and the decisions we make to save it or end it. The effective management of socialised medicine, or the lack thereof. The politics of pandemics and the granting of power to unelected elites. Etc.

It’s not normal to get infected and sick and potentially die from going to work.

It’s not normal to get infected and sick and potentially die from going to work.

You’ve been telling Finley to stop with his discussions in the main threads for months now but still followed him here. Is somebody missing somebody?

Stop filling the other threads with repetitive anti everything nonsense.

Then he makes a thread and says don’t debate the lockdown.

You’ve been telling Finley to stop with his discussions in the main threads for months now but still followed him here. Is somebody missing somebody?

Hey, this thread is welcome! It’s a worthwhile discussion to have. I just think it shouldn’t be interrupting every other COVID discussion.

You’re welcome to debate lockdowns as long as you’re not doing it with facile arguments like “It’s not normal to get infected and sick and potentially die from going to work”. I’ve extricated myself from the other threads precisely so you can continue with that to your heart’s content over there.

As you could see I enjoyed to debate the merits of this or that but it got to be very disruptive of the informative parts of those threads.

Well is it normal?

That’s a big picture question to me.

Personally I don’t think it is.

Will it be accepted by society ?
Should an employer ask their employees to go to work in that situation ?
Should vendors sign a waiver ?

Should customer be exposed ?

Yes, it is. People get sick and die all the time. A lot of road accident deaths occur during commuting and other work-related travel. Stress is a factor in heart disease and suicide, which is in turn often work-related. Work-related deaths (and “life-related” deaths) outweigh COVID deaths, in the working-age population, by a order of magnitude.

If you want to make this sort of argument, I expect something a lot more sophisticated.

Well is it normal?

That’s a big picture question to me.

Personally I don’t think it is.

Will it be accepted by society ?
Should an employer ask their employees to go to work in that situation ?
Should vendors sign a waiver ?

Should customer be exposed ?

The infection part less so, but it is normal for people to risk accidents and death every time they get in their vehicles to go to work, and that’s accepted.

Agreed.
So in that case they should put a sign up ‘enter at your own risk’. They should also be aware of the insurance implications. But the risk is very high for older workers…1% death rate for over 60s, rising to maybe 4% for over 75s.

So should older workers be told piss off it’s too dangerous for you ? (Somewhat what happens already in terms of mandatory retirement ).

Next question.
What about infecting customers ?
Is it normal for a business to potentially harm customers by serving them (yes McDonalds and cig vendors

I mean, the customers are choosing to go to the market. Do you think they haven’t heard of COVID?

There’s a duty then to inform members of the public to allow them to assess the risk.

Who will pay for the inevitable lawsuits ?

This is all theoretical because when the disease represents such a risk to an unvaccinated population their business will be close to zero anyway.