I am currently living in Taiwan and also employed by a local company who provides me an ARC at the moment. I also got salary from that company but lower than 160k, and I did not submitted my ARC copy neither financial statements of my Taiwanese income. Can it be a problem or they are just curious about the 160k+ part? Is it okay to apply with a foreign income while I have local income as well?

Not sure if I’m wrong, but it sounds like you might be a tax resident here and thus should report the EU income in Taiwan as well. In this case you would definitely be above the $160k required, but your tax rate here might be higher.

Thank you for your reply. My question was more like whether during the application it is relevant or not. As the description mentions: Previously or currently holding a position in a foreign state or in the ROC with a most recent monthly salary of at least NT$160,000. In my interpretation it means that they would like to know whether you had a position with the mentioned income (or over that) or not. I am curious if anyone applied with similar background.

BTW, the part you mentioned about combining the amount is interesting but I think you should have the 160k+ from a single source, right?

What do you guys think? Are those beneficial?

In my experience, yes. The Ministry of Science and Technology suggested that even for salary-based applicants they still wanted to assess technical skill.

Last week (before applied to gold card) I have submitted my ARC extension. Just got a call from NIA and they asked me to pick either Gold Card or ARC which is okay but they also said that if you have the gold card your company still has to apply for a work permit for you. Does that mean that the same procedure has to performed (same documents to be submitted, same forms to be filled, etc…) by the hiring company? They said the open work permit means that between jobs you can still live in Taiwan. Sounds strange for me… Any similar experience?

Got request for ‘Further documents such as academic research, journal paper, patent certificate, technology transfer agreement, and certificate of merit.’ apart from payslips

So today I have been consulting both with NIA - Employment Gold card representative (over the phone) and with my local representative (in person) and the conclusion is that actually the employment gold card is not so beneficial in all cases. If you already have a work ARC - that is the situation in my case - then in my opinion (also as suggested by NIA) you should not bother applying for the gold card since:

Of course the money considering the fact that its for 3 years in my opinion is not a big deal but the process is actually, as mentioned above - according to the explanation of NIA - more complicated in case of the ARC.

Off the record they also mentioned that after 5 years of residency (where each year you stayed in the country for more than 183 days) if you wish to apply for APRC the process might be more complicated and troublesome then in case of being on ARC for 5 years. Since the act is implemented a bit more than a year ago no GC holders ever applied for APRC so lawmakers haven`t provided any guidelines for such cases yet.

After knowing all these facts I think I am going to revoke my gold card application (its already passed 2 decision making departments) because after its accepted there is no way back they`re going to revoke your ARC.

Bottom line: If you are already in Taiwan + you hold an ARC (or you have a job offer before coming here with a work permit) you are suggested to to keep in that way and if you need to search for a new job you will have one year for it with the extensions.
If you`re outside of Taiwan and/or you are freelancer or self-employed or doing a research then Gold Card is a good choice (you will be however be enrolled to the NHI only after half year of continuous stay in the island so some kind of insurance is advisory).

Also I suggest to also consult with your local representative/NIA + NIA Head office first to make sure you will pick the most beneficial option for yourself. They`re very helpful.
I hope this helps, good luck everyone!

Good post. Just a couple of conflicting bits of information to address:

This doesn’t appear to be the case. The gold card includes a work permit and a visa - there’s no extra fee beyond what’s applied for in the portal in order to get to and work in Taiwan.

The NIA has previously provided on-record assurances that there’s no issue here.

This doesn’t appear to be the case. The gold card includes a work permit and a visa - there’s no extra fee beyond what’s applied for in the portal in order to get to and work in Taiwan.

You are right, I actually misunderstood it (its a 500 NTD cost non-work APRC`s I think).

The NIA has previously provided on-record assurances that there’s no issue here.

Yes you can still obtain the APRC and it is confirmed that GC period counts only the process is not official yet.

Lee Hsin-Yin at Focus Taiwan weighs in on how the Gold Card system is working: 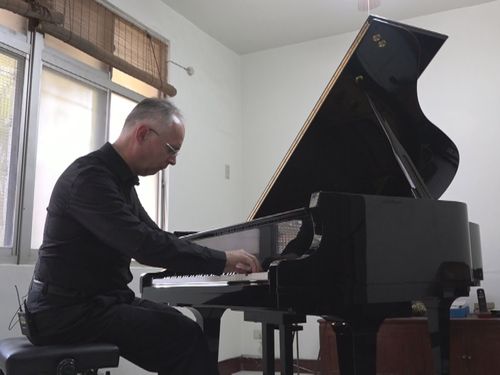 Anybody visiting Albert Muhlbock has no need for detailed directions. Just follow the music in his quiet neighborhood in Taichung, and you'll find him.

Well, since the card is really designed to bring folks INTO Taiwan, not keep them there if they already have a job, it makes sense that it might be better to hold onto your ARC instead.

Thanks for all your constructive help in understanding the Employment Gold Card. It has helped me greatly in obtaining one which I got last year.

I have actually spent a lot of time researching the tax incentive under Article 9 of the Act for the Recruitment and Employment of Foreign Professionals.

Long story short, there is an inconsistency between the Act and the Regulation issued by the National Tax Bureau on this topic. The Regulation (which you’ve helpfully provided a link to above) regulates the tax incentive available under the Act. Article 1 of the Regulation also explicitly says it has legal force because of the Act.

Article 3 has those three ticks you’ve mentioned above - but there is another way you can be eligible under Article 9 of the Act. Basically, under Article 9, if you have an Employment Gold Card, you qualify for the tax incentive under law.

The important part of Article 9 is “or has obtained an Employment Gold Card under the provisions of the previous Article”. I’ve copied and pasted the relevant text of Article 9 below (https://www.bli.gov.tw/en/0013225.html):

“Starting from the year in which this Act comes into effect, where a foreign special professional engages in professional work and meets specified conditions, does not have household registration within the State and has for the first time been approved to reside in the State for the purpose of work, or has obtained an Employment Gold Card under the provisions of the previous Article, and during the period of validity of the Employment Gold Card is employed to conduct professional work, then within three years starting from the tax year in which said person for the first time meets the conditions of residing in the State for a full 183 days of the year and having salary income of more than three million NT dollars, the part of said person’s salary income above three million NT dollars in each such tax year in which said person resides in the State for fully 183 days shall be halved in amount in the computation of total income for the assessment of individual income tax liability in that year, and the provisions of Article 12 Paragraph 1 Subparagraph 1 of the Income Basic Tax Act shall not apply.”

The National Tax Bureau and the National Development Council are aware there is a problem between what the NTB’s Regulation says and what the law under Article 9 says. I know they are aware as I’ve interacted with relevant parties on this topic. I doubt very much if anyone is looking to clarify or fix this - because there is no incentive to do so and because it involves different government departments.

Essentially, the only way to test this is to claim for the tax incentive if you have an Employment Gold Card when you do your tax return. I expect that the National Tax Bureau will challenge this and then, for those who can be bothered, you will enter a dispute with the National Tax Bureau. For some, this tax incentive will be a material amount of money. So I guess it’s up to those who want to pursue this to do so.

I hope this helps!

Anyone know if there is somewhere online to follow the progress of this?

I tried digging around on the LY website, but the page for the bill didn’t seem to have any schedule or anything.

Hey guys,
What is the process for getting a NHI (National Health Insurance) card once you get the Employment Gold Card ?
Can I apply by myself before having a work contract ?

As @fifieldt pointed out, I didn’t understand the post.

Did you check this site?

I think @autorelease may have been referring to progress in passing the New Economic Immigration Act. In which case, I’m not sure how to track it apart from in the news … but maybe there’s a website that lists the legislature schedule?

So far we only know that the bill has been sent to the legislature in November last year. Googling for 新經濟移民法草案 reveals that some kind of assessment report was released at the end March, which said positive things about the bill. My guess is that this was requested by the legislature (https://www.ly.gov.tw/Pages/Detail.aspx?nodeid=5249&pid=181554 ) and that the bill will now go back in for a reading.

For those who can read Chinese:

You may have to copy and paste the link into your browser, not sure why it’s not “clickable”.

Not much detail though it appears it is still in committee…

Anyone know if there is somewhere online to follow the progress of this?

If you use facebook, you could pose this question on the Forward Taiwan page. Those guys seem to know a great deal about these sorts of legal developments. If you find anything out, please let us know.

Not much detail though it appears it is still in committee…

Am I reading this correctly that it’s been proposed for discussion 5 times and 5 times sent to committee? Is that a normal number of times for that to happen?