The futuristic ghost town of Sanzhi (how do I get there?)

I want to see the futuristic ghost town of Sanzhi. I’m a tourist and pretty new to Taiwan. What would be the easiest way to get to Sanzhi? Maybe taking the MRT to Danshui and then by train or bus? What’s the city, town, bus stop or train station closest to Sanzhi?

It would be cool if anyone could post some directions for me.

more information on and photos of the ghost town:
urbanatrophy.com/forum/showthread.php?t=480

Do you mean the haunted space village?

Correct me if I’m wrong, but didn’t they tear it down this past January?

I’m pretty sure they tore these down, sorry to say.

Here is a thread about them that confirms the demolition: Bye bye mushroom houses

Yes. Those awful eyesores are gone. Now, you can see the beautiful ocean as you drive along the coastline. :bravo:

Those awful eyesores are gone. Now, you can see the beautiful ocean as you drive along the coastline. :bravo:

Until they build the new eyesores…

The only way to get there now is via the bus from Danshui to Sanzhi, and then the time machine back a few years.

Isn’t there a set of the same ghostly buildings next to the Howard Hotel in Green Bay?

Isn’t there a set of the same ghostly buildings next to the Howard Hotel in Green Bay?

Those were also slated for demolition, though I haven’t been up there in a while and couldn’t tell you if they are down yet. Anyway, those were not IMO worth a special trip to see. If you were up on that stretch of the coast anyway, yes. 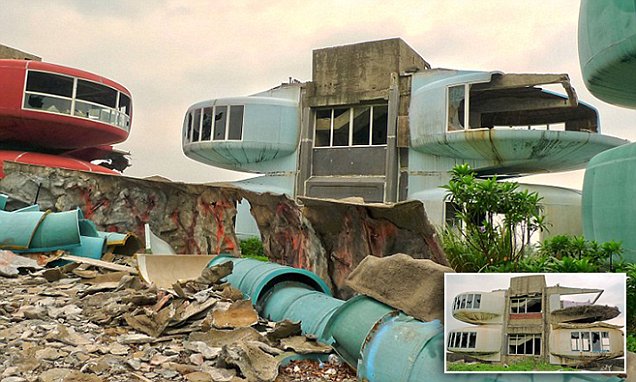 A bizarre UFO shaped holiday home resort in Taiwan which is tied to a number of mysterious deaths has become the centre of sinister conspiracy theories and a dark tourism attraction.

so whats become of the place, what is it now ? Apt complexes or just vacant ground?

By the way, the UFO/pod neighborhood in Wanli still exists; I was there just last month. In fact, a few of the places are still inhabited, although the vast majority are empty. It’s a fascinating place (for those of us who enjoy such things); who knows how long it will last, though.

There is a similar looking green spaceship on a side street off of Anhe lu. Looks like someone moved it from somewhere. Within eyeshot of Carnegie’s.

And no, you don’t have to be drunk to see it.

So in land hungry Taiwan , nobody is actually building something on that site? They didn’t make it into a nature park or something? If not build more buildings?