Hamas to Omar: Get Off Our Team!

We wrote here and here about Ilhan Omar's latest outrage: tweeting that the United States, Israel, Afghanistan, Hamas and the Taliban have all been guilty of 'unthinkable atrocities.' All on a par, apparently. Hamas, though, didn't like being lumped... 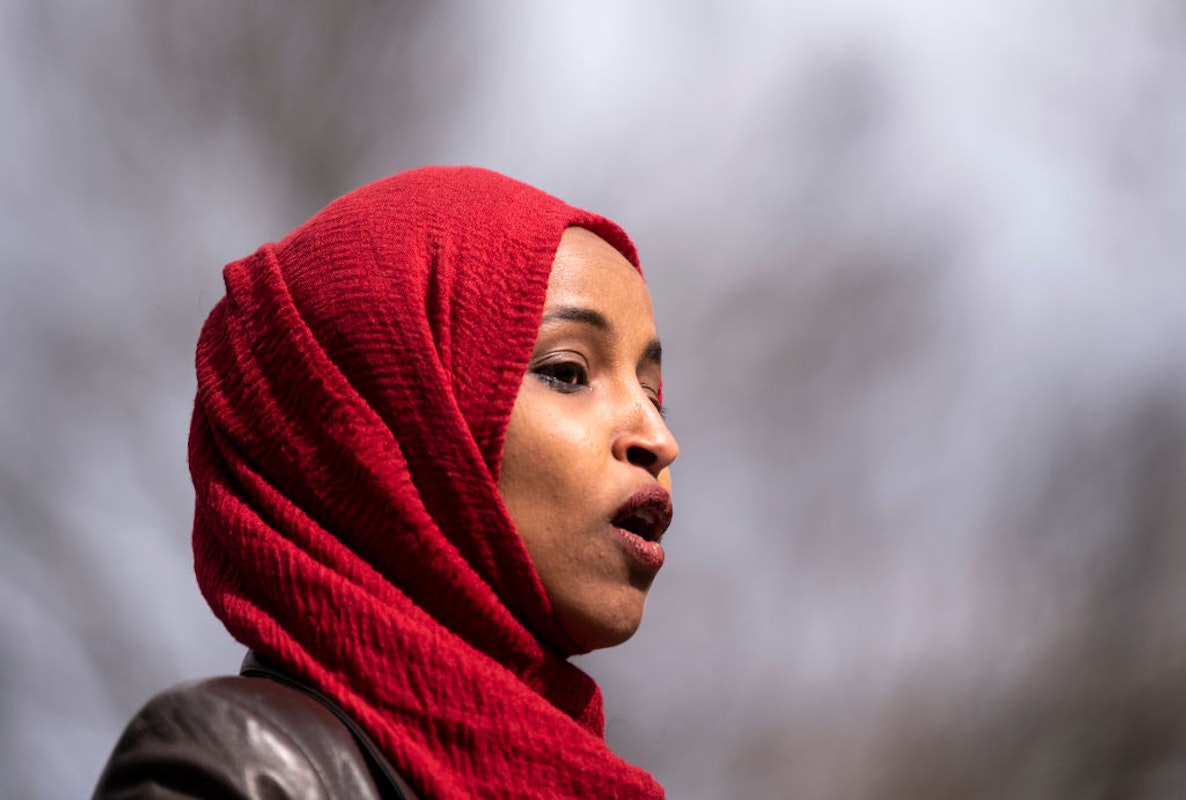 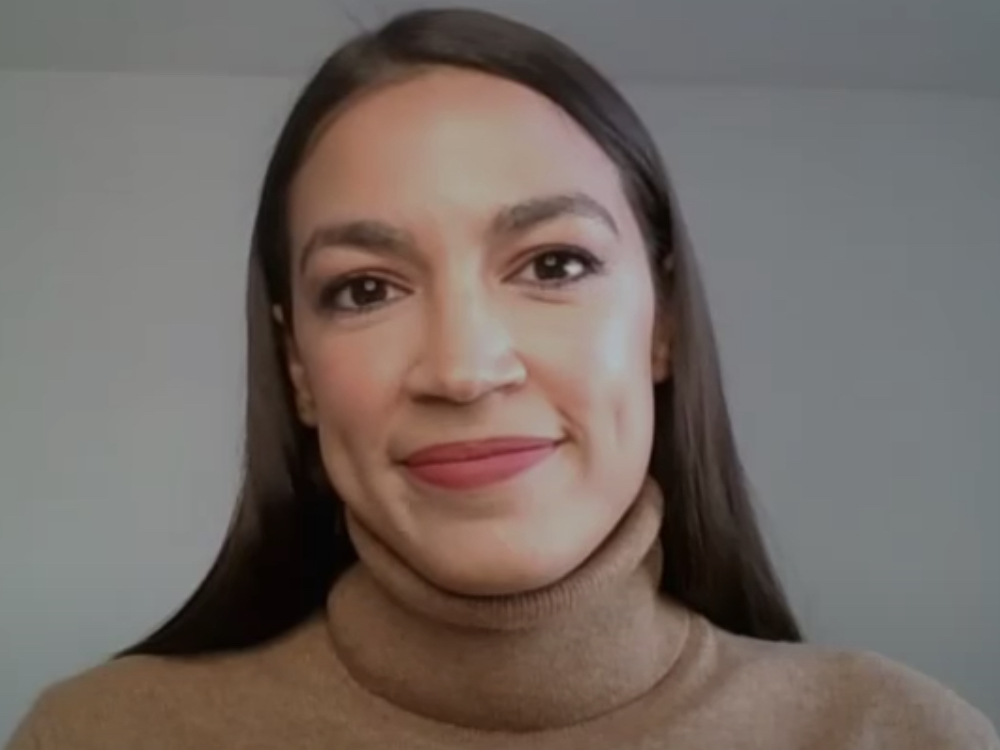 Rep. Alexandria Ocasio-Cortez called out top members of her own party during an interview on CNN Sunday morning for their "mischaracterization" of anti-war comments from Rep. Ilhan Omar, warning how "dangerous" it is to buy into such right wing...

“This whole hubbub started with right-wing news outlets taking what she said out of context,” Ocasio-Cortez said. “And when we feed into that, it adds legitimacy to a lot of this kind of right wing vitriol. It absolutely kind of increases that target. And as someone who has experienced that, you know, it’s very difficult to communicate the scale and how dangerous that is.”

Pretty funny. What was the context that will shed any light on “We must have the same level of accountability and justice for all victims of crimes against humanity. We have seen unthinkable atrocities committed by the U.S., Hamas, Israel, Afghanistan, and the Taliban”? Seems pretty explicitly clear.

It’s the identity as a shield thing. The other day some woman said I should listen to some other woman bc she was a black woman. So we should listen to Omar bc she’s Muslim? And it isn’t just listen…it’s agree or forever hold your racist, sexist, misogynist, white supremist peace.

Oh, most likely AOC was talking about some other comment.

Yes, when you criticize her you put her in danger, didn’t you know that?

Yes, when you criticize her you put her in danger, didn’t you know that?

I just rewatched some cop video where the woman says, as a woman, when you walked up to give me a ticket for texting while driving, I felt threatened and was gonna pepper spray you. The guy says, "I’ve been doing this for 21 years ma’am…never been pepper sprayed. lol

That’s about Pelosi’s speed. Eyes on the prize.

Pelosi walked gingerly because she has only a tiny House majority and relies on several hard-left members and dozens of very progressive ones. She doesn’t want to lose them, but she doesn’t want to endanger her more centrist members, either. Omar’s tweet put her between the dog and the hydrant. Jewish members issued an outraged statement denouncing the tweet, while Omar’s left-wing colleagues, including Alexandria Ocasio-Cortez, criticized Pelosi’s tepid request for clarification.

It’s time to remind Ilhan Omar that America is not like Hamas or the Taliban. It’s time to remind Mara Gay that the American flag does not mean “This is not your country.” It is time to remind kneeling athletes that our “The Star-Spangled Banner” is not the emblem of white supremacy. It is time to reject Ibram Kendi’s terrible idea that the answer to past discrimination is to apply reverse discrimination into a never-ending future. It is an indelible stain on our history that African Americans suffered centuries of slavery and seven decades of segregation on these shores. That cruelty should be taught in school without sugarcoating. So should the displacement of Native Americans by an expanding population of white settlers. But we should also teach that America ended chattel slavery with the costliest war in its history, and that, after the failure of Reconstruction, our country has made enormous racial progress over the past six decades. It is reasonable to debate laws that tighten voting rules in Georgia and Texas, but it is wildly distorted to call them “Jim Crow 2.0,” as President Biden himself has done. That demeans everyone who suffered through the reality of legalized segregation – and everyone who fought to end it.

Pretty funny. What was the context that will shed any light on “We must have the same level of accountability and justice for all victims of crimes against humanity. We have seen unthinkable atrocities committed by the U.S., Hamas, Israel, Afghanistan, and the Taliban”? Seems pretty explicitly clear.

What’s the issue with that? Doesn’t seem like that different a sentiment than “There are a lot of killers. You think our country’s so innocent?” (although the context of that one was a lot worse, imo).

Nothing IMO. I think that actually was the statement AOC was referring to though. 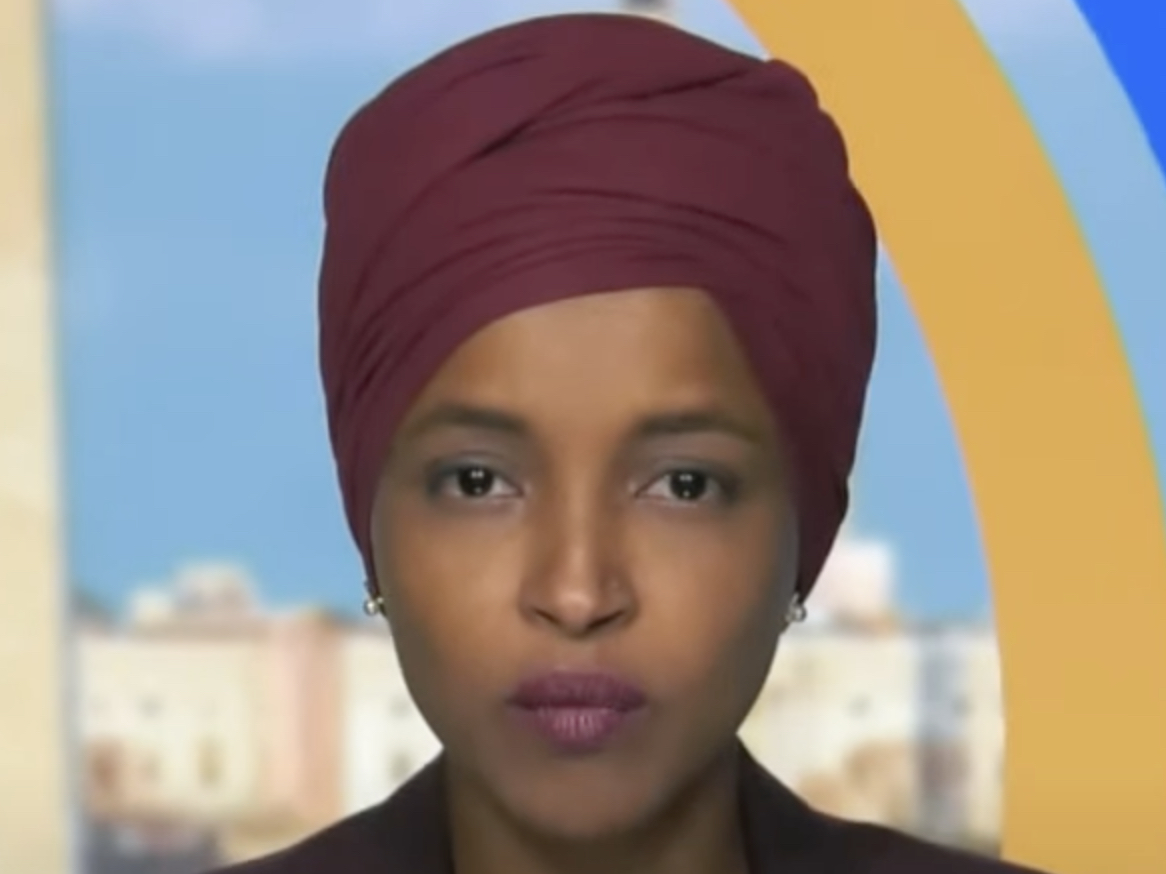 Rep. Ilhan Omar: My Story Is Not Unlike Migrants Trying To The Enter Country...

The Minnesota congresswoman discusses her efforts to institute a nationwide cancellation of residential rent and mortgage payments until the end of the COVID-19 pandemic.

The Minnesota congresswoman discusses her efforts to institute a nationwide cancellation of residential rent and mortgage payments until the end of the COVID-19 pandemic.

Ah, the War on COVID.
The new War on Drugs on Terror on White Supremacy on BLM on …meh, it’s just all the same thing, War on Capitalism.

“We’re “trying” to get money for landlords and…buy my book”. It’s an immigrant’s story.

What it really sounds like is a concerted effort to squeeze grandma and grandpa out of their retirement income to the point where Blackrock can swoop in to buy single family homes at firesale prices. 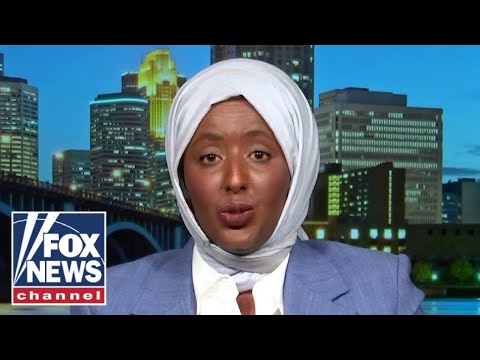 See seems like a good person. However she seems to be running as a Republican. See here Ilhan Omar won in 2020 by 64% to her and 25% to her closest rival (Republican) See here

Credit where it’s due: Omar got this one right. 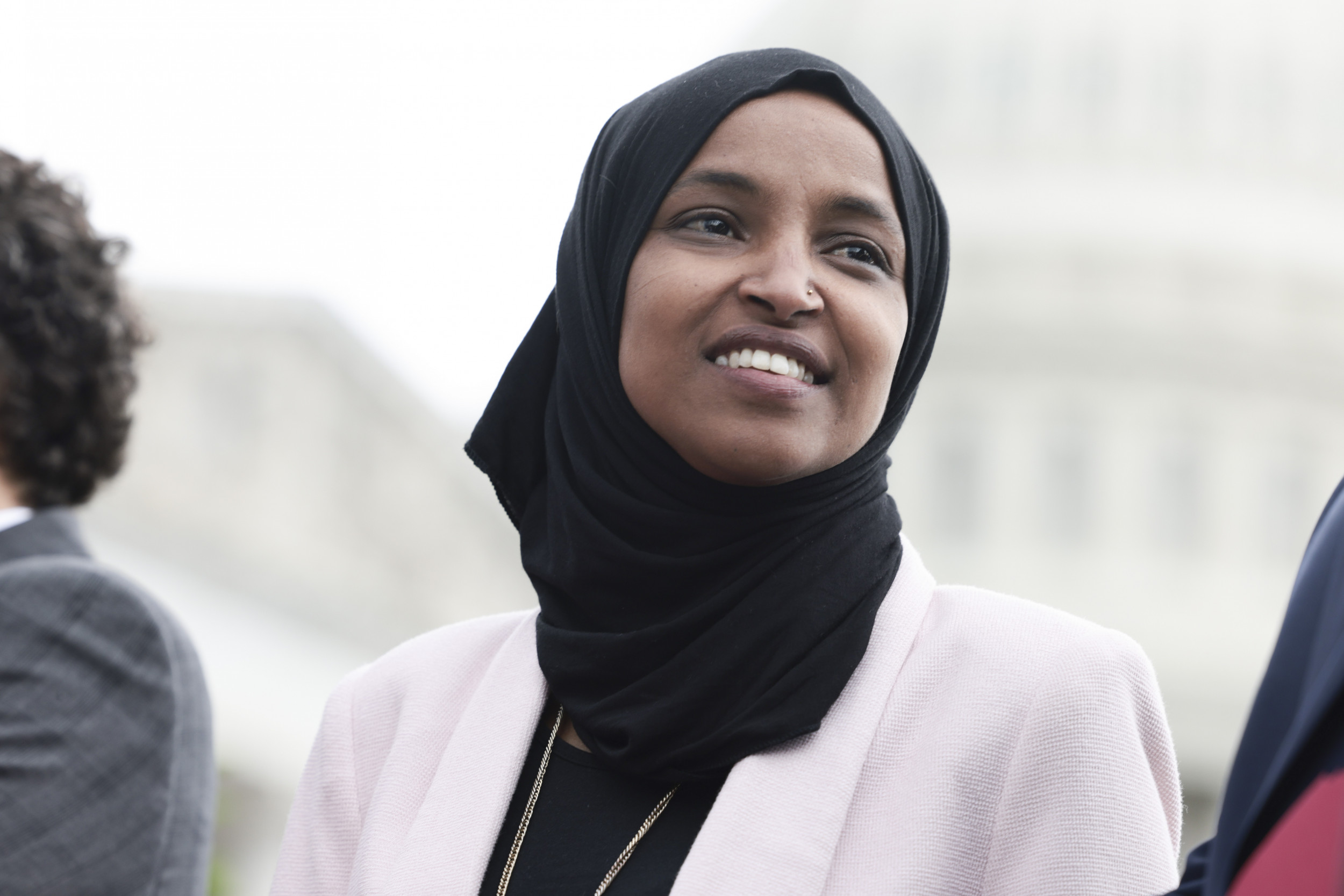 The progressive Democrat said media reporting about people who had given money to the Canadian truckers' protest could lead to harassment. 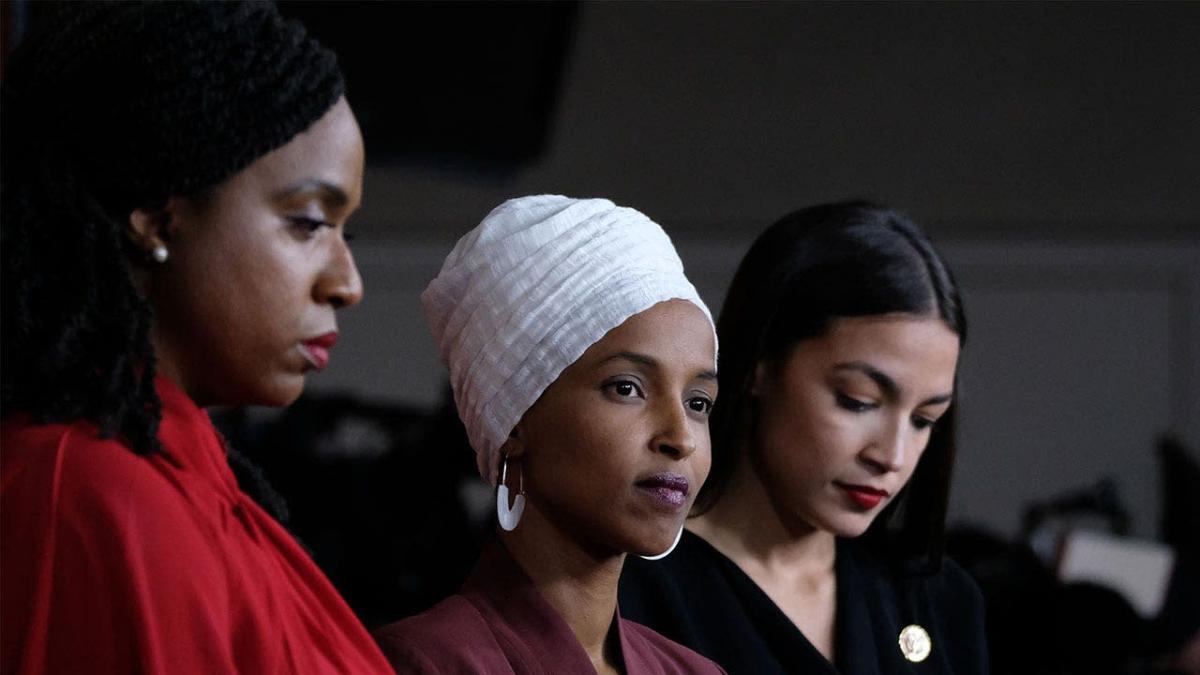 A consulting firm co-owned by Rep. Ilhan Omar's husband is raking in cash again after it had ostensibly shut its political doors following controversy over its payments from Omar's campaign.

A consulting firm co-owned by Rep. Ilhan Omar’s husband, Tim Mynett, appears to be back in business after ostensibly halting its political operations at the federal level following controversy stemming from Omar’s campaign shelling out millions to the company.

The Minnesota progressive’s campaign dished out nearly $3 million to Mynett’s firm, E Street Group, before criticism had forced her to terminate the contract in November 2020. Mynett and his business partner then appeared to veer away from their political operation to consult wine and beverage companies.

Mynett’s firm, however, appears to have reopened the doors to its political business after recently taking in cash from an Omar-linked committee.

Mynett and his business partner, Will Hailer, are still listed as governors of the E Street Group in its Washington, D.C. business records. Hailer also submitted a registration for ESTREETCO LLC in California in late October 2020, according to filings in the Golden State.

Mynett and Hailer, meanwhile, pivoted their efforts toward the wine and beverage industry after Omar had nixed the contract. The duo offered companies advertising, public relations and web services.

According to the D.C. business records, the trade name for that company, eStreet.co, was canceled in October 2021. The similarly named California limited liability company remains in good standing.

I sure hope all this transparency isn’t triggering to her or her husband.

She hasn’t been arrested for marrying her brother yet?

Not yet. I guess immigration fraud doesn’t to warrant attention. Color me not surprised. Still think it’s not true? Just like the laptop; if only someone gave a shit. 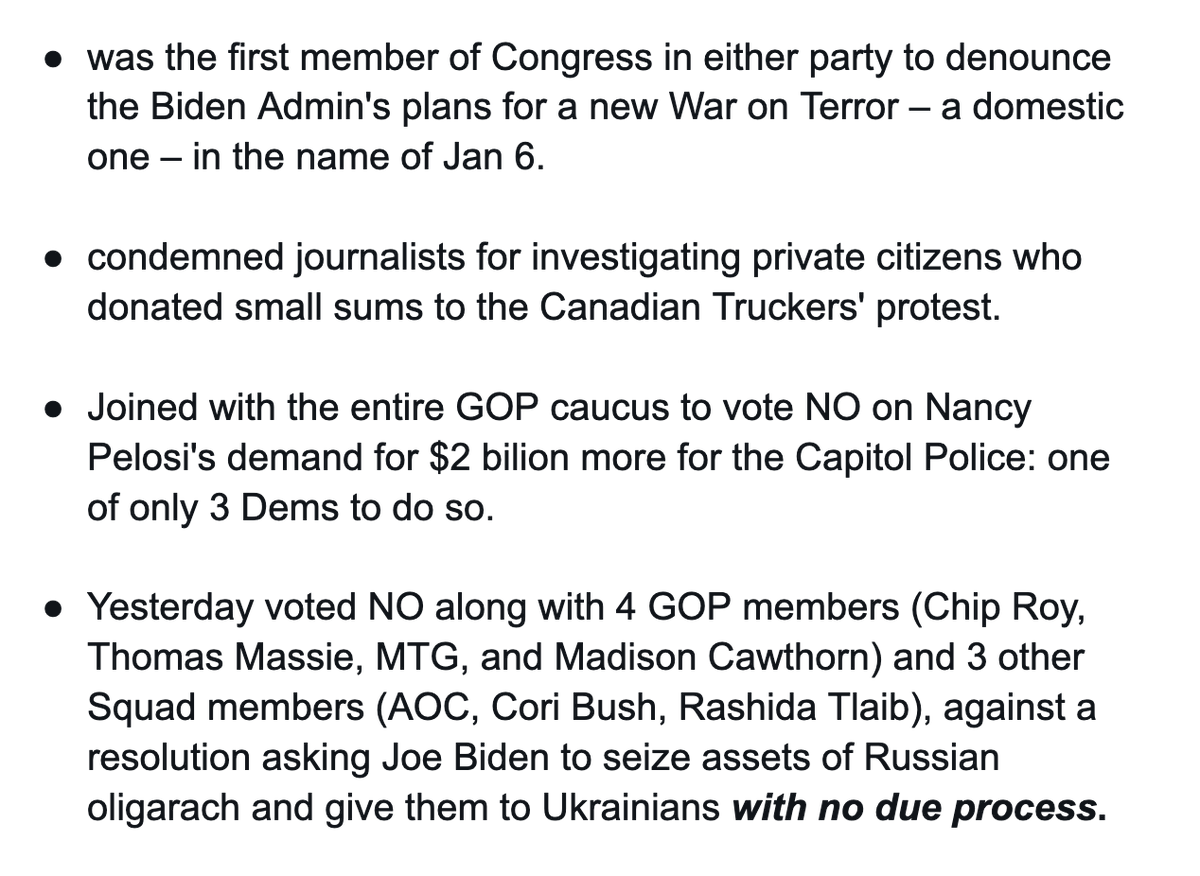 Passengers serenading their flight about Jesus would've been received differently if they were Muslims praying.

Of course right-wing Christians believe Christians should have special privileges denied to Muslims, Hindus, Buddhists, atheists etc. Can you imagine if if members of any other religions (or none) had asked the flight crew to hold a public ceremony on an ordinary commercial flight?
I’m sure if members of ISKCON had requested to start a loud public chant in the face of other passengers that would have been totally acceptable

It’s shocking how people will distort the truth just in order to attack others’, and this MSNBC gaslighting effort is just another example. I’ve been on many planes where Muslims have prayed and even where the prayers come in through the speaker system. I didn’t get offended or try to turn it into an attack on anyone. Why would I care that these people are praying?

But some Christians, after a depressing mission to help refugees in Ukraine, obtain permission to sing songs in multiples languages, and that is what needs to be attacked. The Singaporean probably didn’t even see what the big deal is…it is common to see Muslims, Hindus, or Christians praying publicly in Singapore. People don’t seem to be offended because someone else has different religious views than them.

Having said all that, I’m definitely with that plaid guy…I’d prefer that if people are going to pray on a plane that it happens quietly and without a musical instrument. I imagine that how I’d react would mainly depend on my mood, but I hope that I wouldn’t be as much of a lying scumbag as Omar.