A thread for a particular category of narrative fail…

[quote]Kaddie Abdul, “an IT data engineer working in Silicon Valley,” decided to drive four hours to a Trump rally in Nevada to show how racist “those people” are. She wore her Muslim garb, held her Koran, and waited for someone to attack her. No one did. A few people gave her an odd look, but nary a nibble.

When is it tokenism, and when it is not?

[quote]The one who made a point Thursday of standing side-by-side with a white congressman (Trey Gowdy) an African-American senator (Tim Scott) and an Indian-American governor (Nikki Haley) to offer a portrait of what the GOP could look like.

“The great thing about our party is we have this great new generation of leaders ready to take the mantle,” the Cuban-American Rubio said at a rally held at Swamp Rabbit CrossFit, a gym in Greenville, the heart of South Carolina’s conservative upstate. “We are prepared to turn the page and move forward.”

“Take a picture of this,” Haley encouraged attendees, who promptly raised their cell-phone cameras. “Because this new group of conservatives taking over America looks like a Benetton commercial.”[/quote]

Move forward? Whatever direction you happen to be facing can be designated as forward. Great new generation? That’s ageist. Vote Republican to prove you’re not a racist. Or something. Oh, and… is Darko a racial slur?

It seems Rubio has stolen the progressive movement’s mojo. That explains why the Dem candidates are all honkies. But race pandering is old hat. The former party of Hope and Change has moved on to gender pandering - which they are attempting with more ardor than skill.

Seriously rowland, you will not pass your next Turring Test writing like that.

As disgusting and dangerous as false accusations of rape, or SWATting:

[quote]Several students who falsely claimed they were the victims of a race-based attack at the hands of a dozen white people will be charged, most likely with filing a false report.

The three students at the State University of New York at Albany claimed they were attacked by a dozen white people while riding on a bus in January. The alleged attack quickly caught the attention of Black Lives Matter activists, the school’s president and even presidential candidate Hillary Clinton, all of whom condemned the attack before any evidence was provided.[/quote]

No propellers on top.

[quote]Daniels said he was “inundated” with requests for the Trump yarmulkes from conference-goers and sold out almost immediately.

“I totally underestimated the degree of support that Jewish people who are attending this event have for Trump,” said Daniels, who runs an online yarmulke shop called Marc’s Garden Jubilee. “I probably had about 50 inquiries for Trump yarmulkes that I could not fulfill.”

Daniels said he sold two or three Ted Cruz yarmulkes and three or four for John Kasich. By 8 p.m. on Monday, the vendor said he only had Hillary Clinton and Bernie Sanders caps left over, and was finding those tougher to unload.[/quote]

Despite the media’s framing of this as a terrorist attack, we are very clear that this terror is completely homegrown, born from the anti-Black white supremacy, patriarchy and homophobia of the conservative right and of those who would use religious extremism as a weapon to gain power for the few and take power from the rest. Those who seek to profit from our deaths hope we will forget who our real enemy is, and blame Muslim communities instead.

[quote]Black Lives Matter activists published the location of a Black Trump supporter online Tuesday after discovering him at his place of business.

The incident began after Manuel was seen by Twitter user @Dirty_Tan, who promptly began filming and offering to sell the young conservative’s work address to others.

Followers of @Dirty_Tan immediately responded by issuing threats toward Manuel while openly posting the name and address of his work.[/quote]

The update was labelled with a correction, stating: “The headline has been changed to better reflect the origins of the Frozen meme.”

An apology of sorts. Sometimes it pays to call them out.

Is CNN implying that blacks are more criminal?

Not someone you necessarily want an endorsement from, but… 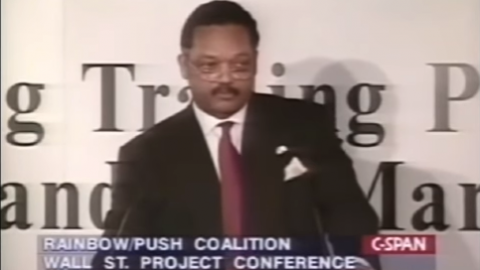 A YouTube video surfaced earlier this year revealing clips from 1998 and 1999 of Rev. Jesse Jackson praising Donald Trump on two separate occasions for his "commitment" to diversity. Jackson,...

The data are in, and…

You Are Still Crying Wolf

Go away, pro-Trump bots [Update 5/30: I originally took this post down because it got picked up by some pro-Trump accounts that I think were bots which would post it several times a day to various …

I stick to my thesis from October 2015. There is no evidence that Donald Trump is more racist than any past Republican candidate (or any other 70 year old white guy, for that matter). All this stuff about how he’s “the candidate of the KKK” and “the vanguard of a new white supremacist movement” is made up. Trump got more votes from people of color than Romney did. Here’s the data.

"Racial resentment" may be too simple to explain this complicated picture.

This is going to be hard for certain people to accept. If your entire self image and self worth depended on you believing that you had just cause to beat up Trump supporters, then this means you really were wrong all along, and that there’s no excuse for your hatred at all. You’re the ones who are evil.

BET founder, after meeting with Trump, says black Americans should give...

They’re cowering in the bunkers beneath Oberlin…

No man is an island, but some people belong to different continents. And still others seem to live in a parallel universe.

Voters Say Trump Better for Blacks Than Obama, But More Is Needed - Rasmussen...

With unemployment for black Americans at an historic low, voters continue to believe President Trump has been better for young blacks than President Obama. But voters also still feel the government could do more and don’t think Trump’s rotten...

Black voters would get a lot more if they let the GOP know they can win their votes. Their votes are obsolete since the Democrats don’t have much competition. Neither party will do anything for them if they just blindly vote Democrat.

Numerous Democrats appeared to not celebrate a fourth-grade black girl who received a scholarship on Tuesday night from President Donald Trump during the State of the Union Address. “The next step forward in building an inclusive society is making...

Things they shouldn’t need the FBI to figure out for them:

NASCAR said Tuesday what looked like a noose that was found in the Talladega Superspeedway garage stall of Bubba Wallace, was a garage door pull rope and had been there since the fall, according to an FBI report.

Is this entire thread a conversation that Rowland has with himself? Can we not just lump all these into a catch all “narratives” thread?