The lamest thing about hockey is all the fights

I came across this story this morning.

[quote]As a rookie defenseman for the Whitby Dunlops, a storied amateur hockey team in this Toronto suburb, Donald Sanderson impressed his teammates as a passionate and intense competitor. . .

Sanderson died Jan. 2 of injuries he sustained when he hit his head after falling to the ice during a fight Dec. 12. He was in a coma for three weeks. It was his fourth fight in 11 games with the Dunlops, a highly competitive amateur team of players 21 and older. Although in many ways, the accident appeared to be a fluke — Sanderson’s helmet became dislodged during the scuffle and the players fell to the ice together — his death has led to headlines across Canada and revived a longstanding debate over what role, if any, fighting should play in hockey. . . [/quote]
nytimes.com/2009/01/20/sport … ml?_r=1&em

The story mentions that different leagues have different rules about fighting and it claims fighting is uncommon in certain realms of the sport, but that’s all BS. Everyone knows fighting is a major part of the sport. I have always thought that’s too bad.

It’s not that I’m worried about potential deaths and serious injuries. Not at all. And I don’t think I’m being a weenie. I just learned in the sports that I’ve done over the years, that a good athlete in whatever sport will excel at the the sport, seek to win, but comply with the rules and be a good sport. The goal is to show fitness, prowess, technical mastery and to win, but not to hurt or demean others.

I’ve only played ice hockey a few times (on a pond as a kid), but I would think a great hockey player would excel at skating well and fast, handling the puck well and scoring goals. That kind of stuff. And the player who is always getting in fights, in my mind, should be seen as a loser, a failure, a poor sport, and should be scorned by the crowd and seriously reprimanded, disciplined and eventually thrown off the team by the coach.

Incidentally, I was a wrestler for many years and in wrestling the rules, ethics and goodsportsmanship are held in extremely high regard. The kind of crap that goes on in hockey (and basketball to a lesser extent) would not be tolerated at all – by fans, teammates, coaches or refs. I don’t know why it’s different in hockey – why such losers are so widely tolerated, but it’s too bad as it tarnishes what could otherwise be a great sport.

I had the same experience of boxing as you have had of wrestling. This kind of ‘carry-on’ wouldn’t be tolerated or respected for a minute. I’m not sure how they started down the road that ripping helmets off and punching a random guy in the face was an integral part of hitting a puck around on ice.

Remember, unlike other contact sports, in hockey you carry a potentially lethal weapon. A lot of players abuse that. A good drubbing can be educational in that regard. But that’s not the real reason for the fighting.

Contrary to popular perception, fighting is only common in hockey in feeder leagues, where players are looking to impress and get a shot at the big show, and semi-pro leagues where any number of otherwise unskilled men are looking to hang on to a job. That’s where competition is the most fierce, and in a sport with so many sudden, close, hard-fought battles for possession, intimidation is a major advantage if it gives even a half-stride advantage.

A player who intimidates the opposition enough to make them take an extra look before charging into the corner, or challenging a lightweight skilled teammate, is an asset, not a loser. Better if that intimidation comes from a hard body check, as is most often the case, but where careers are on the line, guys will go all the way.

Although you state that it is common in feeder leagues (whatever those are), it’s still illegal to engage in fistfights, isn’t it? So, basically you’re saying that those who do so are cheating because they feel intense pressure, right?

Well, I stand by my initial position. Athletes feel lots of pressure in plenty of sports but most don’t see that as an excuse to therefore cheat to gain a supposed advantage. In most sports cheating is cheating. It’s what losers do because they’re not good enough to win honestly by the rules.

Like headhoncho, I still don’t know why hockey went down that path, that cheating and badsportsmanship are widely tolerated, accepted and even – undoubtedly – appreciated by many and seen as the highlights of the game. Weird.

I have played in many team semi-contact sports (on the same par as ice hockey ) and one which is similar to hockey with a wooden stick and no protective gear, helmets are optional. It was common to get bruises and lacerations from the stick and knocked around by the other players but very rare to actually see an all out fist fight. If there are any in the senior leagues they will be sent off and banned for a few games. I think it’s just seen as entertainment for ice hockey fans. In fact I knew one usually very nice and peaceful Canadian teacher who was also a big time hockey player here who got hit by another scooter/motorcycle on his motorcycle. He ripped the guys helmet up and punched him (according to him). Now that could get you jail time in the real world, lucky for him he seemed to have got away with it in this case (I have been threatened with calling the police and prosecution for even swearing at people here).

No, it’s not really cheating. It’s an accepted part of the game in many leagues (not the CIHL), but one that comes with penalties. If it were really ‘cheating’ it’d be entirely out of bounds (like adding pawns to a chess board when your opponent isn’t looking).

There aren’t all that many ways to ‘cheat’ in hockey. You can try to get away with stuff, but that’s usually just a part of the game. A goaltender could use extra large equipment, or a player could use a stick with an illegal curve, or an attacking player might interfere with the goaltender to get a goal: that’s cheating. It’s sufficiently outside the norms that in the first two cases, there’s a penalty and the offending equipment is thrown out; in the last, if there’s a goal it’s called off as if it never happened.

But fighting, tripping, roughing… all penalties… those aren’t cheating. It’s pushing the limits, sure, and usually penalized, but its a part of the game, not cheating.

Think of it in terms of golf: you can try to push the limits and shave margins to beat the course, and if you go too far and your ball lands in the water or out of bounds, you’re penalized; but that’s part of the game, you’re not accused of cheating. Cheating would be kicking your ball to get a better line, or using an illegal ball, or some such. And bad sportsmanship would be refusing to shake hands or share a beer afterwards.

Many of the best – most competitive, guys you want to play with, and against – hockey players are guys who would cut your heart out to win on the ice, then bend over backwards to help you out an hour later off the ice.

[quote=“Mother Theresa”]Although you state that it is common in feeder leagues (whatever those are) [color=#0000FF](those are minor leagues… training and proving grounds)[/color], it’s still illegal to engage in fistfights, isn’t it? So, basically you’re saying that those who do so are cheating because they feel intense pressure, right?[/quote]No, intimidation is a strategic part of the game. In many hockey leagues, particularly the most competitive of them, fighting is accepted as a means of intimidating the opposition, albeit one that comes with a cost. And yes, it’s also entertaining.

I think it’s just a way to show, look we are tough guys , even though we are skating around on ice hitting a little puck wearing two tonnes of clothes and a big assed helmet and gloves and therefore it’s a sport worth watching for the ‘red blooded males’, like American football for example. But mainly it’s for the TV ratings for North American macho crap…entertainment…money. Intimidation is part of every sport but it’s usually not glorified or openly accepted beyond the odd punch in the ribs, rough shouldering, hacking tackles etc.

I have played in many team semi-contact sports (on the same par as ice hockey ) and one which is similar to hockey with a wooden stick and no protective gear, helmets are optional.

Lacrosse? That’s a great sport and it can be brutal too. 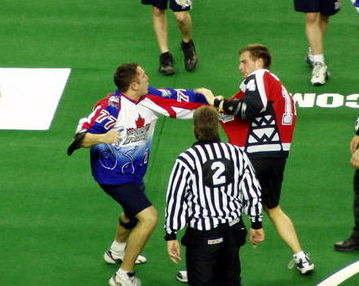 Maybe that’s the answer. Boys will be boys. Get them together for intense competition with all of them carrying a bunch of sticks and it’s inevitable they’ll eventually start wailing on each other.

If these guys weren’t fighting on the rink, they’d be fighting somewhere else.
Or they’d have to start some pillaging raids over Oshawa way…