There are no saints: Nelson Mandela edition

Gandhi has been beaten up in multiple threads here for failing to live up to a standard of saintly perfection. The guy was human. He had flaws. But this is worse:

What a lost prison manuscript reveals about the real Nelson Mandela | The...

New light is shed on the president's politics, smoothed over in 'Long Walk to Freedom'

(Mods: feel free to merge this in with a Gandhi thread or two, because there are bound to be others.)

I’m surprised it’s taken this long for the cult of St. Mandela to unravel.

The guy was a commie sleaze, it’s been known forever.

There’s just one of him?

Zero of him, at this point.

I do think he went overboard on Teresa.

The thread title reminded me of this classic example of the importance of the Oxford comma: 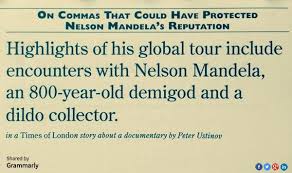 I have a question : WTF is dialectical materialism?

Some sort of commie thing.

The African obsession with communism never ceases to amaze me. A dozen African countries have experimented with it (with varying degrees of abject failure) and yet they still don’t seem to have realised it doesn’t work. My theory is that Communism is just a wonderful vehicle for corruption, and since a corrupt government is the preferred form of government in that benighted continent, it just fits nicely with all their other ideals.

If you think Mandela was shady, then you should really dig into some of the messed up shit Mother Teresa did. That would be an epic thread for this kind of theme. That’s all I’ll say.