I heard a plane crashed any news?

The plane had just taken off from Taipei Songshan Airport and was headed to Kinmen Airport in the outlying county just off the coast of southeastern China.

Initial cable TV news reports said 53 passengers were on board of the ill-fated flight.

The Taipei fire department has sent vehicles and speedboats to the scene to help with rescue efforts.

TV news reports said around a dozen people on the plane were rescued and sent to a nearby hospital and another 10 or so were still trapped in the aircraft.

airport in the middle of a densely populated city seems like a good idea only when you believe shit like this would never happen.

People still inside plane/river. Terrible. Hope they will get out safely.

Oh God, what awful pics. Poor folks must have been terrified. Thanks for posting.

so far 2 confirmed dead. One taxi was clipped on the overpass (you can actually see it on the photo that I’ve posted).

Hardly a controlled landing. Looks like an amazing escape for anyone pulled alive from that.
A 2nd reason in a year not to take internal flights here.

Is there any theory about why it crashed?

The plane is of the same model (ATR 72 600, and owned by the same airline) as the one that crashed at Penghu last year.

I think the crew performed heroically. According to witnesses, the plane did not seem to have enough power to pull up, and after managing to dodge a building, it clipped the overpass. Had the plane hit the building, things would have been a lot worse.

the taxi driver and his passenger were ok, same can’t be said about his taxi cab.

That’s great about the taxi driver. I was thinking the same, hansioux. In a city like Taipei with so many tall buildings crammed together, it was ‘lucky’ that they managed to land in the river.

Guess it was trying to get back to the airport, but couldn’t make it.

Guess it was trying to get back to the airport, but couldn’t make it.

So it didn’t have enough “power” or something…? O_o

[quote=“hannes”]Guess it was trying to get back to the airport, but couldn’t make it.

So it didn’t have enough “power” or something…? O_o[/quote]

Now they say, the plane had trouble to gain height and clipped a bridge because of that.

there were 53 people aboard, including 5 crew members and 2 children. 20 of them are Chinese tourists. So far 22 people were rescued, 4 of them didn’t make it. 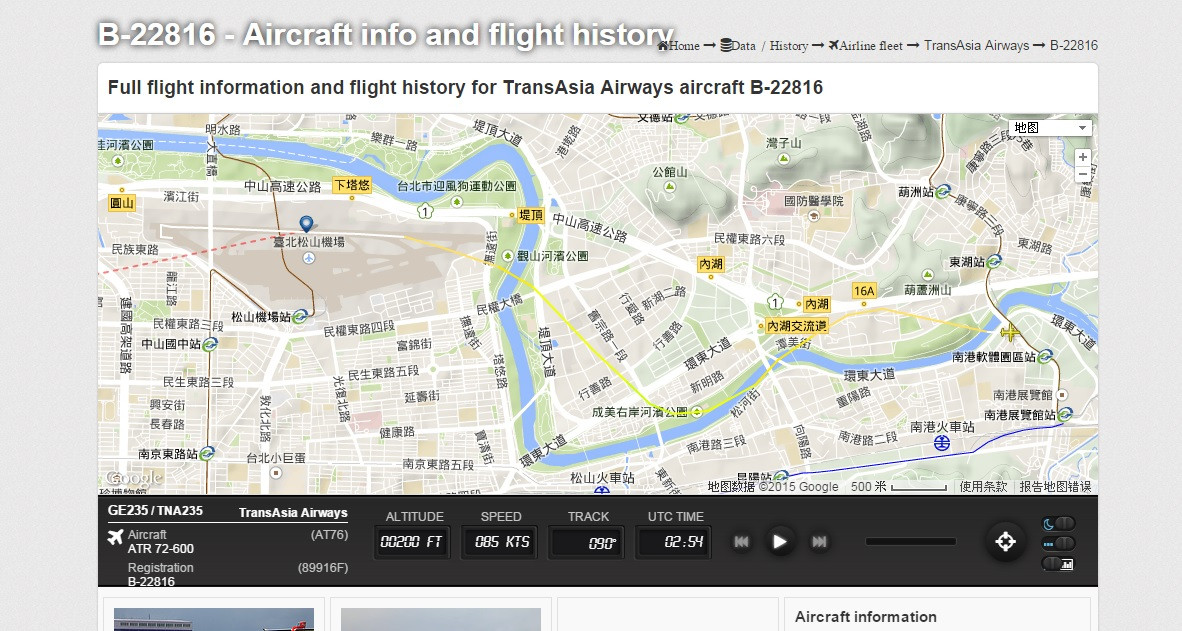 The pilot doing his best to fly along the river.

Does the plane on that map mark the crash site?

If you want to follow this further try here

These guys are plane geeks and pilots. They believe that from looking at the pictures it appears that Engine # 1 (the left one) failed.

Dropped out of control. Very lucky not to hit those buildings or the bridge.