Any thoughts, opinions, feelings etc on this?

I’d support other countries to try.

From news about 3/4 countries have tried or are trying at the moment.

From news about 3/4 countries have tried or are trying at the moment.

Which countries. I remember some have tried on a small localized scale. But nothing on the national level.

Are there any serious alternatives?

Think about it: there is too little work for everyone, and it’s getting rapidly less due to automation. Imagine a nation where a lot of products (services) are produced (provided), the companies offering them make good money, but almost no jobs are available so that few people are employed… how should the citizens of that nation make a living?

One obvious solution to me is that the people (who are the nation!) simply decide to tax the companies for the opportunity to do business in their nation, and then share the tax revenue amongst each other. Bang! Universal basic income.

I’m interested in all possible solutions. After all I’m just a small engineer, and might not have the best grasp of how things “really are”.

Oh yeah, another option would be abolishing money a la Star trek.

money for nothing? not sure about that being a good thing.

a problem i do think that needs solving is the housing prices though.
the cost of a house and the time in your life you will spend paying it off just doesn’t equal the value the house. totally imbalanced. its especially weird here to see new luxury apartments going up every day but the shitty old apartments still cost a bomb.

It’s inevitable sometime in the future. And the timing varies by location even internal to countries, certain areas will need it before other areas.

I’m a clown. Nice to meet you.

It’s a complex topic, and the examples that usually get cited were/are nothing close to universal.

Some jurisdictions have universal-for-senior-citizens income, separate from employment-based pensions, but the ones that come to mind are small, more of a bonus than a livable (“basic”) income.

And some jurisdictions have almost universal payouts to residents, excluding some on the basis of criminal convictions or time spent abroad.

The Permanent Fund Dividend (PFD) is a dividend paid to Alaska residents that have lived within the state for a full calendar year (January 1 – December 31), and intend to remain an Alaska resident indefinitely. This means if residency is taken on January 2, the " radicalizing idea to allow Americans to have little money with the PFD for a dividend year when:

Canada’s HST credit is sometimes viewed in these terms. It goes together with different credits in the provinces, and basically they vary depending on the taxpayer’s income, but it’s always a very small amount (like a few hundred dollars per year). These are “refundable” tax credits i.e. you get the money even if you pay no tax. Of course, you don’t get it if you don’t file a tax return.

Macau also has (or had?) something similar to Alaska’s dividend.

I’m a clown. Nice to meet you.

nice to meet you.

Admittedly there currently are more Clowns* in positions of power (Trump, Johnson, Kim, Han, …) than there are Pirates: I can only think of Zdeněk Hřib, the Mayor of Prague - who happens to have been an exchange student in Taiwan, and after assuming office refused to expel the Taiwan embassador at a diplomatic meeting, even though the Chinese embassador insisted to do so.

Anyway, what I referred to was the Pirate Party movement. Several of these parties support the idea of universal income.

In Taiwan unfortunately the formation of a Pirate Party was forbidden, and some of the reporting on Pirates in the “news” was entertaining at best: 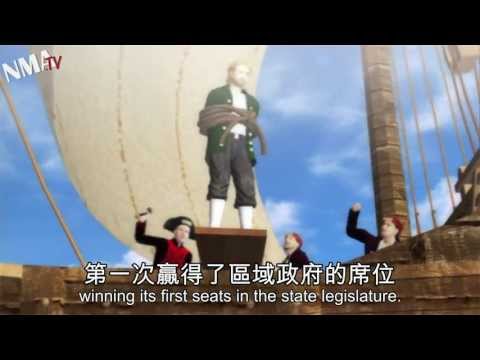 Currently I work in AI with neural networks, and I’m telling you, automation is coming. If you have a repetitive job that demands consistency, even if it involves human interaction, AI’s coming for your job.

It is the next industrial revolution, and UBI seems perfectly suited to put more emphasis on human value.

Oh yeah, another option would be abolishing money a la Star trek.

I’ve been pondering on this one. I don’t think you could abolish money entirely, but I have a half-baked idea that people could accumulate Karma. Everyone would carry a logging device that simply records what they’ve done for others, and what others have done for them. It’d be a sort of mathematical representation of your life history. People could choose whether to give you stuff (or do stuff for you) on the basis of whether you’ve given stuff to others in the past.

I think it would not work with (say) houses or corporate acquisitions, but I’m pretty sure it’s doable for everyday transactions. I suspect it would work best for services (say, gardening or babysitting) rather than goods.

The taxman would have an apoplectic fit trying to deal with it.

You’ll be OK when the machines come for our jobs. There will always be a place for you in politics.

Remind me what I’m thinking of. A forum where posters awarded each other karma.

Or is this just fanta sea?

A few countries have done trials but no concrete conclusions. The present welfare system in some countries is a form of UBI. Printing money is nothing new as USA and a few others have been efficiently and effectively implementing this for stimulation, maintenance and sustainability of both American and global economies. It’s a matter of time that capitalism will evolve theoretically like all species scientifically on the planet.

Yeah, I have a feeling that’s what ‘likes’ were called on the old incarnation of the website. But my memory is shot to pieces, so it might have been some other forum.

Your memories shot? Hell I’m like that guy in that movie who has to tattoo his own name on his arm or something…

I’ve thought a lot about this in the past year (Yang’s book on it is a good primer) and the more I learn and think, the more I support it, especially if it were used to consolidate various other forms of welfare programs into something that is simplified and easier to manage. It’s a fantastic idea that preempts problems that (have already started and) are certain to slam into society over the next decade.

That said, I don’t think that a lot of gov’t’s are competent enough to pull it off.

I would like to see a few states in the US try it and see what happens before expanding it to a national program though that would get dicey being that you would need to generate revenue for it from inside that state. I don’t think that it would work in Taiwan as savings rates are higher than in many countries and a good percentage of the cash would end up out of the country. Switzerland voted against a UBI a few years back though their proposal would have been near enough to live on and people were afraid of the mass migration that would be sure to be the result of such a program

Economists appear divided on what such a program would do to inflation. If it were kept low enough (Yang’s proposal of $1k/mo would appear ideal in the US) the result would be acceptable.

I would fear that opportunistic politicians would campaign on a platform of increasing the UBI every few years. You could easily imagine a debate in which somebody proposed something like a $10k UBI - probably Bernie when he runs again in 2032.

That guy? Sure, why not?